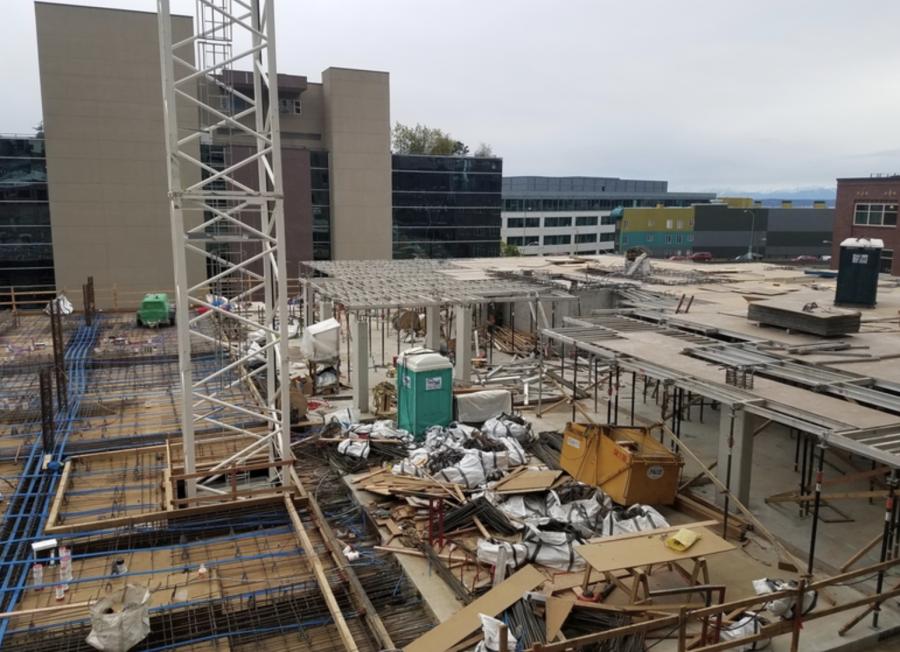 A crane cable apparently snapped at a construction project a couple blocks from Pike Place Market on Tuesday, sending debris crashing through the job site and onto a passing commuter's bicycle. Just weeks before, a local union had picketed the project, alleging unsafe worker conditions.

No one was hurt in the accident, which occurred in the late afternoon at the site of a mid-rise apartment building under construction at 2134 Western Ave.

Photos from the immediate aftermath showed a frayed or broken cable dangling from the tower crane high above the street. The debris appeared to have crashed through the framing of an upper floor. Below, wood pieces and other construction materials were strewn about, in disarray from the impact.

“They really dodged a bullet,” said Catherine Miller, who owns the Reclaim Décor furniture store and can see the job site from her shop across the alley.

It wasn't immediately clear what the crane was carrying at the time the cable failed.

Miller said she heard a loud crash and rushed out to see what happened. She saw about 30 to 40 workers initially “frozen in their tracks,” apparently in shock, then they all started running away from the job site, leaving their tools behind, she said.

“It was just an amazing exodus — within two or three minutes, the whole crew was gone running,” Miller said.

The state Department of Labor & Industries opened an investigation Wednesday and had a crane specialist on site, but had few initial details.

Dan Selin, president of Compass General Construction, the general contractor for the site, said in a brief email that the cable “failed” but his company hasn't yet figured out why. Compass is working with the state and the crane supplier.

State officials said it could take up to six months to figure out what happened.

“Our company views safety performance and keeping our people safe on the job as the key measurement of project success,” Selin said in the email.

Selin added that a passing bicyclist was unhurt after debris from the accident hit his tire. He did not respond to other questions, including who supplied the crane.

Pedro Espinoza, a senior organizer for the local carpenters' union, said the union already had been protesting safety standards and other concerns at the job site before the crane accident. Workers had picketed with signs a couple times in March, he said.

“The workers told us there's a lot of safety concerns that they have,” Espinoza said. “A majority of these guys are not adequately trained for safety. They're basically left on their own.”

Espinoza said their concerns have been directed at another subcontractor that doesn't handle crane work, but that the general contractor in charge of the site should be held responsible for all worker-safety issues.

Only some of the carpenters are returning to work, he said.

“Some of them are scared, and others are coming back to work because they need to work,” Espinoza said. “That's what happens on these sites. If you stop working, you're not making money for your family.”

Miller said she called the number listed at the job site to report safety issues on Tuesday evening, but when she told the person on the other end what happened, they didn't respond. So she just eventually hung up. Then the sign with the phone number was gone the next day, she said.

Records show state safety inspectors found five violations at three Compass projects since 2012, including four deemed serious, with the potential to cause serious injury. One, from a Seattle project in 2012, had to do with failing to put in place procedures to prevent a crane from touching a power line, an issue the company corrected.

More recently, state officials said they have done seven crane inspections at Compass projects in the last three years and found no violations.

The site is being developed by property owner Johnson Development Associates, a South Carolina-based firm that builds apartments and other projects around the country. The company did not respond to a request for comment.

Construction began last year on the eight-story building, which will include about 150 apartments above retail shops.

Construction accidents happen occasionally — three companies were fined just this week for an injury accident in West Seattle that involved a smaller crane operated from the ground, for instance.

But problems with the large tower cranes seen on the skyline are rare. The most notable local accident happened in 2006, when a tower crane collapsed in Bellevue, crashing into a building and killing a man in his home.

Seattle has more cranes than any city in the country, with 62 counted at the start of the year.

Construction remains among the most dangerous jobs available. Nine of the 70 people who died on the job in Washington state in 2015 were working construction. And 7 percent of full-time construction workers in Washington were injured that year — double the national rate.