Cranes Continue HOT Streak … and Not Just in Seattle


Though Seattle has led the United States in tower crane numbers for three years now, utilization in this particular crane sector is moving at a good clip all across the country. End users like today's tower crane models for the time and money saved with safe and easy installation, as well as the fact that with a panoramic view of the job site, operators can see exactly where they're placing the load. With the demand — even from users who hadn't considered them before — manufacturers are introducing versatile machines that meet specific needs.

Regional infrastructure projects, as well as work in the utility and mining sectors, are driving some of the popularity of technically-advanced tower crane models. Investments in construction and infrastructure transformation activities are supporting industry growth, according to a report by Global Market Insights. New tower crane distributors and rental companies, partnering with global manufacturers, are establishing themselves to help answer the demand.

In fact, tower crane rental numbers are growing. The focus for rental companies is on reducing the carbon footprint and pollution by providing the newest technology in the industry. Tower cranes are being rented for long-term installations on government and general infrastructure projects as end users move to save machine transportation and maintenance costs.

"Seattle has been the tower crane capital of the U.S. and it's not slowing down as of now," said Travis Felchlin, in sales and rentals for Linden Comansa America in Centralia, Wash. "People who don't usually use tower cranes are reaching out because it's easier to put a tower crane over an entire job site than have four or five industrial forklifts driving around when the operators can't see half the time where they're placing the product. A tower crane looks over the job and puts the load exactly where the crew needs it. It saves time and money when you can go as high as you want and get 12 feet of reach all around that tower. That's why they're becoming even more popular." 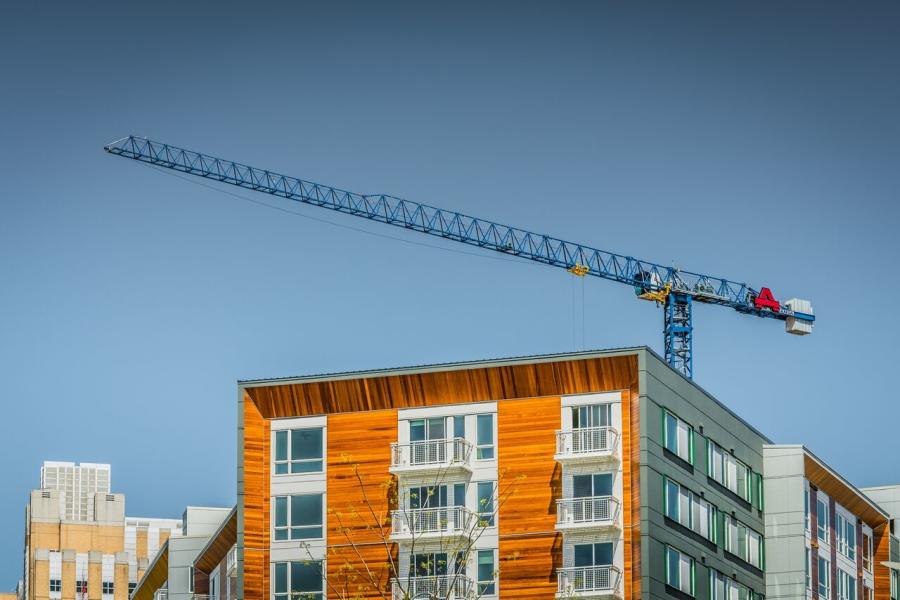 In a blog post, ENG noted that with high-capacity systems, these modern tower cranes can handle construction materials such as pre-cast concrete blocks and other large building components used in high-rise projects, such as those in San Francisco, where ENG Cranes USA is located. And because these heavy components require careful positioning, a tower crane's ability to offer effective control is of utmost importance.

Luffing-jib tower cranes are gaining popularity among tower crane styles. Designed with an extremely compact slewing radius they are ideal for work in downtown locations. Italian maker ENG's model EDL 120, with 14.8 ft. of rotation radius, is the company's smallest luffer model. With a main boom reaching 166 ft. and a maximum capacity of 11 tons, it is designed to be used in crowded city centers with limited space and congested urban streets.

Jobsite owners also demand faster tower crane disassembly, and ENG offers Model EDKH 185 as a stand-alone derrick for dismantling internal climbing cranes. It has 25 tons of maximum capacity, and the manufacturers touts it as one of the most powerful derricks on the market, "with which you can dismantle even the big 24-ton tower cranes," according to the company. A luffing version minus counter jib, with both internal and external climbing tower, is also offered for installation in close proximity to the building under construction.

Both luffers and flat-top tower cranes were introduced for the North America market this spring and summer. Manufacturers note that models not yet working in the United States will be on job sites here soon.

In April at Bauma, Manitowoc launched the Potain MDT 809, the largest flat-top tower crane ever produced by the company. Offering up to 39 tons of lift capacity and accommodating 262 ft. of jib, the crane is designed for use "anywhere large capacity is required at long reaches," but Mike Heacock, Manitowoc vice president, Americas sales – tower cranes, lists heavy commercial, infrastructure, bridges, and fabrication yards as ideal applications for the machine. One of Potain's newest models to arrive in North America, its standout features are its very strong capacities, erector-friendly design, low assembly weights, and proprietary CCS operating system and K850 mast system. The first unit is scheduled for installation on a job site in the Washington D.C. area this November, Heacock noted. 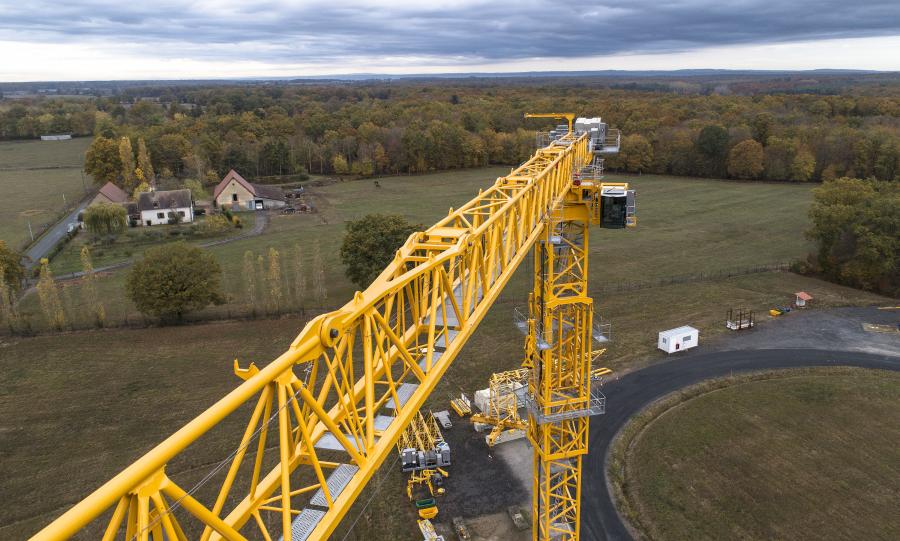 "This size crane was a hole in our product line, and building off of our very successful MDT product line we wanted a high-capacity crane which utilized existing mast components and common mechanisms to fill this void," he said. "We also wanted a construction-friendly design which could be assembled on commercial construction sites in a short period of time with a normal-sized assist crane."

Manitowoc engineers also aimed for a global product, which could easily be transported anywhere in the world in a minimal number of containers, but also transported to and from job sites on normal flat- and step-deck trailers.

"A lot of effort went into ensuring the design was not only a strong crane when erected on a job site, but also a crane which was easy and cost effective to move and assemble," said Heacock.

Potain also introduced the Model MRH 125 tower crane at Bauma. It works as a topless model, but can luff its jib to reduce footprint when it's out of service. Hydraulic power serves the luffing function to maximize efficiency. The MRH 125 can lift up to 9 tons, can be equipped with up to 164 ft. of jib, and can lift 2 tons at the tip of the longest jib. Maximum freestanding height is 190 ft., and maximum line speed is 387 fpm with 50LVF20 hoist winch.

The crane, designed for congested urban job sites also optimizes transport costs for a luffer in its capacity class, according to Potain. It can be mounted on the company's standard 5-ft. 6-in. or 6-ft. 6-in. K-masts, and is engineered for lower power consumption than traditional luffing-jib cranes. The jib can be raised from horizontal to near vertical (88 degrees) in two minutes, and the compact counter jib measures 23 ft. and connects easily during assembly. The out-of-service weathervaning radius with the jib fully luffed is 32 ft. 10-in. with any jib length.

And this summer, Manitowoc released the Potain MCT 325, another topless model. The new model offers an efficient solution for customers requiring strong and versatile cranes in the 13- and 18-ton classes. Another tool for projects where precast concrete is the star, it's also engineered to bring speed and simplicity to job sites. It has a 246-ft. jib.

Linden Comansa is marketing a new project-specific tower crane for mining and infrastructure including bridges, dams, and applications where the end user is hauling equipment down a hole. The flat-top Model 21LC1050 is available in a 50-ton version with a maximum radius of 262.5 ft. The load, reach, and mechanisms of the 21LC1050 offer an optimal result in large industrial or mining projects as well as for the construction of buildings with prefabricated and steel structures of great tonnage, according to the manufacturer.

The design of the horizontal slewing component of the 21LC1050 is similar to Comansa's 21LC750 and 21LC660 and allows a much faster and safer assembly. The 21LC1050 shares a large part of the jib and counter jib sections with these previous models, optimizing the investment to customers who already own these cranes. The flat top's counter jib, allows for different configurations, depending on the application. The short counter-jib radius avoids possible interference with buildings or other cranes.

"We're going to see two of this model on a job in North America," said Felchlin. "The good thing with this crane model is it sits on a beefier standard tower. You get that tonnage with long radius for picking, but you're able to put it on a smaller tower, reducing the cost of climbing. You have a more efficient crane."

"That's very tall for how big the crane is," he said. "And it's easier to climb than a bigger tower, so that means less money as well."

In July, Raimondi Cranes released another heavyweight luffing crane, the Model LR372. The factory, based in Italy, loaded the crane with proprietary high-performance winches on the 370-ton-meter luffer with a maximum jib length of 196.8 ft., and a maximum capacity 44,092 lbs. At the maximum radius, the LR372 can lift 8,366 lbs. using Raimondi's Ultralift mode, for the company's most powerful luffing crane to date.

Spanish tower crane manufacturer Jaso showed three of its newest models at Bauma. The Model J780PA, a luffing tower crane with a maximum capacity of 165,345 lbs., a maximum reach of 230 ft., and a maximum tip load of 12,566 lbs., it is designed to lift heavy loads in small spaces. Jaso's Model J1400 is a big hammerhead tower crane, the newest member of the manufacturer's Top Line - H series. It can handle up to 262 ft. of jib, lift up to 141,094 lbs., and pick tip loads to 23,148 lbs. It has a short tower top, modular and collapsible counter jib, and optimized transport and assembly dimensions. Jaso's stand will show the first images and video of this huge hammerhead crane.

The flat-top Model J560, has a short top profile, modular counter jib, and lay-flat counterweights. It features Jaso's short and strong boom tie that optimizes weight and height for transport and assembly without giving up the advantages of a typical flat-top crane.

At Bauma, new tower crane dealer Vertical Tower Cranes, Austin, Texas, was introduced. Bill Brandt, a tower crane industry veteran, has founded the company, which is the exclusive Recom dealer for North America. The Italian Recom tower crane is a new product engineered and built by Mariano Moritsch, whose father, Ferruccio Moritsch, began designing and building tower cranes in 1962 under the Comedil brand.

The crane gives customers nine different jib configurations from 82 to 213.3 ft. to meet varying jobsite needs. It has a maximum capacity of 11 tons at a length reaching 79.4 ft., depending on jib and counterweight set-up, and can hoist up to a 2.3-ton load at the maximum jib length. The proprietary Power Plus feature will temporarily allow for an increase of the maximum load moment under specific and controlled conditions by 10 percent, giving the operator extra lifting capacity.

Steady as She Goes

The commonality in all these new models is the fact that tower crane manufacturers are now, more than ever, designing with efficiency in mind. They're engineering for smooth transport and easy assembly and disassembly because the country's top tower crane installers and operators want to work with a quality product. As Felchlin of Linden Comansa put it, "good erection teams and tower crane operators take pride in their work."

He believes that with the fatal jobsite accidents this year, safety is front and center in the tower crane sector. That shows in how the industry is policing itself, said Felchlin: