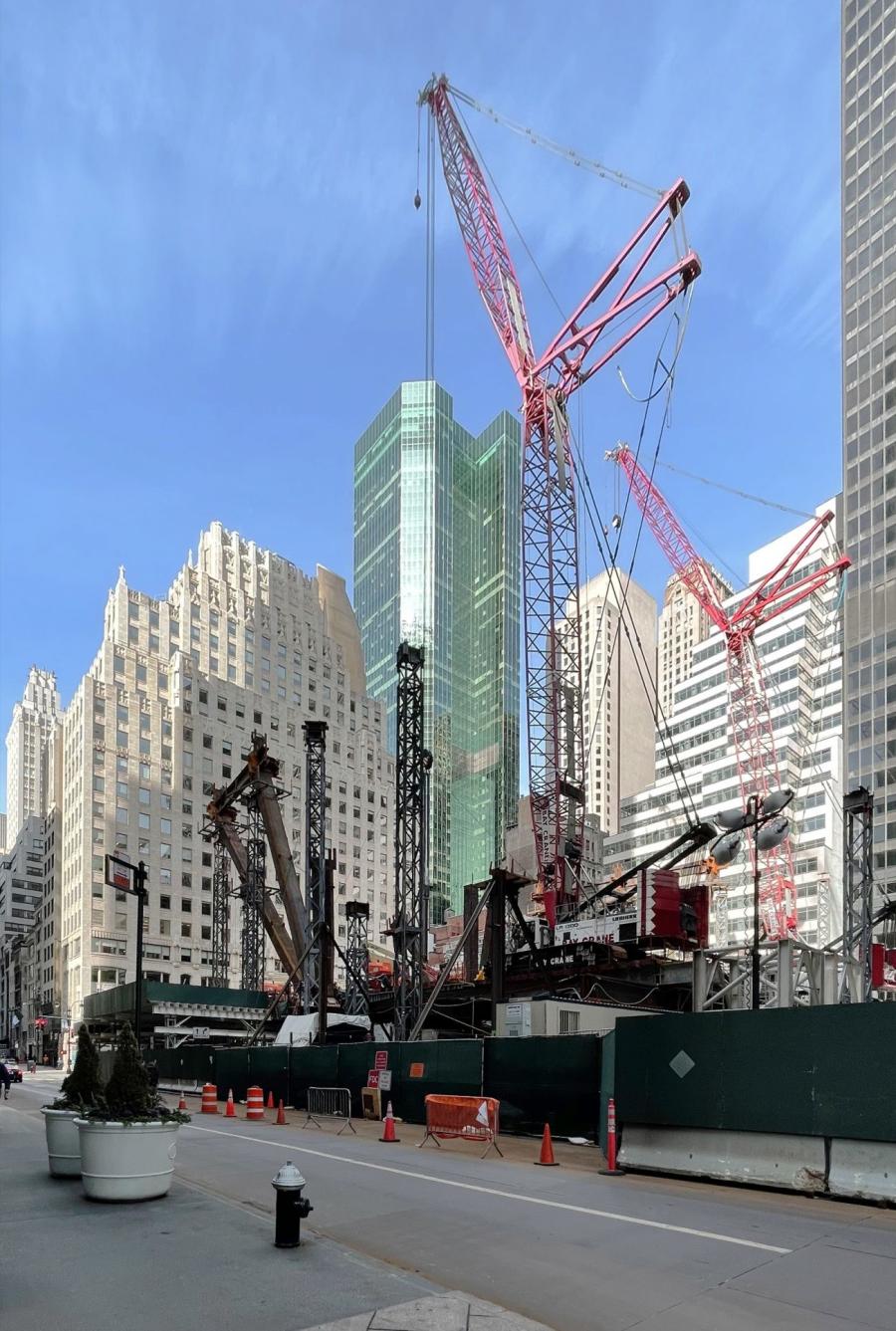 A fleet of construction cranes is assembling the massive framework that will eventually culminate in one of the tallest buildings in the New York City. (Michael Young photo)

The steel superstructure for JP Morgan Chase‘s new 1,425-ft. supertall headquarters continues to rise on the western half of 270 Park Avenue's full-block parcel in Manhattan, N.Y.

At the same time, work continues to progress on the demolition of the company's mid-century 707-ft.-tall, 52-story former home on the opposite end of the Midtown East lot, formerly referred as the Union Carbide Building.

Across the block at the new construction, workers are now busily lifting and welding new steelwork along Madison Avenue between East 47th and 48th Street, where the low-rise podium of the original skyscraper once stood.

Recent photos show the rapid progress on the superstructure of the 2.5-million-sq.-ft. skyscraper since the beginning of February, when the first steel beams began to emerge from the site. A forest of construction cranes is assembling the massive framework that will eventually culminate in one of the tallest buildings in the New York City.

The scale of the colossal dimensions of the steel columns for the dramatic angular base, which will be a clear focal point in 270 Park Avenue's design, are easily recognizable to passersby, as well as people working in nearby buildings. Temporary metal scaffolding columns have been erected to support portions of the steel and will likely remain in place until more components are welded to bolster the frame's integrity. Rectangular platforms with wooden floors have been built for crews to work closer to the joints in the steelwork.

Perhaps the most interesting section of the steel assembly features four long diagonal columns fanning out from a single point.

Meanwhile, the original building continues to be dismantled with light clouds of dust blowing across the top of the highest floors from multiple excavators tearing apart the old office levels. Only a handful of floors remain above the main lobby, and temporarily rest behind the black netting and scaffolding.

The intricate steel connections in the superstructure also rise from the ground in a complex matter.

A final rendering and completion date for 270 Park Avenue have not been released.