It took subcontractors three years to remove the contaminated radioactive materials from the site, a former nuclear research and depleted uranium weapons facility. 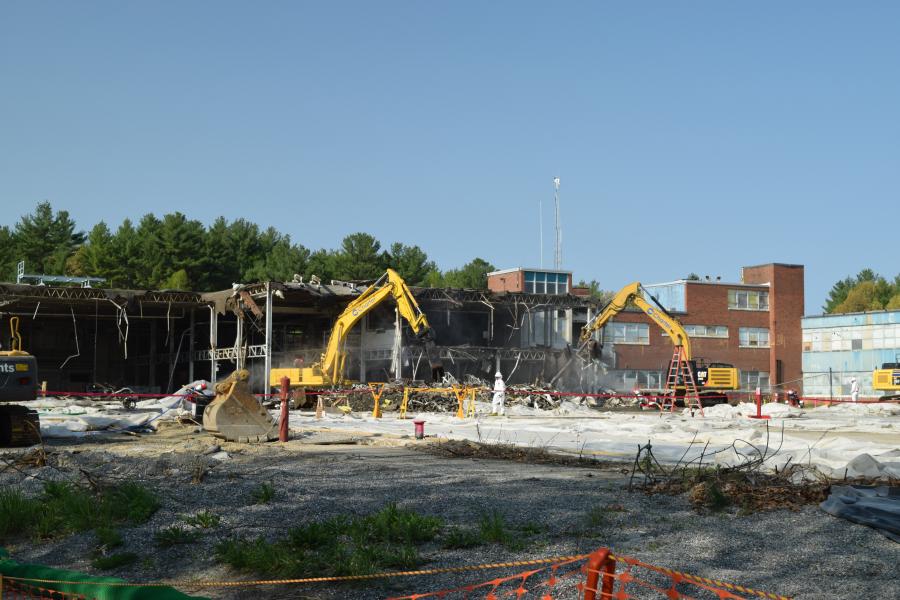 It took subcontractors three years to remove the contaminated radioactive materials from the site, a former nuclear research and depleted uranium weapons facility.

A key phase of the clean up of Starmet Corporation, a superfund site in Concord, Mass., was recently completed by de maximis inc. The main work was finished last August — under budget by $15 million.

It took subcontractors three years to remove the contaminated radioactive materials from the site, a former nuclear research and depleted uranium weapons facility. The buildings were demolished over a five-month period.

• removal of the foundations and underlying contaminated soil and sediment with an estimated volume of 82,500 cu. yds. (63,076 cu m);

• containment and stabilization of a former disposal pit;

• treatment of depleted and natural uranium in groundwater;

• treatment of volatile organic compounds and dioxane in groundwater; and

In 1958, the site — an off-shoot of the Manhattan Project — had contracts with the United States Atomic Energy Commission and Department of Defense, along with some private industry contracts. These operations included the investigation and development of materials for missiles, airframes and other components.

“We took out materials that filled a total of 912 32-cubic-yard inter-modals totaling 11,738 tons that were shipped off site for land disposal at U.S. Ecology Idaho,” said Bruce Thompson, director of de maximis. “The building structure volume consisted of 7,494.8 tons and that was transported off site in 479 inter-modal containers during Phase 3 demolition activities.”

When inside, workers used reciprocating sawzaws with metal blades for the internal demolition. The sawzaws were disposed of due to contamination, as was much of the equipment used on the clean-up.

“We used and destroyed pretty much every brand — some lasted just days,” said Baker. “We were hard on the equipment.”

The containers used for the debris were tarped and shipped by truck to New Jersey and then sent by rail to Idaho. The containers were brought inside buildings and loaded. Roll-up doors minimized the chance of debris and dust being released.

“Performing as much work as possible in the interiors before the demolition was a significant decision,” said Thompson. “This way we controlled the potential for release of dust. We inherited a certain amount of equipment with the buildings, and we bought some used equipment in good shape knowing that by bringing it inside, it had the potential to be contaminated and not be reusable economically without tearing it apart.”

Crews gathered material room-by-room, with sawzaws being used to cut desks and filing cabinets into smaller pieces. There were also rooms stacked floor-to-ceiling with old computer monitors that were partially contaminated. A small Volvo EC160B excavator with a grapple attachment was purchased to help with the removal of material.

“There were hundreds of containers of acids, greases, oils, and an incredible variety of chemicals and contaminants to deal with,” said Thompson, “so inventorying and neutralizing and stabilizing them for shipment was crucial. Removing them took three years. We started with the high hazard waste first — chemicals and combustibles — to reduce the risk of working inside. The second phase was to remove the equipment and manufacturing items — there was an 80 by 40 ft. (24 by 12 m) room full of contaminated lathes and milling machines that had to be deconstructed.

“Then we started taking out the ventilation ductwork, that prior to filtration, had significant amounts of uranium and beryllium dust,” he added. “DU dust, until it oxidizes, is considered to be pyrophoric, which means it could spontaneously ignite. That's not a trivial hazard, and it was a painstaking process to remove the ductwork and then block it off at the roofs. This is when we removed the ventilation structures.”

With the buildings emptied, all flat surfaces throughout the interiors were HEPA vacuumed and then sprayed with a lockdown agent, similar to latex paint, to have the contaminated materials adhere to the building structures.

The vast majority of the equipment for the interior work was disposed of, but the excavator, and some of the forklifts and manlifts were decontaminated, verified clean and recovered for further use. The disposed of equipment, including scissor lifts, had their batteries drained and fluids removed.

“That we got some of it out was a bonus,” said Thompson.

The EPA was the lead regulatory agency, and the Massachusetts Department of Environmental Protection (MassDEP) also participated. de maximis prepared and submitted clean-up and demolition work plans to the EPA and MassDEP for review and approval. The EPA required the monitoring for the air around the work zones to ensure that concentrations of contaminants did not exceed regulations.

“The buildings were demolished from the top down in a controlled manner to reduce the generation and potential spread of contaminated particulates,” said Mike Wagner, Charter's project manager. “The excavator was used to grasp the steel structure and the shear used to cut the building members. The debris was then lowered to the concrete slab. All the debris was then sized using the shear to allow loading for offsite transport and disposal.

“Dust control was extremely important for this project due to the contamination known to be in the building,” he added. “Dust was controlled using multiple misting machines which produce small water droplets which knock down the dust caused during site activities.

“The temporary cover system was installed after the concrete slab was cleaned and any damaged concrete repaired. The cover system is essentially the same material as used on a flat commercial roof and is made up of a layer of geotextile fabric to provide a cushion and a layer of EPDM anchored to the concrete slab with anchor bolts and screws. The installation of the cover system was performed in stages as the building demolition moved from one building to the next. All the work was performed during normal work times as called out in the approved documents.”

The final site clean-up is under negotiation and is expected to cost at least $125 million and start in five years.

“When we started out,” said Thompson, “there was a high level of concern, which was completely appropriate, given the risks associated with this work. As we got control of the site and cleared the high hazard wastes, we reduced the risk. We have worked on other superfund sites with radiation contamination, but this is our first major demolition and site stabilization project with these contaminants. Prioritizing and creating a progressive schedule was a real challenge.”

For Baker, the challenge was working in a nuclear regulatory environment.

“I arrived here with a substantial amount of demolition experience,” he said. “Taking the equipment apart and the buildings down was the easy part. Removing the contaminated material was another thing altogether.”—CEG