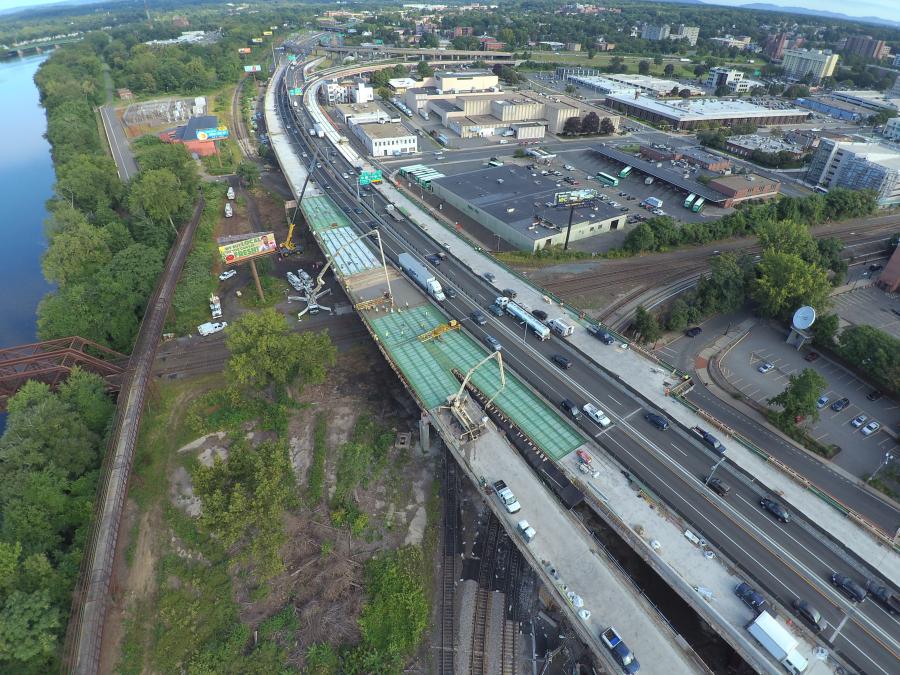 The work zone, in a major part of the city, included sections of the I-91 northbound and southbound, just south of State Street to the I-291 interchange ramps, and the replacement of various on- and off-ramps and sections of road.

While there is still work to complete on the $183.3 million Massachusetts Department of Transportation (MassDOT) I-91 Viaduct Rehabilitation Project in Springfield, Mass., the pouring of new concrete decks has been completed nine months in advance of the August 2018 benchmark to achieve full beneficial use (FBU).

The project was awarded to the joint-venture of J.F. White Contracting Co. and Schiavone Construction Co. LLC, with work beginning in July 2015.

What makes this project unique is the way that the concrete was poured on the 4,800-ft.-long bridge (three lanes in each direction), which was done in two phases. For the second phase, crews poured between 350 and 400 cu. yds. of concrete every Friday.

The work zone, in a major part of the city, included sections of the I-91 northbound and southbound, just south of State Street to the I-291 interchange ramps, and the replacement of various on- and off-ramps and sections of road.

FBU marked a milestone of the work schedule, which gave the J.V. a $9 million ($50,000 per-day, six months) bonus for the early completion. The remainder of the work, which does not impact traffic, includes re-painting the bridge and removing lead paint, and miscellaneous steel repairs.

“We accelerated the project with a large work force,” said Bob Murphy of J.F. White, the project manager. “Being ahead of schedule was in our baseline when we planned the project. We turned in a very aggressive baseline schedule, saying we were going to achieve the maximum incentive. It's a position we had to take upfront to show that we wanted to make that milestone.”

New England winter weather conditions dictated the accelerated schedule, which meant that to meet the February 2018 deadline for FBU, the steps to achieve it needed to be complete by the end of 2017.

“We hit all our target dates by no less than a few weeks all the way through,” said Murphy. “If we lost a week, we would pick it up in another week. It was a well-planned job, with a terrific superintendent in Chris Pehl, who has been with the project since May 2015.”

“We set goals for each construction season and then broke the schedule down monthly, weekly, and finally, daily by trade and subcontractor which helped organize the work immensely” said Pehl. “The size of the project was so large and there were so many different crews and trades each with their own issues that it could easily feel out of control. The entire JFWS team and a team of excellent subcontractors came together to gain speed and efficiency.”

The key was good communication and planning. The first five months was a big learning curve — this bridge has 600,000-sq.-ft. of deck, and once we got through that first phase, everyone knew exactly what to do and when it needed to get done — they really performed,” said Murphy. “We had smaller cranes, several material handling loaders, and many high capacity heavy-duty forklifts and telescoping forklifts.”

Other equipment included big hydraulic hammers to take out the old decks and jackhammers to clean the tops of the bridge's beams.

Rather than do daily pours for the second phase, each Friday was set aside for pours between 350 and 400-cu.-yds. of concrete, which covered six spans. The bridge has 96 spans.

To ensure that the pouring was efficient, an additional pump was kept on standby when one or two pumps were in place to receive the concrete. The ready-mix concrete was supplied by Construction Service, which has a concrete batch plant located a few miles from the viaduct project location off Route I-291 in Springfield.

The company has a fleet of front-end discharge mixers which deliver concrete throughout the western Massachusetts area and is very committed to the maintenance of the fleet.

This project required approximately 25,000 cu. yds. of concrete to be delivered to the project site.

Planning the placements is one thing, as is having a set-up and people to execute the work. This was all dependent on Construction Service manufacturing and delivering the concrete on schedule and sequence so that not a moment was lost.

Olds worked hand-in-hand with the joint-venture's management staff and often visited the job site to ensure that everything went as planned.

“J.F. White did a very good job of organizing a delivery schedule and it worked out very well for us,” said Olds.

With approximately 10 trucks making continuous runs between the bridge and plant every Friday, nothing could be left to chance.

“It's a continuous operation as you can't prepare the product the night before or in a matter of minutes,” said Olds. “We can typically manufacture 10 cubic yards in roughly five minutes, so we have the ability to manufacture approximately 100 cubic yards in an hour. They were dumping consistently about 60 yards an hour for each span placement, so it was fairly comfortable for us to manufacture the quantities they required. Our dispatch team did an excellent job balancing the needs of this project and those of our customer base.”

The bridge is used by many Springfield commuters and trucks of various sizes throughout the day, so even though the distance was short, being aware of traffic conditions was paramount.

“Our drivers got used to it,” said Olds. “Most times that they poured the pump location would be set up in different areas. We would typically start earlier in the morning, between 5 and 6 a.m., so the traffic was light and our drivers would get into a routine for that specific day. Many times, it was staying off the highway and driving through the city. There were times when they had lanes either on East Columbus Avenue or West Columbus shut down because the concrete pumps were set up there.”

Olds noted that his firm has many experienced hands that have worked on large projects, be it in production or delivery. In fact, some of the staff helped supply concrete for the repairs to the viaduct in the late 1990s, which included patching the deck.

While few lessons were learned on this project for Construction Service, it honed skills.

“It was like having 100 different bridge pours over the course of 24 months,” said Olds. “We have a very good crew of drivers and experienced quality control staff.”

“It was pretty impressive to get it done — it was a first time for a lot of us and something to see,” said Murphy. “We had a team of engineers and superintendents, and constant meetings and planning every day. The planning evolved at different times, but once we understood the work and the access points, we could get the flow. Many of the techniques we used on this project can be repeated, but this was more unique because we had such length here. It's almost 5,000 feet each barrel, so you could spread it out.”

The J.V. is being assisted by 23 subcontractors. Murphy described the work of all involved as a constantly moving train, with various crews and subcontractors completing tasks essential to replacing the concrete decks.