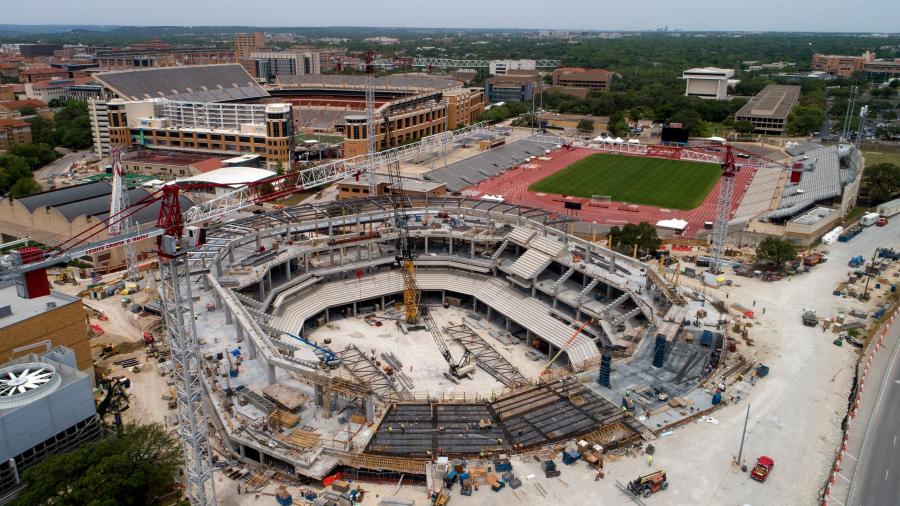 The newly opened $375 million Moody Center serves as home to the University of Texas at Austin’s men’s and women’s basketball teams and as a concert and special events venue. Gensler served as the architect; AECOM Hunt: construction manager; Oak View Group: developer/operator; and CAA/ICON: project manager. (University of Texas photo)

When she was asked for the vision that drove the design and development of the newly christened Moody Center at the University of Texas at Austin, Laura Brodersen responded, "To create something uniquely Austin."

As lead project architect, Brodersen and her team from the Austin offices of the international architecture, design and planning firm, Gensler, together with general contractor AECOM Hunt, said to be the nation's large builder of sports facilities, took this vision to a different level, literally.

Surrounded by a multitude of 200-year-old oak trees, the 530,000-sq.-ft., 15,000-seat arena is built into a hillside, resulting in a 40-ft. drop from east to west. The location, and Austin's Capital View Corridor ordinance for preserving views of the State Capitol from various vantages throughout the city, provided a challenge: how to limit the height of the building to comply with the ordinance. 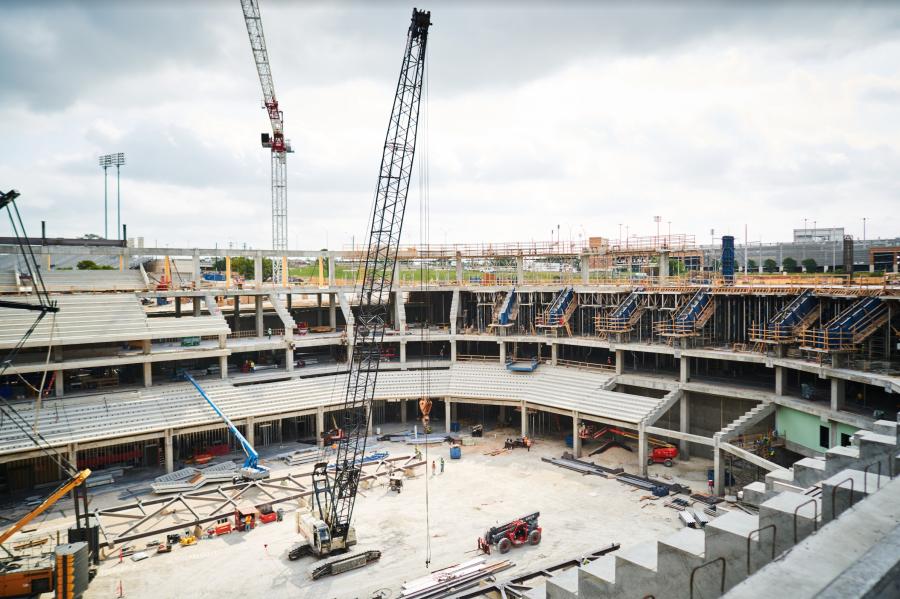 "Though it was a challenge," said Brodersen, "this worked in our favor as we were able to capitalize on the hillside by using the slope to provide walk-in access at every level," rather than having a single entrance and requiring patrons to climb stairs or take escalators to their seating areas.

Moreover, because of the site's proximity to the university's Mike A. Myers Track and Soccer Stadium on the north side; the campus's main utility building on the south side; the realigned Red River Road on the west side; and Interstate 35 on the east side, "there was about 80 feet of lay down and staging area on each of the four sides, which meant we had to be especially practical when it came to coordinating when and where materials arrived," said Perkins, who worked with more than 100 subcontractors, including 30 prime, and was responsible for 500 to 1,000 workers on any given day.

Despite beginning the project in February 2020 just before the pandemic reached full throttle, Perkins and his team stayed on track, with overtime, weekend shifts and working multiple work sites — instead of working in a linear fashion from spot to spot — compensating for quarantined workers.

Perhaps the most important component of the Moody Center can be expressed in two words: flip it.

"The goal was to take the 45-year-old, solid-wall Erwin Center [soon to be razed] and flip it," said Brodersen. "That is, to avoid the closed-in nature of a solid-wall dome and create a strong two-way connection with the university and the city of Austin. We accomplished that by creating an upper concourse with 360 degrees of glass so that wherever you are on the concourse, you can see the university and the city. And if you're driving or walking by the center, you can see activity inside the venue."

This, and other features, were helped greatly by the shared commitment of Gensler and AECOM Hunt to facilitate close and continuous communications.

"Typically, there were two or three weekly meetings to fine tune working details for accomplishing the aesthetics that the architects sought in practical ways," said Perkins. "To be sure, there were lots of RFIs [requests for information] to clarify and ensure exact information." 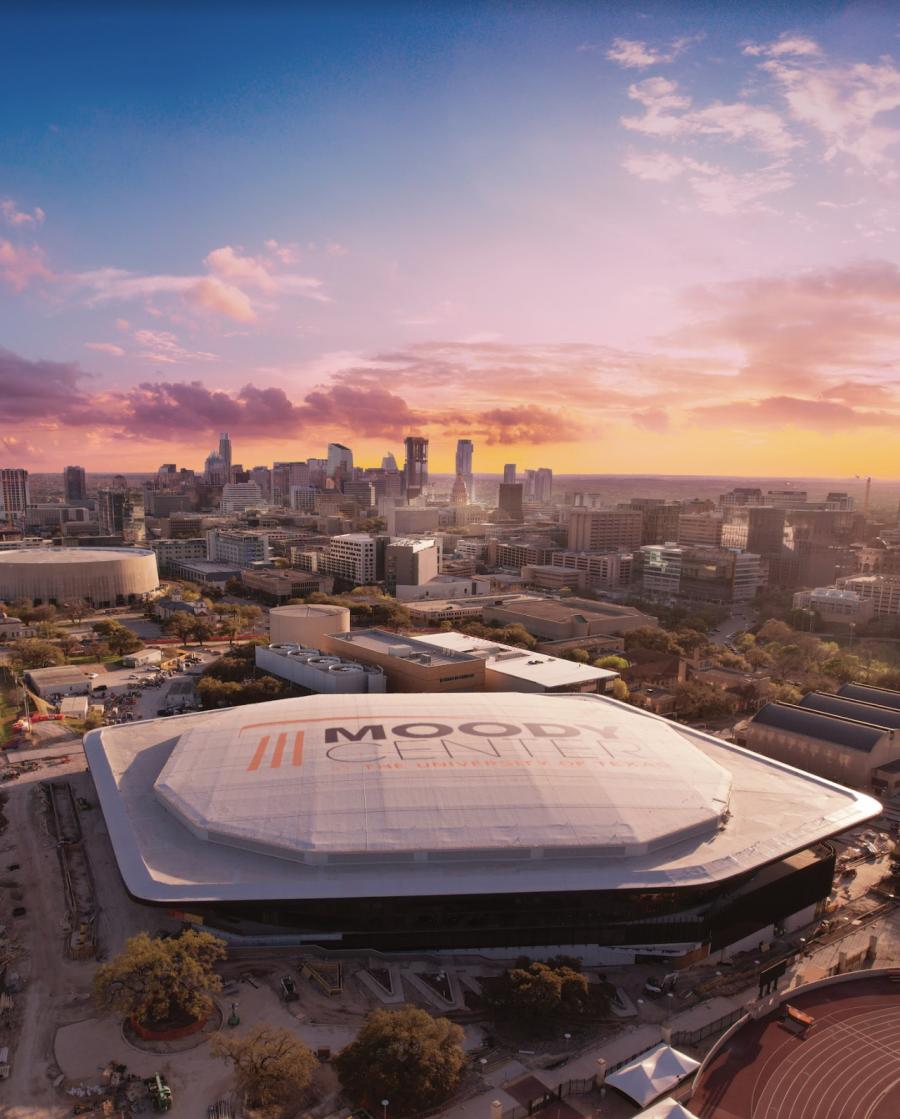 Topping it all off was a 70,000-sq.-ft. canopy made of 4,129 individual panels of Parlex Prodema, a wood/resin combination product.

"The wood/resin cladding wraps the underside of the awnings and becomes the ceiling and wall surface inside the building, connecting the indoors with the outdoors, with the 360 degrees of glass framing it. The look of the canopy honors Austin's connection with nature," said Brodersen.

"The canopy called for using full sheets wherever possible," said Perkins, "thereby minimizing the number of cuts, which were then limited to the transition panels reaching the face of the soffit. The bulk of the canopy was accomplished with the full panels requiring no cuts, resulting in less waste, less labor and a better fit."

Brodersen added, "And we were able to keep the wood veneer and its aesthetics. This is an important example of how Gensler and AECOM Hunt collaborated throughout the process to weed out excesses while keeping the project beautiful and intentional."

Another way project teams "flipped it" comes in the form of the venue's displacement ventilation system for climate control. Unlike conventional air conditioning systems for sports/entertainment facilities that circulates cold air from above and pushes it down, this newfangled system works in reverse. That is, air is fed from vents in the seating bowl, resulting in fresher air for everyone because unlike air from above, the air from the seating-bowl vents has less chance to mix with everyone else's air."

"Every 16 inches or so, there's a radius diffuser hole that had to be boxed out and formed in all of the precast risers," explains Perkins. "It's like having to create Swiss cheese out of the precast."

"In the end, the Moody Center delivers what we wanted most, a venue that represents Austin in a most authentic way," said Veronica Cantu, vice president of marketing at Oak View Group, an ownership group that, along with partner CAA Icon, will fund and manage the project for 35 years, after which the university, as owner, is expected to assume those roles. 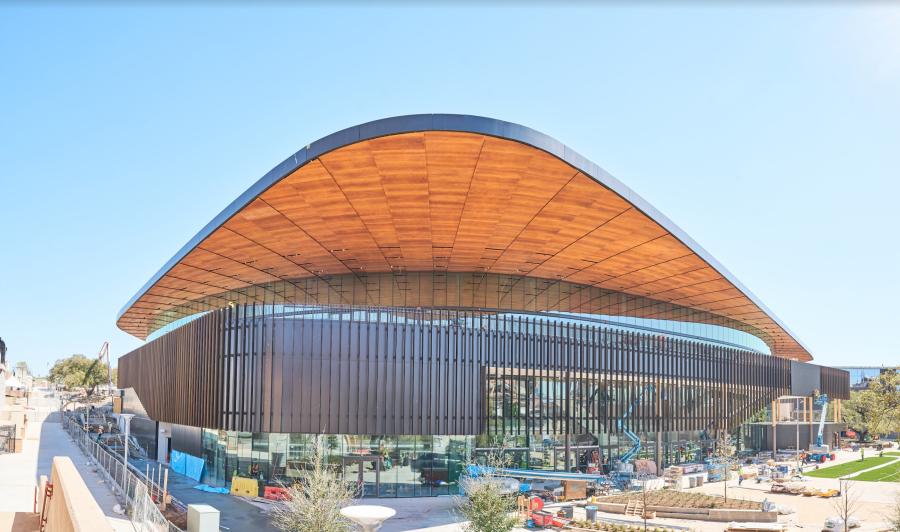 "What I love is that we're representing our city in a positive way — from the huge murals by local artists to the way that the venue connects with the local environment. The Moody Center captures the vibe of city," she said.

"Not only that," Cantu continued "the Moody Center is a Sharecare Verified facility with confirmed adherence to more than 140 standards across more than 600 checkpoints having to do with health and hygiene protocols, air and water management, the attendee experience, and health safety communication with patrons and employees. We are pleased to be recognized as an ecology-oriented LEED [Leadership in Energy and Environmental Design]-certified building.

Moody Center At a Glance

Origin of name: In honor of a $130 million grant to the school from the Moody Foundation;