Construction crews in Birmingham, Ala., are making dramatic changes to an Irondale nursing facility that focuses on resident-directed care. 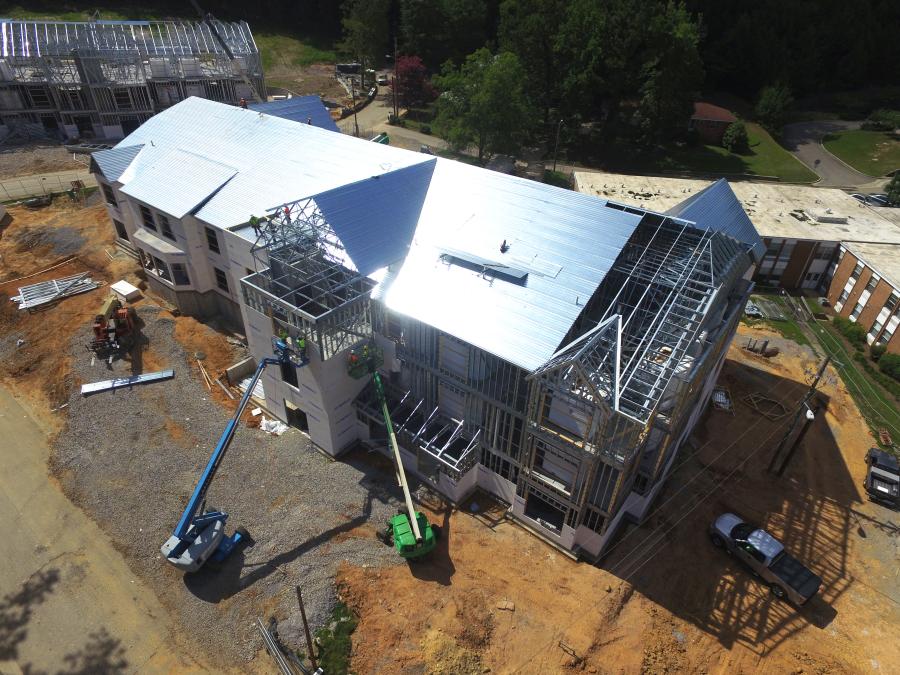 Construction crews in Birmingham, Ala., are making dramatic changes to an Irondale nursing facility that focuses on resident-directed care. The $42 million Fair Haven Retirement Community project consists of more than 200,000 sq. ft. (18,580 sq m), including renovation of the existing campus and new senior living buildings. A separate, $8 million Methodist Homes project in Dothan, Ala., is undergoing a transformation, as well.

“Fair Haven and Wesley Manor are embarking on a journey to change the lives of elders, regardless of their health condition,” said Christopher Tomlin, president and CEO of Methodist Homes of Alabama and northwest Florida. “Our commitment is to create homes designed to encourage a meaningful life, even when extra help, medical care and assistance are needed. These homes will include associates who are committed to providing excellence in clinical care in the sanctity of the home that residents choose to create.”

At Fair Haven, there are three new buildings being built from the ground up, including a three-story long-term care structure, a two-and-a-half story rehabilitation building and an assisted living building that connects to some of the existing structure. Characteristics of Tudor-style homes were integrated within the design, both inside and out. Wesley Manor residents, meanwhile, will take advantage of a new rehabilitation building and extensive interior renovations of five existing wings. The work includes exterior upgrading and renewal. Both facilities will adhere to what is known as a “household model”.

“In a household, smaller groups of residents live together and share a private entrance, kitchen, living room, laundry room and other home spaces,” Tomlin said. “Each resident has their own private room complete with bath. In addition to the physical changes, creating home also means residents direct their own lives. Fair Haven is paving the way for change in how the industry provides medical care and other services without the traditional regimented schedules. Reframing of the organization is underway to train and empower associates to make day-to-day life meaningful for each resident.”

The Board of Trustees of Methodist Homes of Alabama and Northwest Florida set out to create a master plan for Fair Haven and Wesley Manor in 2005. Both communities were originally constructed in the 1960s, and even though they have undergone extensive refurbishing and additions through the years, the board determined Fair Haven and Wesley Manor would both eventually need significant redevelopment.

“These efforts began with a relationship developed with Steve Shields, CEO of Action Pact. Methodist Homes came to appreciate and adopt Steve Shield's vision for a long-term care industry that discards the institutional model of care and embraces creating home for people in need of health services. Methodist Homes engaged in a bond issue in January 2016 to raise the capital to turn its dream into reality, and broke ground on both projects a month later.”

Tomlin said while physical changes and the redesign from institution to home are dramatic, the internal organizational transformations taking place are just as significant.

“A steering team has been formed at both Fair Haven and Wesley Manor, made up of individuals from a variety of professional disciplines, and they are guiding and creating the policies and procedures that will operate the two communities toward the most person-centered, resident-directed care that is possible.

“Meals will now be prepared and served in the households in family-style dining, on the residents' schedule. This means no more clunky metal dining carts lumbering noisily down hallways carrying trays with plastic coverings over the food. No more nurses stations. No more med carts. No more tearing away at the privacy and dignity of a human being to fit the routine and convenience of staff. It takes a lot of vision, determination, planning and training to totally transform workday systems that have been in place since the 1960s, and which are still being taught in well-meaning health care education systems today,” Tomlin said.

Golden Construction of Birmingham is overseeing the renovation and expansion of both centers. According to Hunter Benton, project manager, work continues at a steady pace at Fair Haven.

“The schedule is the biggest challenge on this project. It requires us to bring up all three buildings at the same time. This puts a tremendous load on the available manpower resources. We have countered this risk with our use of pre-fabricated modular bathrooms, pre-panelized structural walls, pre-assembled MEP components and our production system.”

“Despite some difficulties with the conditions of the soils and a major hillside that wanted to slide on us, we were able to get the structure up on time,” said Benton. “We are finishing up the MEP rough-ins, starting drywall and finish work on the interiors and working on the exterior skins of the buildings.

“We have been somewhat lucky with weather. Although we had a fair amount of rain in the early months of the year, we were able to avoid any major delay related to weather. We will be at risk for weather-related delays during our renovation of the existing skin/roof during Phase II.”

Benton said crews are working to hang sheet rock and finish at all three buildings, and to complete Phase II, which will include a large demolition job.

Crews are providing new utility lines to the stand alone buildings and had to relocate several utilities to allow the required functionality of the campus.

“Prior to the start of Phase I, we had an existing wing to tear down for a new wing to be built in its place, along with several single family homes that were required to be demolished prior to earth work starting for the stand alone buildings. We had a significant hillside to be cut down for one of the stand alones, and a surcharge required for the other,” Benton said.

According to Benton pre-fab efforts have allowed workers to overcome an extremely aggressive schedule.

“We installed 105 pre-manufactured bathroom pods for the two stand alone buildings. These pods are being provided by SurePod out of Orlando, Florida. We installed pre-panelized structural wall panels, and our MEP trades are utilizing pre-assembled MEP components.”

The dsi panels were set with a rented 70-ton (63.5 t) hydraulic truck crane. Pods were set with 115, 175 and 200-ton (104, 158 and 181 t) hydraulics. Materials being used during construction include metal studs for walls, brick/stone/EIFS for the exterior skin and a mixture of carpet, tile and vinyl plank flooring.

For Benton, overseeing the construction efforts is a responsibility the company takes seriously.

“As the general contractor, we cultivate the building team and work daily serving this team to ensure they work and function together at the highest possible level. ”

The household model being used during construction was developed by Kansas City, Mo.-based Action Pact.

Casey Culbertson AIA, LEED AP, Action Pact Design Group, said, “Action Pact is a company driven to change the way we age. There are several arms to our company, all integrated together to achieve this goal. Action Pact Design is the architectural component of that. We were responsible with the physical components — making sure the design complemented the organizational restructuring that is taking place. Action Pact also has a team that helps implement the organizational transformation. We are also making sure that the overall project is financially feasible, and helping insure that the project remains within the guard rails of the major financial ratios.”

The project needed to be split into two phases. Phase I is expected to be completed early next year, with Phase II finished by August 2017.

The first phase is all new construction. The first of the three buildings is attached to the existing building and is a portion of the three assisted living household cores, as well as half the assisted living apartments. The second building is two-and-a-half stories. It's described as a dedicated short-term stay building and contains two STS households. This building also will contain a geriatric dental clinic, in partnership with the University of Alabama at Birmingham, as well as a dedicated pharmacy and a physical therapy/occupational therapy gym. The third building is three stories and has three long-term care households.

The renovation, Phase II, is fairly extensive and consists of stripping most of the original 1960s building to its structure.

“This will house the other half of the assisted living apartments, 15 new independent living apartments and a renovation of the existing campus community spaces,” said Culbertson. “This will include an ice cream parlor, bistro and living room.”

Fair Haven will be the first in the state to implement a fully integrated organizational transformation to the household model.

“This transformation is not just freshening up spaces, but an entirely new way to age where people still remain in the driver's seat of their own lives. They wake up when they want, eat what they want, etc. The design and functionality of the households does not pair well with herd mentality. There are smaller spaces, resembling spaces within your own home that allow residents to partake in their own daily pursuits. The result truly is home — a stark contrast from the typical noisy, busy, cluttered reality within nursing homes these days,” said Culbertson.

For Tomlin and his team, it's extremely important to offer buildings that feel less clinical, and more like a home.

“The nursing home resident of the past is not the nursing home resident of the present or the future. Today, seniors have higher expectations about the control they want and expect to have over their own lives, regardless of their health condition. People want to live at home. When health conditions make it impossible to live at home without assistance, we can give them 'home' with assistance.”