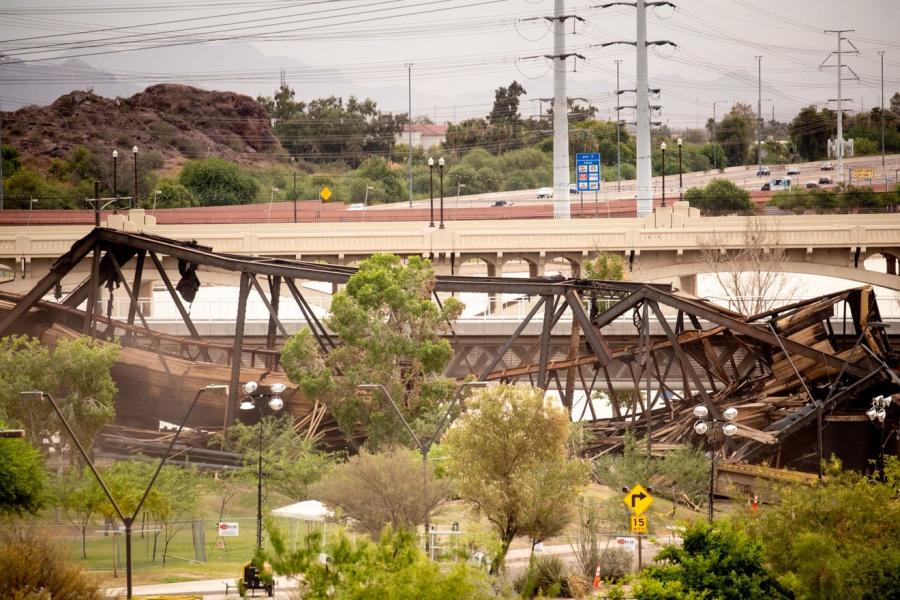 A 150-ft. portion of a century-old bridge was demolished as part of the cleanup process after the bridge was damaged in a train derailment and fire in the city of Tempe and many partners assisted Union Pacific in the demolition.

A 150-ft. portion of a century-old bridge was demolished as part of the cleanup process after the bridge was damaged in a train derailment and fire in the city of Tempe and many partners assisted Union Pacific in the demolition. Partners included Valley Metro, Southwest Gas, APS, SRP, ADOT, EPA and ADEQ.

The demolition involved small precision charges placed in precut locations around the base of a small portion of the bridge, so that the damaged section and cars fell in a controlled manner between the south bank of the lake and Rio Salado Parkway onto a grassy area.

Three days after the derailment, crews successfully finished removing the flammable industrial chemical, cyclohexanone, that was in three tanker cars at the scene. The chemical was removed to other cars and taken away from the site. Now that the demolition is completed, crews will be able to clean the cyclohexanone residue from the tanker cars that had contained the chemical so that they can be safely disassembled and removed from the area.

Investigations are ongoing into the cause of the derailment.

Union Pacific Railroad officials said the demolished portion of the bridge will likely be cut into smaller pieces so it can be removed and there isn't a timeline yet for when the bridge will be reconstructed.

Eight to 10 cars of a 102-car Union Pacific freight train traveling from Tucson to Phoenix derailed around 6 a.m. on June 29 on a railroad bridge over the man-made Tempe Town Lake.

The derailed cars were carrying lumber and hazardous material and burst into flames, causing the century-old bridge to partially collapse on the south end.

Tempe Fire Department Assistant Chief Andrea Glass said the partial demolition involved putting charges around various parts of the bridge in addition to small incisions which allowed for the most damaged section of the bridge to drop below.

Glass said the detonation wouldn't impact the rest of the bridge and about 100 workers, mostly contractors, were working to clean up the derailment site.

Information about the derailment and the bridge's history is available at tempe.gov/RailroadBridge.