A $63.4 million undertaking overseen by the Minnesota Department of Transportation (MnDOT) is inching closer to completion, as crews dismantle an aging structure that's clearly past its prime. The Red Wing Bridge Project includes the Highway 63 (Eisenhower) Bridge over the Mississippi River and the Highway 63 Bridge over Highway 61, as well as the highway connections to Highway 61, Minnesota Highway 58 and approach roadways in Wisconsin. 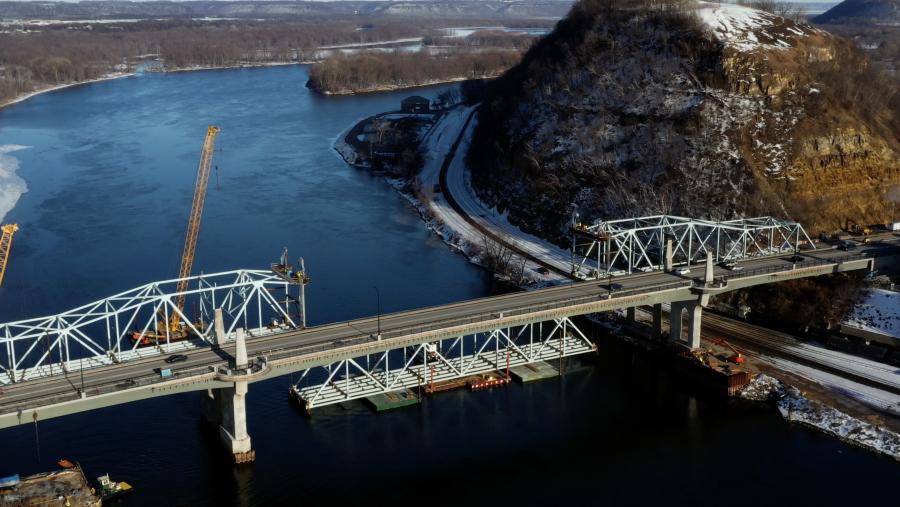 "The final removal of the old Eisenhower Bridge and final site restoration has taken place," said Al Greco, project manager of general contractor Zenith Tech Inc., of Waukesha, Wis. "Construction of the new 1,600-foot bridge was completed in stages, starting with drilled caissons and pile installation. Our crews moved on to building the piers and abutments of the new structure in 2018. During that year, pre-stressed beams went up on the Wisconsin side of the new structure. The first deck pour occurred during fall of 2018 on the pre-stressed beams.

"During the winter of 2018-2019, the main span over the Mississippi River was installed with 10-foot deep tub girders. Installation of the tub girders was completed in spring of 2019. The remainder of the concrete deck and finishing work of the bridge was completed fall of 2019. It was opened to traffic shortly after."

The project called for the replacement of the Eisenhower Bridge and reconstruction of adjacent streets. The new structure was built during the 2018-2019 construction season, with demolition of the old Eisenhower bridge starting in late 2019.

"The biggest challenge we faced was flooding conditions on the Mississippi River," said Greco. "I really enjoyed the challenge of a project like this, and putting all the pieces together. It has been very rewarding. The Zenith Tech crews and partners worked well together. The knowledge and talent of the people I get to work with on a daily basis makes coming to work great." 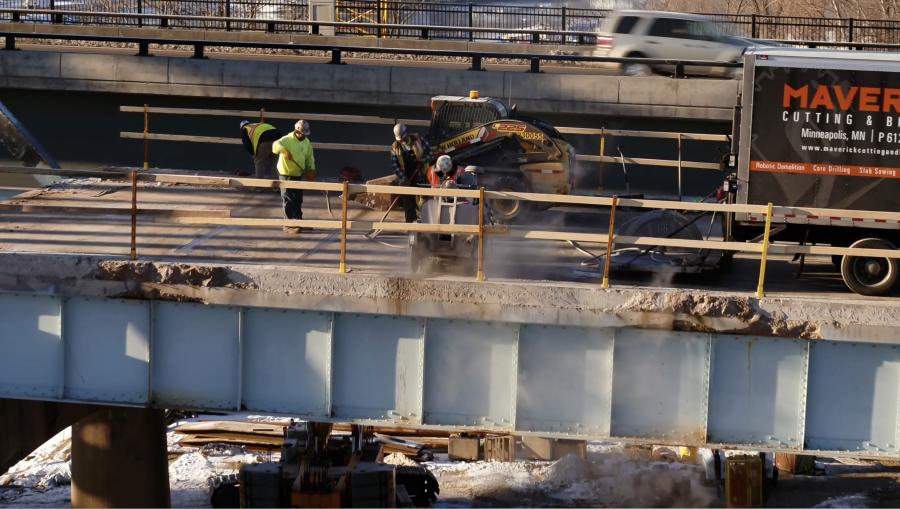 Removing the old bridge's spans was no small task, according to Michael Dougherty, director of public engagement and communications of MnDOT, District 6, Rochester.

"The center span involved the use of four industrial jacks that lowered the span onto two barges. The center span weighed more than 800,000 pounds, was 288 feet long and 39.5 feet tall. It was removed in about four hours after crews used cutting torches to remove it from the structure and then lower it. It was moved to shore and was cut up for scrap metal. From there, workers used cranes to lower each of the other spans over the next two months and wrapped up the span removal in April.

Crews will be removing the concrete piers in the months ahead. They also will be working on the roads that connect or allow motorists to exit or join Hwy 63 on the Wisconsin side. They are removing a temporary bridge and paving on Hwy 61, which crosses underneath Hwy 63 at Red Wing.

Dougherty noted that a great deal of planning was required before crews started assembling equipment to carry out the center span truss work.

"Getting to that point took many hours and months of discussions and analysis. The contractor hired a consultant to design the plan and procedure for the lowering of the span. The plan was then reviewed by the project team, including the MnDOT Bridge Office and the consultant, Parsons." 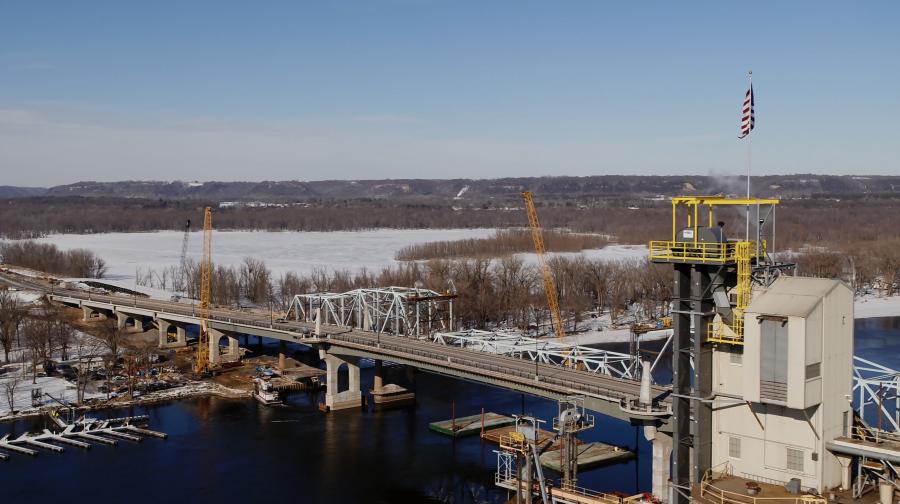 Platforms were installed on the truss, and workers installed special industrial jacks to help lower the span onto a barge in the Mississippi River.

"The span was lowered by a series of four hydraulic industrial jacks atop the bridge that inched the steel downward approximately 15 feet per hour," said Dougherty. "Demolition crews cut the steel joints in three corners, leaving the final cut until everything was given the A-OK to begin. The cables in the jacks were tensioned to hold the span in place for the final cut, which occurred shortly before noon."

As part of the process, parts are lowered via cranes, either to barges or onto land to be cut up and carted away. Regarding the piers, crews plan to cut the concrete off in pieces, eventually getting the piers down to a level where equipment will chisel away at the remainders while on barges.

"The pieces are expected to fall onto barges, but they will also scan to ensure that no elements end up on the river bottom," said Dougherty.

Electrical work continues on the new bridge, primarily in the tub girders, so that light will be available to inspectors and others who need to access the inside of the new structure. The ornamental railing will be installed on the bridge, as well as the electrical system for the aesthetic lighting. 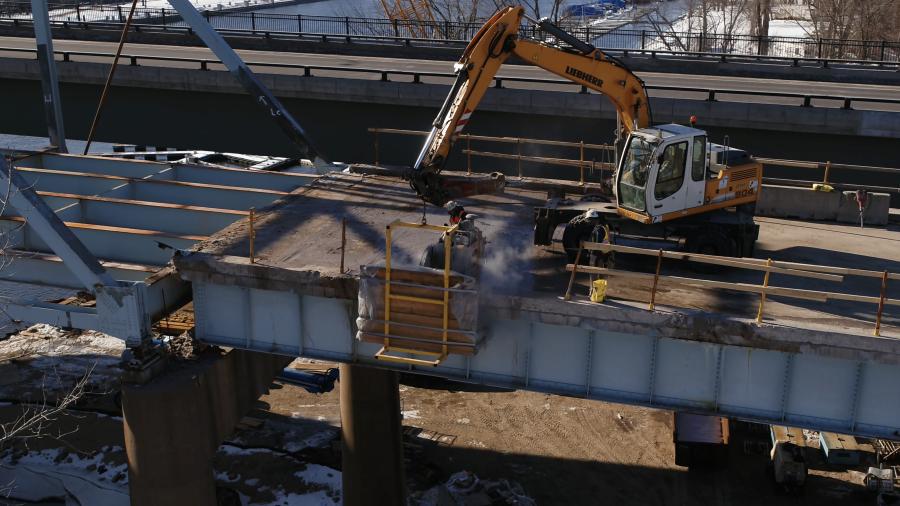 "This project is funded by Chapter 152 funding that was provided by the legislature to replace the fracture critical bridges in the state of Minnesota. We are partnering with the state of Wisconsin on the costs of this project."

As for the impact on motorists, Hwy 61 is reduced to a single lane of traffic in each direction through summer 2020. Traffic on 825th Street is detoured through 2020, with drivers using 825th Street north of The Woodshed to access Harbor Bar, Island Campground and marinas.

Completed in 1960, the old Eisenhower Bridge is a steel through-truss bridge that crosses the Mississippi River main channel at Red Wing, Minn. According to MnDOT's website, the two-lane bridge is 1,631 ft. long, 35 ft. wide and stands 65 ft. above the river. The bridge has provided the only regional crossing of the river for approximately 30 miles upstream and downstream for several communities on both the Wisconsin and Minnesota sides of the river. It was not eligible for listing on the National Register of Historic Places.

Work on the project began in late spring 2017, and should be completed in August 2020. Final seeding and turf establishment will take place this summer, followed by a landscape plan. WisDOT, the FHWA and the city of Red Wing also have played significant roles during the ongoing construction. CEG