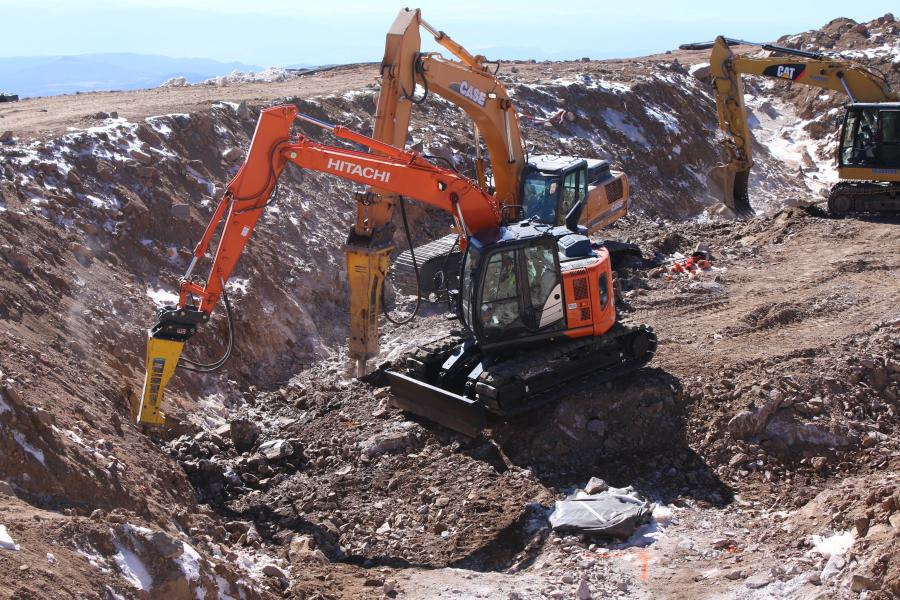 Excavation to the bottom of the building’s footprint is complete. This included the removal of nearly 10,000 cu. yds. of excavated rock, enough to fill more than three Olympic swimming pools.

Crews began mobilizing in early May for the 2019 construction season on the new $60 million Pikes Peak Summit House, arguably the highest elevation project in the country. It's also likely one of the more daunting as work takes place at 14,000 ft.

"We're trying to get up and running but the last few days the weather has not been cooperative as we've been getting rain and snow," said Jack Glavan, manager of Pikes Peak — America's Mountain. "The goal this year is to complete the footings and the excavation by the end of May so by June we can start the precast."

The challenges begin with the weather and continue with nearly every aspect of the project.

The Pikes Peak Highway is about 20 miles of hairpin curves and switchbacks. Heavy equipment, including large excavators, track hoes and rock crushers, can be driven halfway up on low-boys.

"They off load halfway up and then do what we call walk it up — drive it — the rest of the way," Glavan said. "It takes two to three days for some of the equipment to get up there. Some of the challenges with the big excavator taking it up the last 10 to 12 miles are we have to watch as the weather up here is still almost winter like. We have to make sure there is no ice on the road. Steel tracks could create a problem, sliding and all. With the altitude, we have to make sure they don't overheat or ruin the transmission."

Some of the equipment on site includes Cat 349 and 329 excavators; Cat 850 wheel loaders; and a Cat 740 articulated truck. 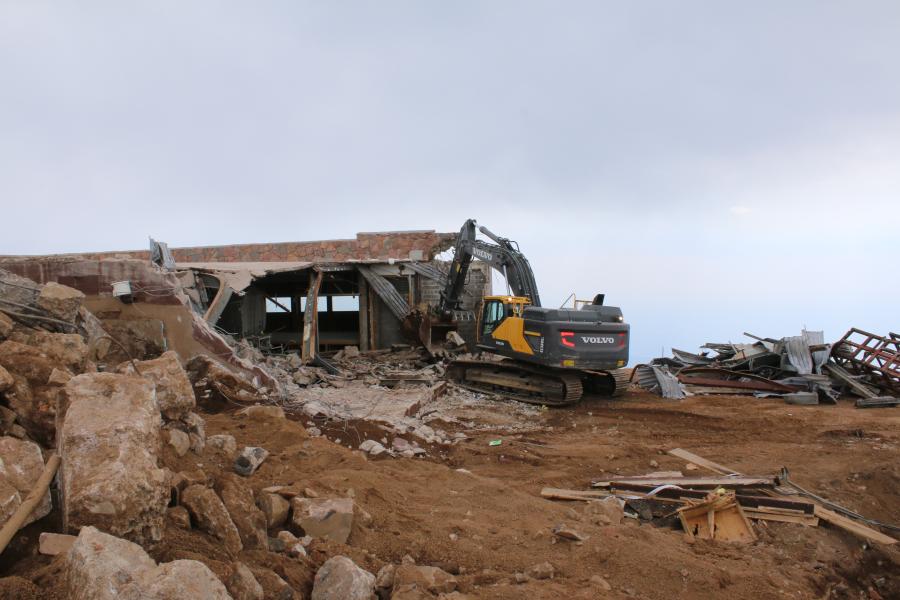 Contractor GE Johnson of Colorado Springs shuttles crews to the top. But to get hired on the job, individuals must first pass a detailed physical to ensure they can handle work at the high altitude. They will start with 6-hour days, and then once acclimated, move to 8-hour days. Work breaks are strictly adhered to and crews are encouraged to get plenty of water. In addition, an EMT is on site during the work day so that if there is a problem it can be addressed quickly.

The building is a National Historic Landmark and owned by the federal government, but operated by the city of Colorado Springs under regulations by the National Park Service and State Historic Preservation Office and under permit by the U.S. Forest Service.

The 38,000-sq.-ft. building will be constructed of 440 pieces of prefabricated concrete — sized for transportation access up the highway.

"We'll be erecting it this year on a very ambitious schedule," Glavan said. "We're looking to install eight to 10 pieces a day with a goal of having the building dried in by the end of October. That will allow us to work through the winter."

The Summit House also will feature large expanses of glass and some steel, particularly in the vestibule, but, because of the challenge of getting materials to the top, visitors won't see the large columns and beams usually associated with similar structures at lower elevations. 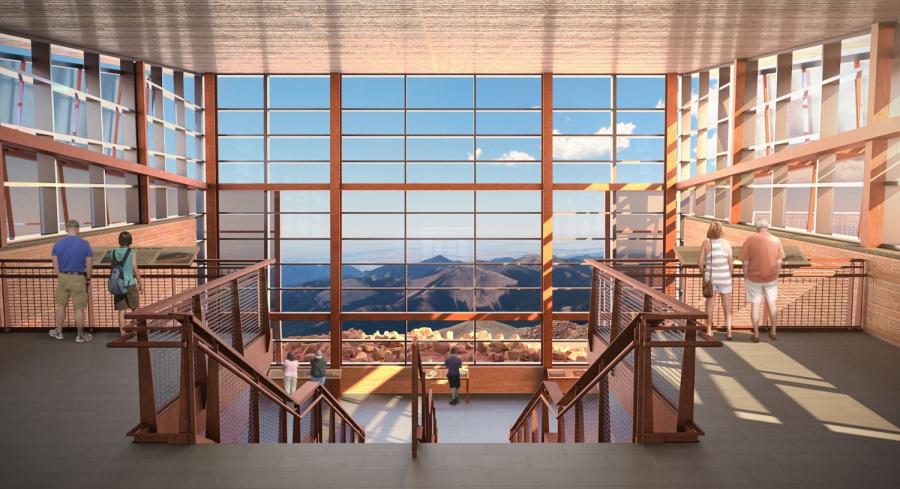 "The glass is what makes this building kind of dynamic," Glavan said. "As you enter, the vestibule is a big expanse of glass. That's for the dynamic view. On some of the directions, we'll have shutters to protect the glass. But on the main part, the Southeast view, we couldn't find a shutter system that wouldn't obstruct the view. So, we're having to test it to make sure it will meet the code. The criteria is testing for flying objects in a 270-mi. per hour gust. They'll shoot a 2-by-4 into the glass to make sure it won't fail with flying objects. This technology was developed after Hurricane Andrew where a lot of damage was from the flying objects rather than flooding or wind."

"Because the building is a federal building, it must meet LEED Silver standards, but plans call for going beyond those standards, aiming to meet Living Building Challenge (LBC) criteria, which emphasizes sustainability.

"One of the big challenges is that certain materials are on what they call the red list," Glavan said. "PVC is an example. That's why we are looking at installing our own wastewater treatment plant. The state just passed a regulation that allows you to use reclaimed water in toilets and urinals. So, we'll take some of our water, treat it and reuse it for toilets and urinals. 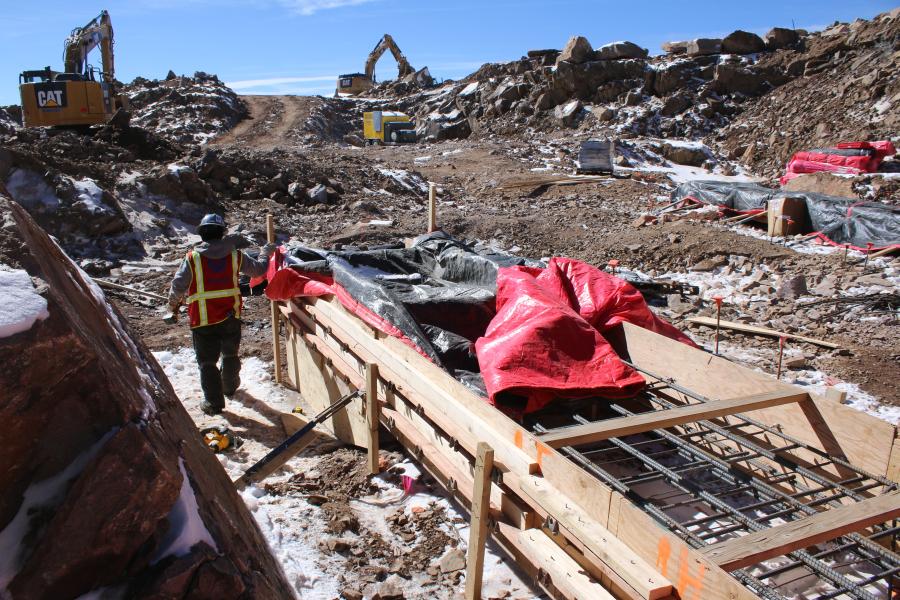 "I think we'll be the highest elevation project to achieve LBC, if we can achieve it. The interesting thing with LBC, you have to verify your design and submit after the building is operational."

The Summit House is scheduled to open in the fall of 2020 with demolition of the existing visitor center and restoration of that site to be complete in late 2021. Meanwhile, work also is taking place on the Pike Place Cog Railway and a nearby Army high-altitude research laboratory.

"One of the other challenges is we are trying to do this while keeping the existing Summit House in operation," Glavan said. "It's situated North of the new building and there will be limited parking so we are running a shuttle every five minutes for visitors. This will be a crazy summer."

• Excavation to the bottom of the building's footprint is complete. This included the removal of nearly 10,000 cu. yds. of excavated rock, enough to fill more than three Olympic swimming pools.

• The first phase of foundation footers, including 43 cu. yds. of concrete, has been placed in preparation for precast concrete to be laid in June 2019.

• All micropiles, a deep foundational element, for the central walkway have been placed ahead of schedule.

• A temporary central processing plant was successfully installed to handle all sewage and water needs of the existing summit house, which will remain open to visitors until opening day of the new Summit Complex. The existing plant was demolished due to construction.