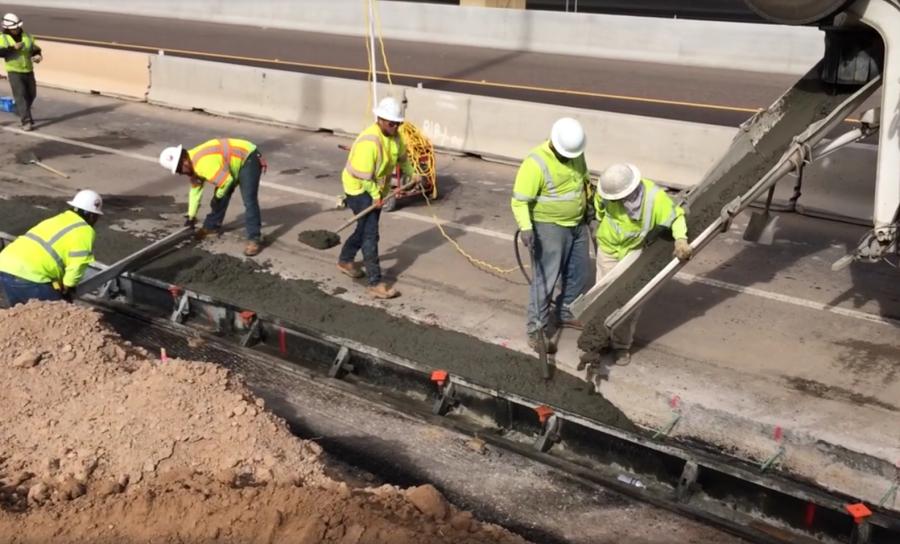 Construction scheduled to start early this year on the Loop 202 South Mountain Freeway may not be as visual as the 22 mi. (35.4 km) of uninterrupted asphalt to come, but each task lays a foundation for completing this link between the West Valley and East Valley by the end of 2019.

Along the freeway corridor in the first half of 2017, crews will be setting foundations for some of the 40 bridges that will be built, including two 2,700-ft. (823 m)-long spans across the Salt River; widening eastbound lanes of Pecos Road to maintain two-way traffic flow during construction; and creating access roads at the freeway's future interchange with Interstate 10 in west Phoenix.

Other construction scheduled for early 2017 by Connect202 Partners, the developer responsible for designing and building the $1.77 billion freeway, includes creating drainage structures and roadway embankments; relocating utilities; and continuing to extend HOV lanes west from the Loop 202 Santan Freeway.

As mainline work starts on the Arizona Department of Transportation's largest-ever highway project, detailed information on these and other construction plans, as well as traffic impacts, is available at SouthMountainFreeway.com.

• I-10 Papago, between the I-10 Papago Freeway interchange at 59th Avenue and Lower Buckeye Road

In the first half of 2017, construction will occur in all but the Center segment, where work isn't scheduled to begin until mid-2018.

Preliminary construction began in September with improvements to the I-10/Loop 202 Santan Freeway interchange, including extending Loop 202 HOV lanes and widening the Pecos Road shoulders to near 48th Street. On the west side of the project, utility work has included relocating large Salt River Project siphons carrying water under I-10.

The 22-mi. freeway, expected to open late 2019, will provide a long-planned direct link between the East Valley and West Valley and a much-needed alternative to Interstate 10 through downtown Phoenix.