The massive main spillway effort is part of a $500 million project to stabilize the main and emergency spillways. 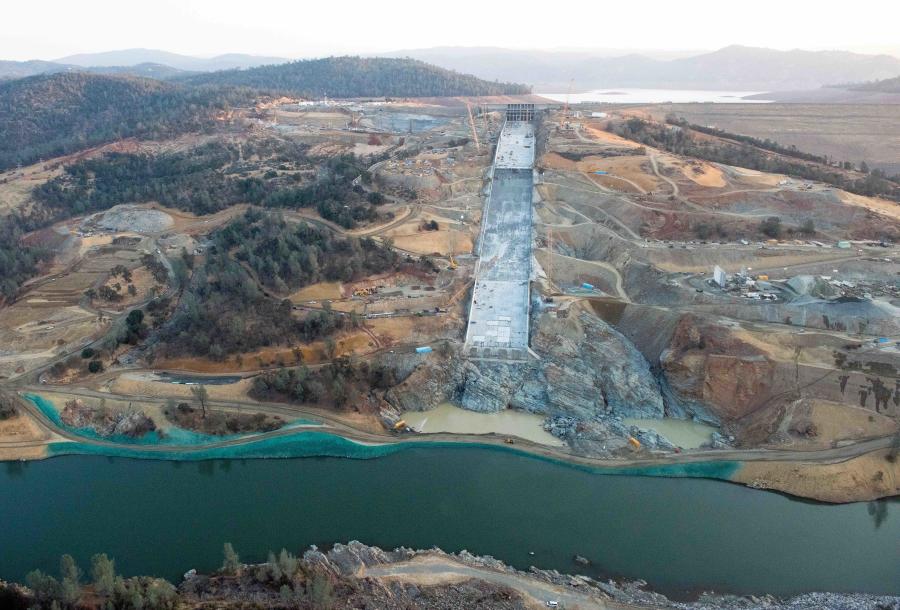 Crews met the Nov. 1 deadline for the massive repair of the Oroville Dam’s main spillway. This is part of a $500 million project to stabilize the main and emergency spillways, so the main dam won’t be threatened as it was during a string of drenching storms last winter. (California Department of Water Resources photo)

Crews worked at a swift pace to replace most of Oroville Dam's main spillway with a new spillway designed to handle water well during flood years. Lake Oroville is about 75 mi. north of Sacramento and about 25 mi. southeast of Chico. The dam is the tallest in the United States.

The massive main spillway effort is part of a $500 million project to stabilize the main and emergency spillways, so the main dam won't be threatened as it was during a string of drenching storms last winter. The main spillway work was on a tight schedule because oncoming winter weather was a factor.

“We met our goal of reconstructing and repairing the main spillway, so it could handle 100,000 cubic feet per second by November 1,” said Erin Mellon, communications and outreach advisor, California Department of Water Resources. “The date was a milestone, but it is not the finish line.”

An emergency spillway also is being repaired as part of the project. But it won't be replaced. A concrete buttress and splashpad will be constructed in front of the emergency spillway, along with an underground cut-off wall to prevent the kind of uphill erosion that occurred during last February's damage and flood threat.

Although hardest rains hit the area in winter months, wet Pacific storms are possible in mid-to-late fall. Consequently, an expedited construction schedule was necessary to ensure the spillway would be ready and working as the rain season approached.

Crews used controlled blasting and excavation to demolish the 2,270 ft. of main spillway and used vacuums and power washers to remove excess rocks and debris, which helped to better secure the concrete and bedrock.

The bulk of the main spillway was then rebuilt using structural and roller-compacted concrete. In 2018, the upper 730-ft. section that was patched and repaired will be demolished and rebuilt with structural concrete.

The two-year main and emergency spillway projects will require about 870,000 cu. yds. of roller-compacted concrete or enough to fill 26 Olympic-sized swimming pools, and 146,000 cu. yds. of structural concrete.

Subcontractors include Dutra Construction of San Rafael, Calif., which is completing debris removal in the diversion pool, and Barnard of Bozeman, Mont., which is finishing powerline work.

Kiewit had more than 600 workers on double shifts six days a week at the peak of the project from August through October. Some crews worked seven days a week.

During the first phase of the project ending Nov. 1, Kiewit had a variety of heavy equipment at the project site including stationary and mobile cranes, concrete hauling trucks, roller compactors, stationary drill rigs at the secant pile wall and cement production and pouring equipment.

The close call necessitated quick, but dependable repairs to the main spillway.

Construction crews have been working to rebuild the spillways on an accelerated timeline.

The $500 million figure to repair the main and emergency spillways is on top of emergency response efforts, which had a price tag of between $140 and $160 million. California Department of Water Resources is working with FEMA (Federal Emergency Management Agency) to cover as much as 75 percent of the costs for the emergency and recovery efforts.

State and local water districts will pick up the balance of the costs.

The university was contracted to build and test a 50:1 scale of the damaged main spillway for research and to test engineering designs. Also, an independent forensic team had the chore of determining how the spillway collapsed.

A team of hydrologists determined how the new main spillway would be built.

The forensic team has not yet issued its final report, but the report is expected to be released by the end of this year.

The plan will guide Department of Water Resources reservoir operations at Lake Oroville from winter through April 2018. To ensure public safety, the plan calls for the department to maintain lower-than-average lake levels during the winter months to provide space for inflows.

The plan also helps in the management of releases over the main spillway.

Specifically, the plan required the Department of Water Resources to lower the lake level to an elevation of 700 ft. by Nov. 1. The average elevation on that date is 780 ft.

The lower level will provide more than 2.2 million acre-ft. of flood reserve storage to accommodate inflows during the rainy season. In the event the reservoir rises quickly during the winter months, the operations plan identifies certain elevations at which the Department of Water Resources will increase outflows through the Hyatt Power Plant, the river valve outlet or the main spillway to maintain safe lake levels.

Contractors had a huge area of concrete to deal with. The width of the spillway is about the same as a 16-lane highway.

Construction materials are in heavy use. In addition to massive amounts of concrete, crews at both spillways will have installed 8.5 million lbs. of steel rebar (to stabilize the concrete) and 55,000 ft. of drainage pipe when the project is finished.

Once most of the main spillway was demolished, crews cleaned and smoothed the bedrock surface underlying the spillway. The effort is vital in making sure the concrete can bond to the bedrock.

The Los Angeles Times reported in September that clues that the main spillway at Oroville Dam could fail were embedded in state records. The clues were not recognized in time to prevent the collapse of part of the spillway in February 2017.

The Times story added: “A history of damage when the spillway was used, cracking the concrete surface and unexpectedly large amounts of water exiting drains under the deck should have raised suspicions that something was wrong. But annual inspections gave the state false confidence that the spillway could handle a big flood event, investigators found.”

DWR Looks Ahead on Safety

The department must determine to protect Oroville Dam's spillways to prevent future water damage and threat of catastrophic flooding.

The department and downstream residents had quite a scare in early February after the area was hit hard by a series of drenching winter storms. As Oroville Lake filled to near capacity, water was released over the dam's concrete main spillway. In doing so, a large hole developed in the spillway ramp.

Then erosion at the base of a nearby emergency (auxiliary) spillway threatened the stability of the spillway wall which holds back billions of gallons of water. That led to an evacuation order for residents in the path of the dam.

The main spillway was put back to use after a brief examination and water levels in Lake Oroville were brought down to safer levels, but damage was fairly extensive to both spillways.

Using helicopters and bulldozers, crews worked to fill in eroded areas near the emergency spillway wall. By Feb. 23, they had brought in 100,000 cu. yds. of rock and sand and 11,600 cu. yds. of cement, which was poured over the rocks and sand.

The main spillway needed further examination to determine if the hole could be repaired or if a new spillway would need to be constructed. Meanwhile work continued on filling holes and stabilizing the area near the emergency spillway.

On Jan. 31, flows through the dam's concrete main spillway at Oroville Dam reached 10,000 cu. ft. per second increasing water flow into the Feather River.The flow over the spillway was increased to 54,500 cu. ft. per second on Feb. 7 to offset higher inflows from rainfall. On the same day, part of the main spillway unexpectedly collapsed into the ground as water was being released from the lake. Crews temporarily closed off the flow, so damage could be examined. With water levels continuing to rise, engineers decided to use the damaged main spillway, but with reduced flows.On Feb. 11, with the elevation of Lake Oroville at 901 ft., water levels topped the emergency or backup spillway, which is a concrete wall designed as a last-ditch resort to drain the lake when it becomes too full. As water poured over the wall and pounded the ground below, DWR officials worried that erosion could undermine the barrier. That could cause the concrete wall to collapse, causing a 30-ft. wall of water to rush into the Feather River. It was the first time that water flowed over the emergency spillway since the dam was completed in 1968.