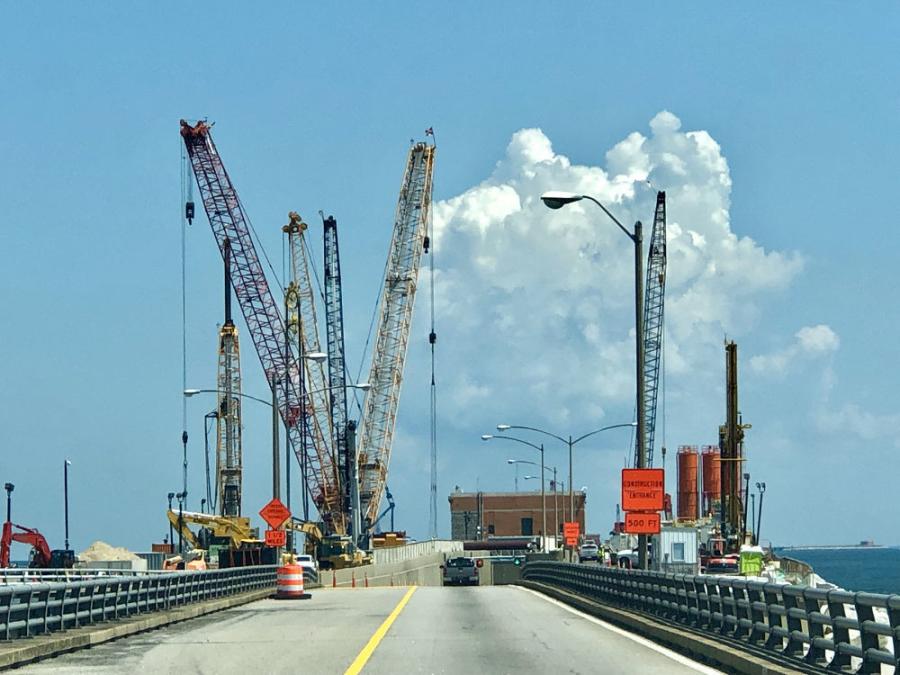 At a cost of $756 million, a new two-lane tunnel will be built under Thimble Shoal Channel. (CBBT photo)

Although boring won't begin until early next year, construction crews in Cape Charles, Va., are making significant progress on the Parallel Thimble Shoal Tunnel (PTST) project. At a cost of $756 million, a new two-lane tunnel will be built under Thimble Shoal Channel.

"This tunnel project will be Phase II of the Parallel Crossing project, providing dual lanes at Thimble Shoal Channel," said Mike Crist, deputy executive director of infrastructure for the Chesapeake Bay Bridge and Tunnel (CBBT) District. "Phase III will be a parallel tunnel at Chesapeake Channel, and will complete the parallel crossing." 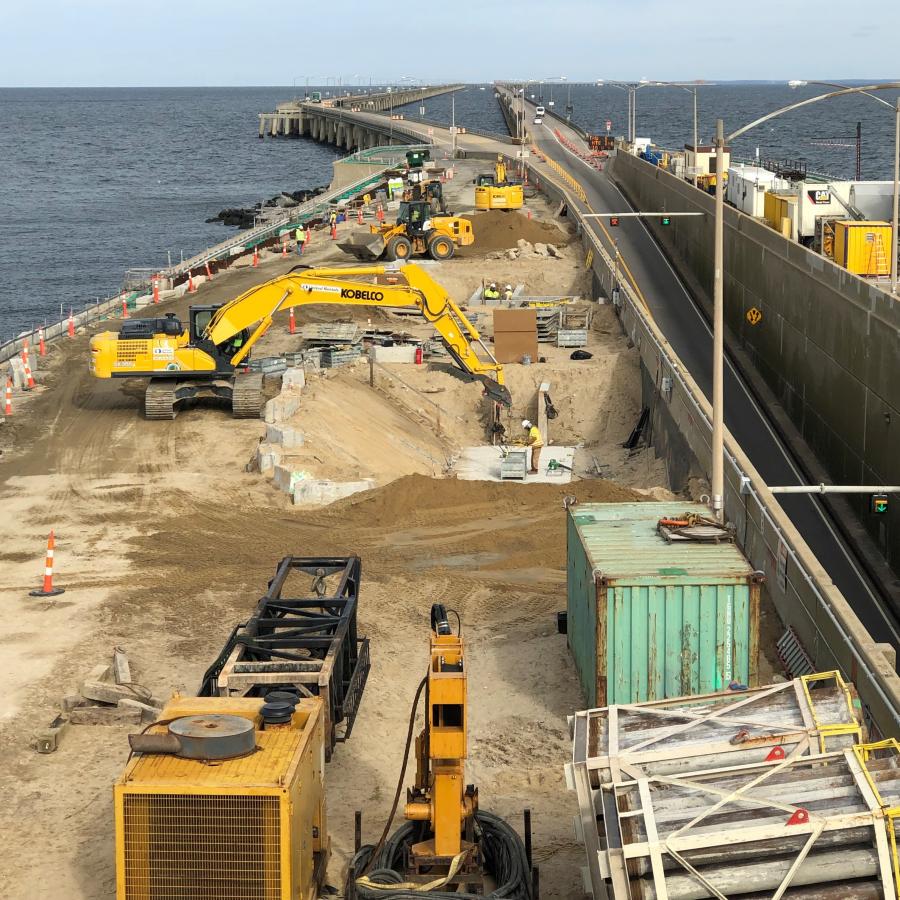 The Chesapeake Bay Bridge-Tunnel is a 17.6-mi. bridge and tunnel complex that spans the lower Chesapeake Bay and connects Virginia's Eastern Shore with the mainland in Virginia Beach. The Parallel Thimble Shoal Tunnel project involves the construction of a two-lane bored tunnel from the CBBT's southernmost island (One Island) under Thimble Shoal Channel to Two Island.

Crist said the Route 13 corridor is considered of statewide significance, with no viable alternate route. Per year, on average, the CBBT experiences 25 lane closures in the tunnels due to accidents/incidents; 450 for oversized escort loads; and 950 one-way lane closures for maintenance and contractor work.

Unlike many construction efforts, work is moving along faster than originally planned.

"This project was originally scheduled to begin in the 2020-2025 timeframe," said Crist. "However, in August 2013, the CBBT Commission approved this project to begin at an earlier date, in order to take advantage of low interest rates and a good bidding environment."

The design-build team is a joint venture between Dragados USA and Schiavone Construction Company LLC. Crist said a great deal of scheduling was required to bring the project to fruition.

"The plans for a parallel crossing began in the 1990s. Phase I included the construction of parallel bridges and trestles; however, all traffic funneled into single lanes in the tunnels. Phase II is now under way at Thimble Shoal Channel and Phase III will include Chesapeake Channel Tunnel, providing dual lanes in each travel direction." 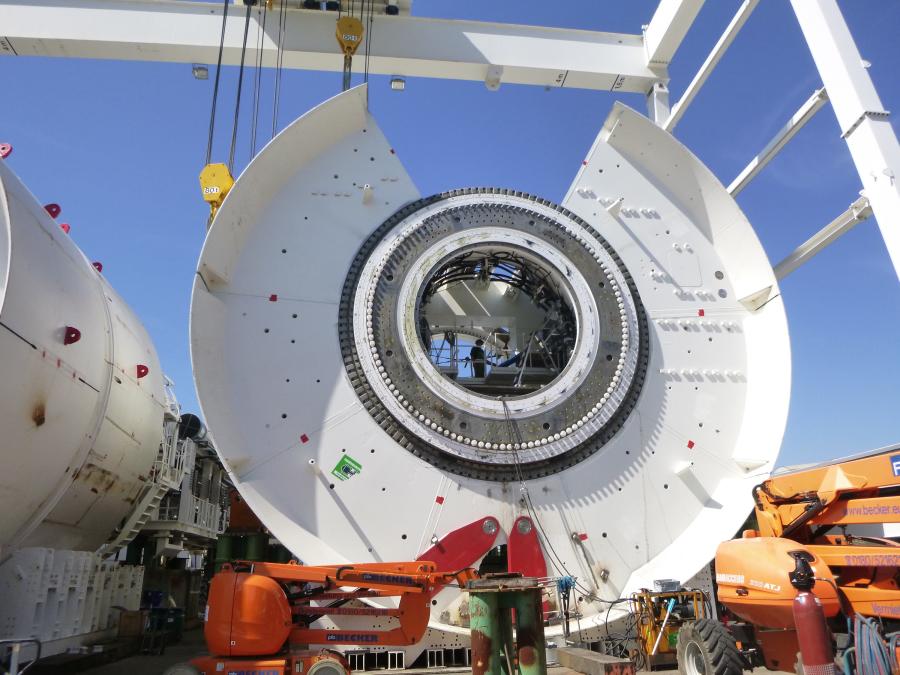 Cost was the major advantage in using a Tunnel Boring Machine (TBM), which has been dubbed "Chessie".

"The CBBT allowed design-build contractors to propose either an immersed tube tunnel or a bored tunnel. The award was made to the lowest cost, technically compliant proposer. All three proposals were based on a bored tunnel approach. Based on the proposals, the bored tunnel approach was the most cost-effective for our particular project needs. Secondary benefits of the approach include minimizing dredging impacts and minimizing impacts to the shipping channel."

With a total weight of more than 6 million lbs., Chessie is 308 ft. in length, with a cutterhead size of 43.5 ft. in diameter. It features hundreds of cutting tools used to remove the soil from the tunnel face. Its power is 10 megawatts, the equivalent of energy to power 2,500 homes; however, its speed is slow, with a maximum advance rate of 2.4 in. per minute. Chessie will advance approximately 50 to 60 ft. per day, taking roughly one year to complete the tunnel bore. Chessie will remove approximately 500,000 cu. yds. of soil, which will be disposed of at a DEQ-approved landfill.

"Chessie remains in Germany at this time," said Crist. "CTJV will make plans to ship her to the U.S. as the island prep-work nears its completion, which is anticipated to be in 2020."

Crist noted that the impact of the work already under way and the construction yet to come can't be overstated.

"The Hampton Roads region has nine tunnels, all of which are immersed tube tunnels. This bored tunnel will be the first bored transportation tunnel in the region." 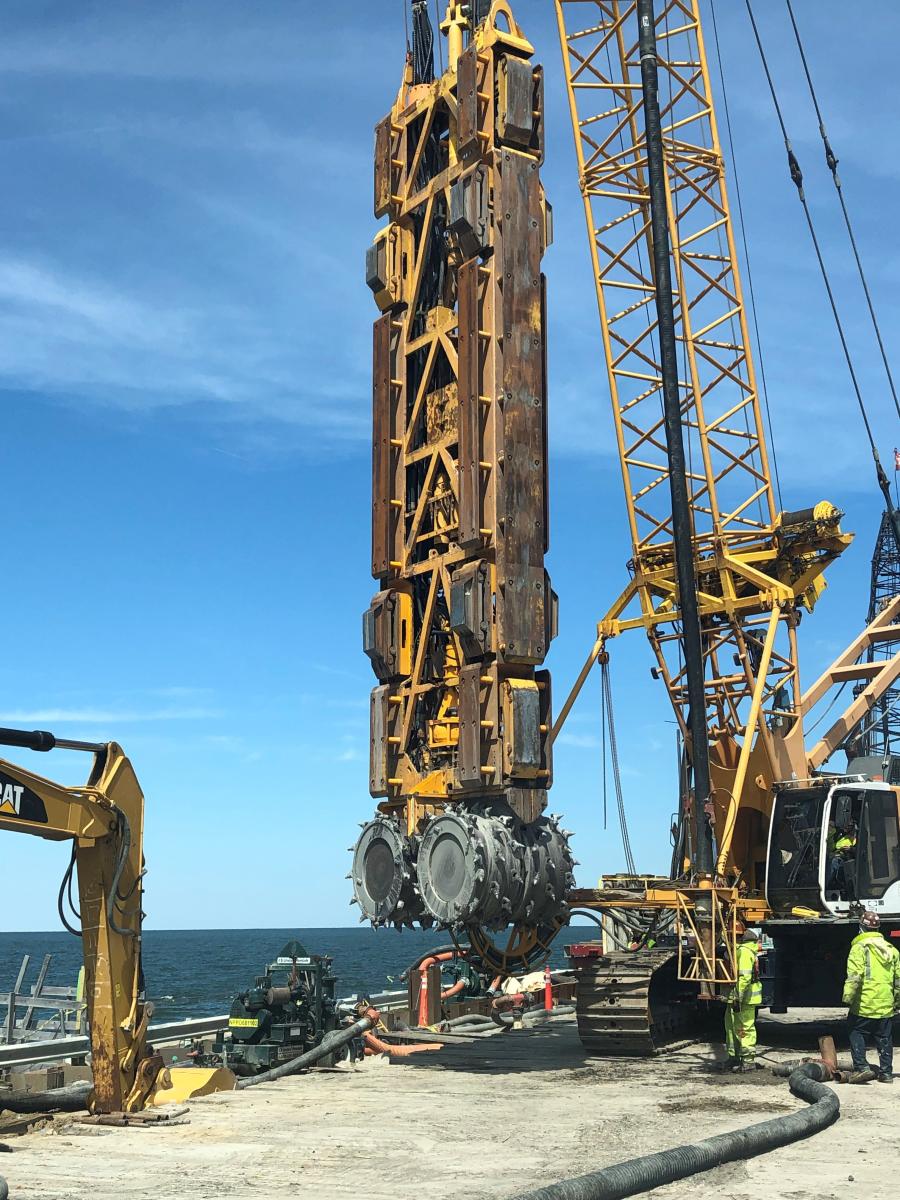 The PTST Project will be funded through the sale of revenue bonds, a Transportation Infrastructure Finance and Innovation Act (TIFIA) loan, a VTIB loan and monies from the district's general fund. As for the biggest challenges on this project, space is a major concern, along with environmental conditions.

"The contractor is working on an extremely tight site," said Crist. "This project is essentially located in the middle of the ocean. The contractor has already experienced winds in excess of 100 mph, that have resulted from thunderstorms, not hurricanes."

There are approximately 10 cranes on site at this time, along with other equipment.

"Currently, a hydromill is being used to dig through the islands' surface to create the deep excavation, which will then hold the slurry panels," said Crist. "A Berminghammer is being used to drill and install casings through the armor stone. However, the tunnel boring machine will be the main piece of equipment used to bore/construct the tunnel.

For the engineered berms, stone deliveries are ongoing. Rock is being barged to the site and placed by crane. In addition, work on the electrical duct bank in the South Toll Plaza is complete. Utility relocation is under way on the islands. Work also is under way on the placement of slurry panels.

Rebar cages vary in length, and placement is under way. The contractor is installing, on average, three cages per week. The launching pit and receiving pit will each require approximately 90 cages. 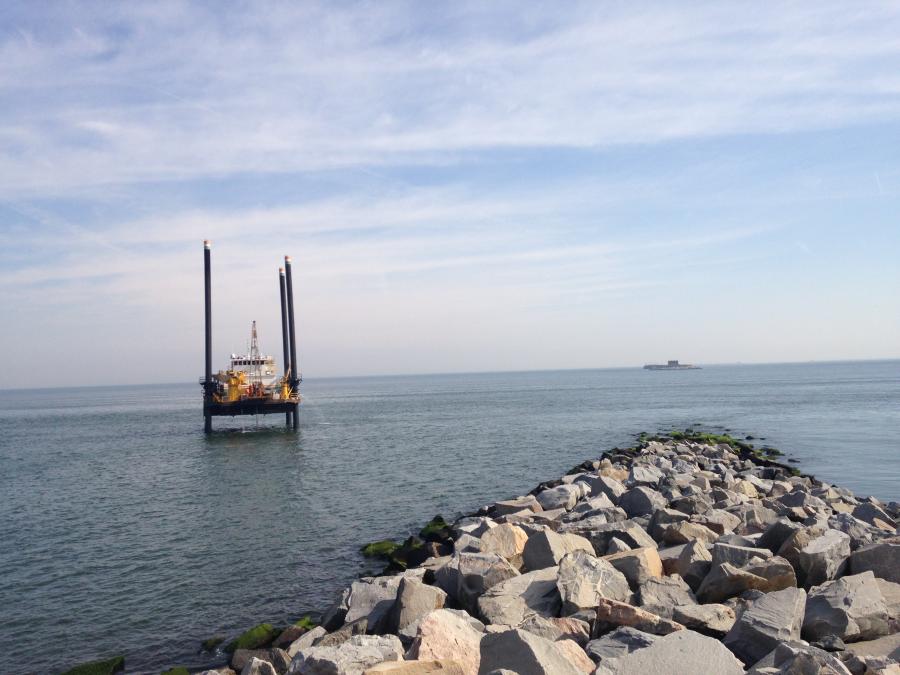 According to the CBBT website, CBBT continues to work with CTJV to complete the project design. All critical path design work is complete. The remaining open packages involve the new ventilation buildings, fishing pier, the replacement of three trestles at both islands, internal tunnel work and the island surfaces.

On One Island, pile driving continues for the temporary dock being constructed off the western side, and the first steel beams and timber mats have been installed on the structure. As work progresses on the temporary dock, equipment will be shifted from the island and the cranes will move onto the dock structure to continue its build-out. This dock will be removed once Chessie has completed passage from One to Two Island.

Soon, construction of an additional temporary structure, the Omega trestle, will begin. This structure will jut out into the water from the north side of One Island. CTJV is currently installing a temporary concrete foundation in the northwest corner.

Marine work has begun on the engineered berm off the north end of One Island. The berm is being expanded to provide sufficient cover and weight to allow Chessie to mine through and ensure the new tunnel is secure. The initial rock has been installed on the scour apron and work has started to remove poor material at the base of the slope on the western side of One Island. The excavation will be replaced with sound fill. 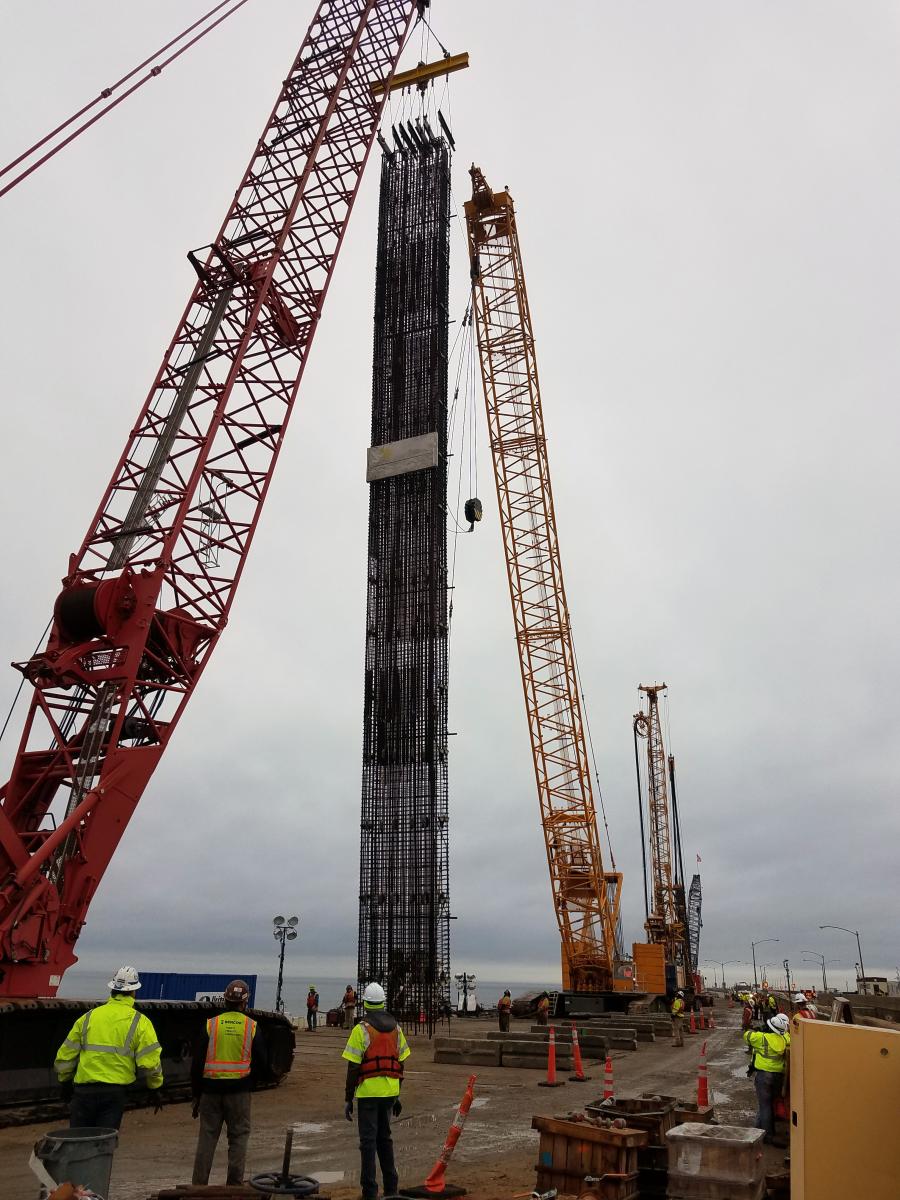 Work on the foundation of the temporary water treatment facility has begun on the east side of the island. This plant will "clean" the process water used to support Chessie. Utility relocations are under way on the island, along with the mobilization of a second set of equipment for the slurry wall construction.

Slurry panel construction on Two Island began in February and continues. CTJV also is overseeing temporary foundation work that will support the future jet grouting operation on Two Island. The process improves the strength of soils so that they can support the weight of the new tunnel and roadway.

Initial work on the project began in 2017, with an expected completion date of 2023. The tunnel will consist of approximately 9,000 individual concrete pieces. Approximately 42,000 cu. yds. of concrete will be needed to make the tunnel sections.

More than 300 species of fish and shellfish live within the Bay, which also provides habitat for seals, right whales and other marine mammals. CTJV has worked to minimize the environmental impact of the Parallel Thimble Shoal Tunnel project from the original proposed plan, significantly reducing the acreage of in‐water impact and the volume of dredged material.

During the design‐build process, the CTJV determined that a tunnel bored under the bay bottom was a realistic alternative. A tunnel bored underneath the bay bottom would significantly reduce the environmental impact of the project. Dredging would be reduced from 1.8 million cu. yds. to 77,000 cu. yds. The need for ocean disposal at the Norfolk Ocean Disposal Site would be minimized. Material bored from beneath the Chesapeake Bay doesn't need to be raised through the water column, meaning less turbidity and potential for impact to marine life.

In addition, bored material will be disposed at approved upland disposal areas, and disruption to the federal navigation channel would be avoided. There would be no need to expand the portal islands.

CTJV consulted with environmental scientists and engineers, as well as key environmental resource and regulatory agencies, to evaluate whether the project would cause a permanent loss of habitat value. Analyses indicated the area would support the same or greater amount of aquatic life after the project as before. This resulted from changing some of the project area from open water with flat sand bottom to open water with a three-dimensional rock substrate that provides additional habitat for some types of aquatic life.

CTJV also is committed to disposing of water in the most environmentally appropriate way, and within regulated water quality limits to protect the environment of the Bay. It is managing the containment, transportation and disposal of dirt and other solid construction materials in compliance with all regulatory requirements. CEG