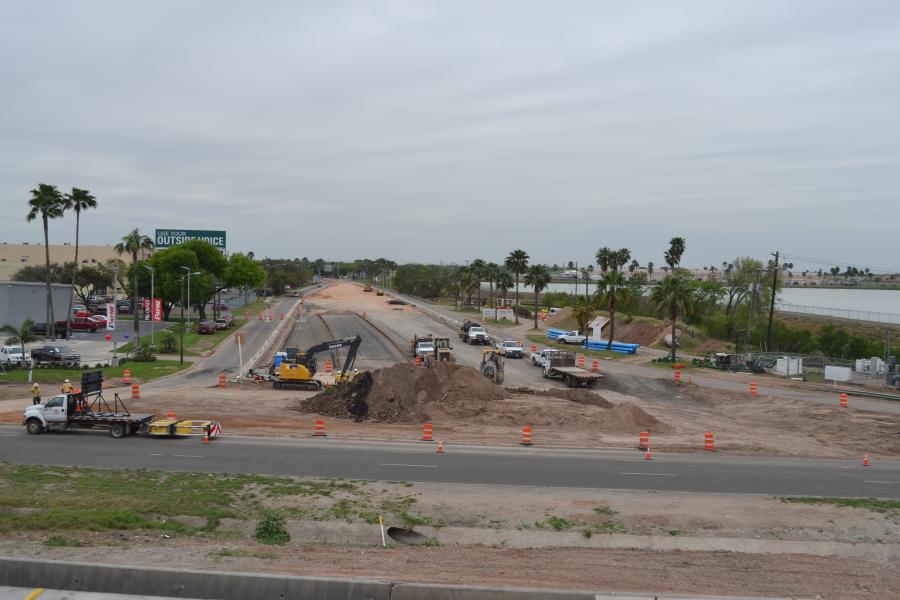 This project is replacing the six-lane I-2 underpass at Bicentennial Boulevard.

The Texas Department of Transportation's (TxDOT) $47 million I-2 and Bicentennial Boulevard project in the City of McAllen, which started on Jan. 2, 2017, is expected to be delivered by crews from Anderson Columbia Co. Inc. in October.

The project is replacing the six-lane I-2 underpass at Bicentennial Boulevard with a 287 by 128-ft. long, six-lane overpass; raising the bridges (overpasses) on 23rd Street and 10th Street by 2 ft., 10 in. and installing new sidewalks and crosswalk signals; changing entrance and exit ramps along I-2; and resurfacing the I-2 mainlanes, frontage roads and ramps from FM 2220 (Ware Road) to 23rd Street, and from 10th Street to McColl Road. Other elements include utility, sidewalk and crosswalk signal improvements

"This project is to improve connectivity at I-2 and Bicentennial Boulevard by reconfiguring the at-grade interchange to a grade-separated standard diamond and improve existing grade-separated under crossings east and west to the new interchange," said Octavio Saenz, TxDOT's public information officer, Pharr District. "The proposed interchange-related modifications will accommodate all turning movements through the intersection. Interstate main lane traffic flow to and from the new intersection will be provided by new ramps and reversing existing ramps to improve mobility and safety."

The final design, prepared by Jeffrey E. Wesanen, of KBR Technical Services Inc., was submitted on Oct. 28, 2015. This section of I-2 carries in excess of 200,000 vehicles daily.

Cranes, dozers, excavators, loaders, rollers, pavers and other standard equipment can be found in the construction zone. 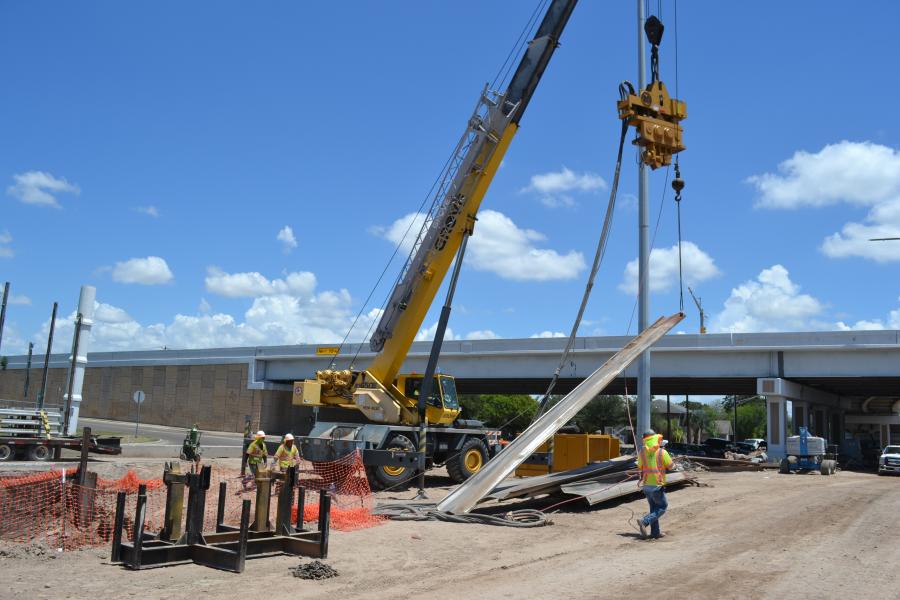 "Removal of the existing Bicentennial overpass' 426 by 75 feet continuous steel span, in seven evenings, and no more than one direction of traffic, frontage road or mainlane closed at a time, was a challenge," said Lorne Jonsson, Anderson Columbia's senior project manager. "That and the raising of the 195 by 71 ft. 50-year-old 10th and 23rd Street overpasses while maintaining traffic below. We ultimately closed them for a single nine-hour shift, which pleased everyone."

The traffic management plan is based on lane closures and detours as the work progresses.

"To ensure the contractor could bring in the correct materials into the project, samples of the material would be inspected or tested before they were brought in," said Saenz. "For the contractor to have enough space, the project was split-up in phases — westbound and eastbound main lanes."

Anderson Columbia has completed the full reconstruction of the I-2 mainlanes. The focus of the 2020 construction season is the completion of drainage elements and phased frontage road reconstruction.

"Night work was done to prevent hazards to the traveling public," said Saenz. "The interstate was shut down in one direction while the bridge overhead was demolished. The same process was repeated on the other direction. We hold weekly progress meetings with the contractor. The most important thing about resolving issues is communication. If I cannot get information to the contractor, the project can get delayed. The same goes for the contractor: if they cannot get me the right information, the issues do not get resolved and the project gets delayed."

Jonsson was fully aware of the challenges associated with the project, particularly the urban setting.

"There are local malls and smaller retailers to maintain access for, entrance and exit ramps to accommodate, and materials to get in and out of the construction area," he said. "Additionally, due to the phased nature of the project and extreme difference in roadway profile, the first phase was constructed with both permanent and temporary retaining walls, necessitating three different fills to install and balance as the grade was raised. The management of having these three different materials at the ready in a confined area represented the greatest challenge from the roadway aspect." 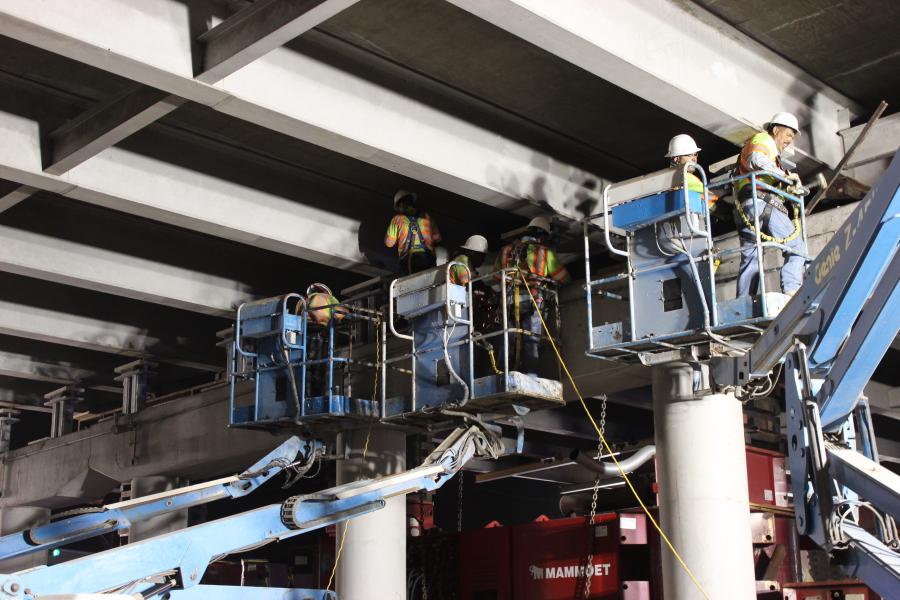 Work on the new overpass began in January 2017.

"Night work was done to prevent hazards to the traveling public," said Saenz. "The interstate was shut down in one direction while the bridge overhead was demolished. The same process was repeated on the other direction."

The demolition of the ramp was accomplished with a single frontage road lane closure.

"The mainlanes overpass was removed, first by the staged removal of the concrete deck by standard mechanical means with three nightly lane closures," said Jonsson. "The next stage was the removal of the steel girders. This was accomplished by two cranes supporting two girders at a time, cutting of the elements in full span segments and removal to the side of the travelled way. Each span was removed in a single shift, meeting the requirement for not more than seven days of traffic displacement."

The construction of the concrete overpass went according to schedule. Many prefabricated elements were used, including bridge pedestals, box culverts for drainage, inlets, manholes, panels for the retaining walls and concrete deck panels.

The raising of the bridges was a complex operation.

"The bridge raising presented many challenges, including maintaining the integrity of the 50-year old bridge slabs, which had been widened twice, and the maintenance of traffic," said Jonsson. "Preparatory work was done at the abutments to receive 100-ton jacks, and pedestals were preplaced prior to lifting. Mammoet was brought in to manage the lift with their two 2 by 300-ton mobile lifting frames. Each half of each bridge — eastbound and westbound, 195 by 71 feet — was lifted in a single nine-hour night shift, providing the minimum amount of traffic disruption. The method, verified by pre- and post-raising surveys, did not show any new stress cracking to the decks." 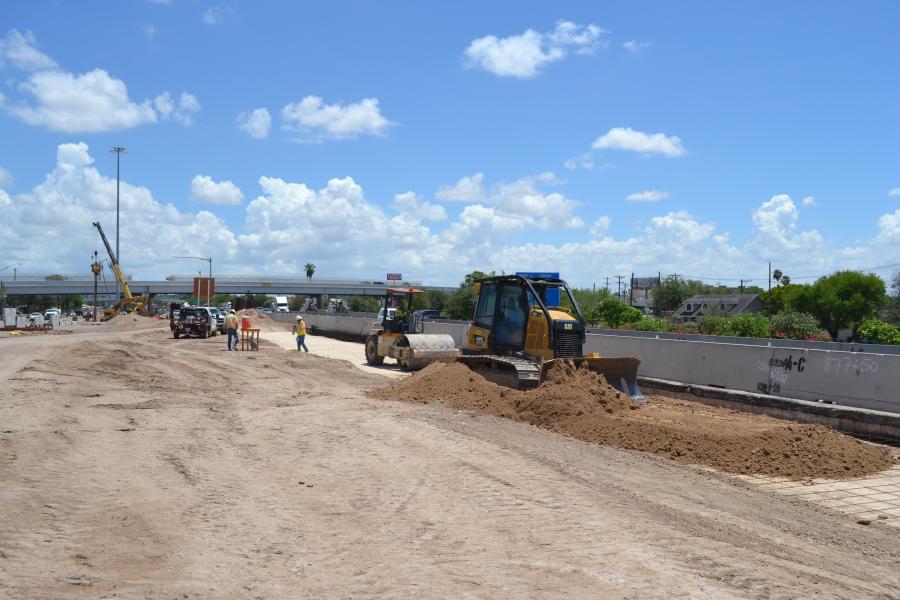 There are 75 plus Anderson Columbia and subcontractor employees on-site on peak days, with the major subcontractors being Foremost Paving for base and asphalt, Hunter Demolition for the existing overpass removal and Mammoet for the bridge raising.

The initiative provides safer accommodations for bikes and pedestrians.

The project, being done in coordination with the city, is being funded by the Federal Highway Administration (90 percent) and the State of Texas (10 percent). The work zone covers I-2 between FM 2220 (Ware Road) and McColl Road (1.364 mi.) and .604 mi. of Bicentennial Boulevard between Jackson Avenue and Uvalde Avenue. The east-west I-2, with three grass medians, passes through a low-density commercial area and Bicentennial Blvd., a north-south road, has low-density commercial and open spaces. CEG