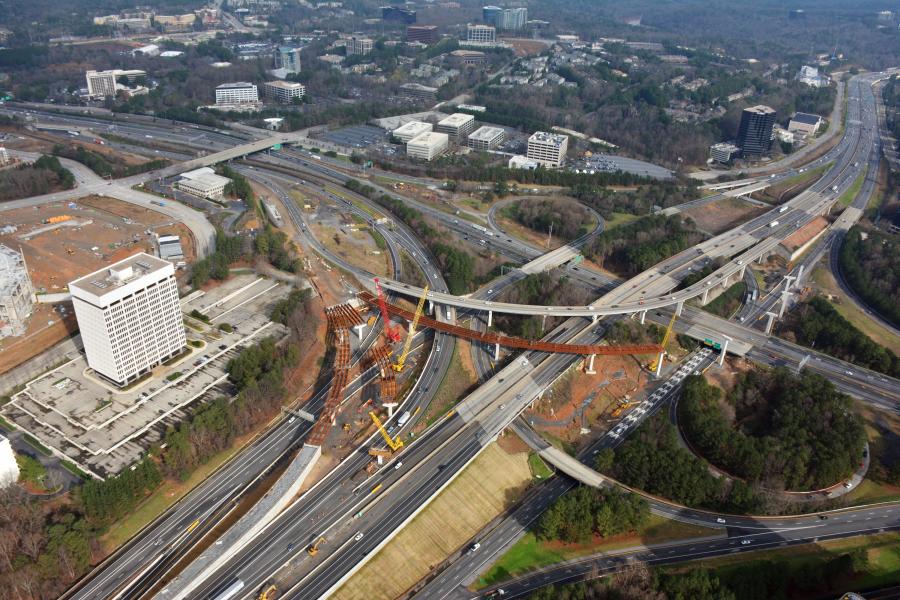 Construction crews recently reached another milestone in Georgia's Northwest Corridor Express Lanes project, completing the placement of five 155-ft. (47.2 m) concrete beams over Delk Road. The beams are part of a 2,311 ft. long (704 m) bridge that will span this section of the project.

Once completed, the Express Lanes bridge over Delk Road will include 68 beams, each weighing more than 110,000 lbs. (49,895 kg). The bridge, which is being constructed to carry vehicles traveling in the dedicated Express Lanes, is designed to reach a height of more than 23 ft. (7 m) to the top of the new bridge deck over Delk Road.

“The primary purpose of the Northwest Corridor Express Lanes is to provide an additional travel option for motorists,” said John Hancock, assistant state innovative delivery engineer of GDOT. “They will have the choice to use the Express Lanes when needed, but the general purpose lanes will always remain open for travel without a toll. In addition, individuals using transit and registered vanpools will be able to travel in the lanes without paying a toll. The NWC project is a critical piece of a strategic transportation plan to provide options for more reliable travel times with benefits to both transit and registered vanpool customers in one of the region's busiest thoroughfare.

“The Northwest Corridor Express Lanes will be a part of a larger Georgia Express Lanes system, geared toward improving connectivity and mobility in the region for commuters, transit riders and the logistics industry, bringing an economic benefit to the Atlanta area and the entire state.”

The project, which will add 29.7 mi. (47.8 km) of toll lanes in the I-75/I-575 corridor and from Akers Mill Road to Hickory Grove Road and along I-75/I-575 to Sixes Road, is the largest project the Georgia Department of Transportation has undertaken and the first P3 — Public Private Partnership — in the state. Archer Western Contractors and Hubbard Construction are the contractors on the project. Parsons Transportation Group is the design subcontractor.

“One of our biggest challenges is this being a P3, it's new for everyone,” Hancock said. “It's a lot of education we have to do for all the stakeholders involved. It's a design-build project and the contractor is responsible for 10 percent of the funding for the project. The contractor has to be totally committed to the project one year from substantial completion. This is a very large project. The funding sources we have coming in are not all available up front. The stop gap financing is to get us through and also to make them more of a stakeholder in the project, too.”

“One of the things we are trying to do is not disturb the existing intersection,” Hancock said. “This way we have the bridge going over it and it doesn't impact the ramps or the highway. When completed the express lanes will be separated by barriers and part of an overall system of express lanes around Atlanta. The lanes will be reversible, running northbound away from the city in the evening and southbound into the city in the morning.

“The project began in about 2001 and it was an HOV extension that grew at one time into $4 billion project,” Hancock said. “The project we have now we came up with in 2009, when we scaled back the budget. Right now, it's a $834 million project.

“One of the great things is we've got a good partnership with the joint venture. We're making fantastic progress. We have several different crews — bridge crews, wall crews, drainage and roadway crews. They've been working on the northern section of the project. We've gotten a few comments with bridge being thrown over Delk Road. It's an eye opener. People see that the project is here and they are seeing the effect. The bridge on Delk Road is actually going up in August/September We have to tie it in the roadway. The completion date for entire project is 2018 and we have a lot more to go.”