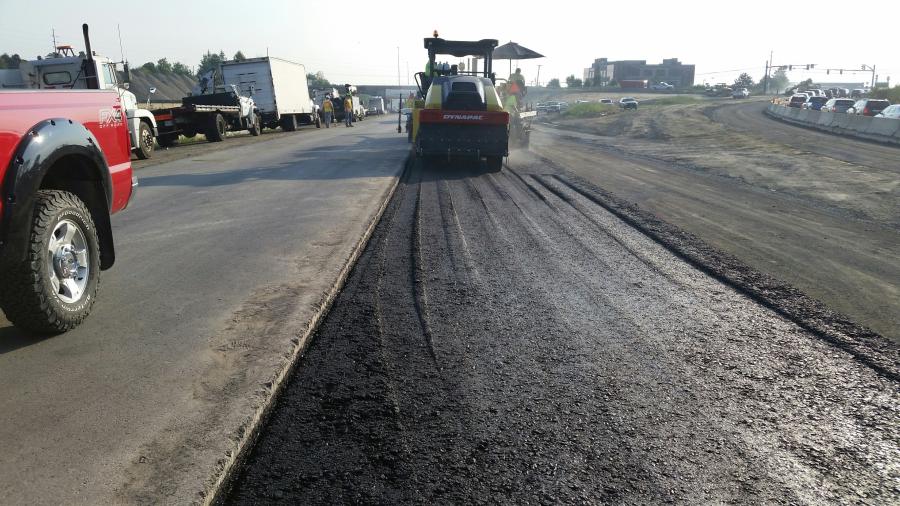 The $46.4 million construction project to repave I-271 in Summit County, Ohio, from Broadview Road to the Ohio Turnpike was standard enough. Take a 50-year-old, 4.3-mi. (6.9 km) stretch of highway, including eight bridges and one culvert, and replace the pavement.

“The biggest challenge is maintaining traffic flow on major interstates I-77 and I-271,” said Justin Chesnic, spokesman of the Ohio Department of Transportation.

The first contract was bid in 2013 and work is scheduled to be completed in July 2017.

But as it turns out, the job may not be quite so typical after all — due to some innovative ideas on the use of equipment, as well as a step toward solving a tricky problem of building a better asphalt joint.

Construction crews are keeping traffic moving by using contraflow. “Basically, you are shifting lanes to the side,” said Sava Gmitric, ODOT project manager. “We beefed up the shoulder, and have one lane on the shoulder and one on the right lane, then a concrete barrier. You bring the southbound over and cross over on northbound side. You have three lanes on the northbound side, two going northbound and one going southbound. Then you keep the other southbound lane on the south side. In essence, we have permitted lane closures. It allows the contractor on very unpeak hours to take it down to one lane. During heavy traffic hours, we have to maintain two lanes in each direction.”

The process can make for some headaches of its own. But Jim Allega, partner in the family-owned Anthony Allega Cement Contractor Inc., has devised means of making the work faster and more efficient than ever.

“Allega has a lot of new equipment out there,” said Gmitric. “There are a couple of excavators, graders, loaders. But what is really interesting is how they use GPS out here on their equipment. They actually took a Polaris little quad and mounted the GPS on it and has it attached to a sprayer. It lays out all the striping through GPS and he lays it out in a hurry. Anything you need to lay out, you lay out with this. It's very accurate, very, very efficient and fast.”

The contractor started working with GPS and robotics in 2000, said Allega. In the years since, they've become innovative in modifying the existing equipment to fit their needs.

“We do things other contractors don't do,” Allega said. “I have a few patents on things that give us a little edge. We use Trimble controls for GPS. All of our equipment is equipped with GPS and/or total station controls. What I've done is by taking a piece of equipment and taking some Trimble and modifying it, I am able to do all my lay outs and grade checking with that. In the old days to lay out lines, you walked around with a Trimble piece of equipment that worked off the satellite and a base station. With this machine [I am in the process of patenting it right now], I can do the layout in 10 percent of the time with one man instead of a survey crew. Striping, paving lines, there are so many things.”

Allega also has a device for moving cones and barrels when opening and closing traffic zones every day.

“You have to go out there and pull the traffic control equipment out of the way,” Allega said. “I came up with a device a few years ago where I can move the barrels and either set up or tear down — something that would take five or six hours with three guys — with one man in 20 minutes. We were doing eight mile zones, set up and tear down every day. The main body is a Polaris Brutus. We have a couple at work all over the place.”

Working with ODOT's District 4 team, Allega also has helped come up with a better asphalt joint.

In typical asphalt paving, you roll it out, and you do not have a perfect edge and that material, when you pave for width, can overlap the joints and that gives it structural integrity so it doesn't crack,” said Allega. “With contraflow, you can't do that because you have traffic on one side.”

“We tried two different methods. We milled off eight to 10 inches of asphalt, then put the next layer in, paving up against the confined joint. When we pave the first lane, switch traffic over and come back to pave next layer, we will remove about 10 inches of that asphalt that is loose. We clean it and tack it properly. We not only tack it, but use an asphalt adhesive in that joint. I started using it 20 years ago. On this job, we have zero center line cracking. Zero. That even impressed me. That's hard to do.”