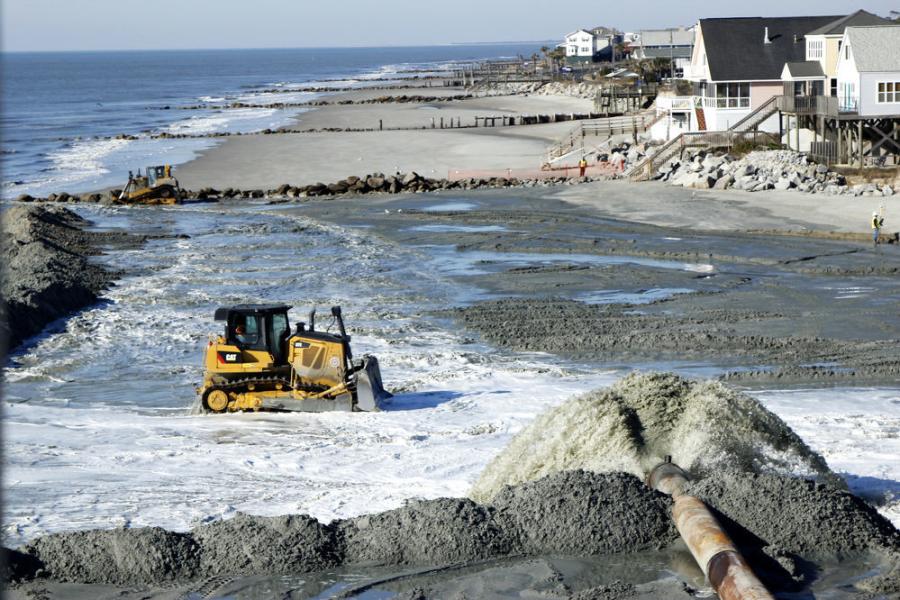 A view from the CRAB shows work progressing along the beach as dredged material flows from the pipeline. (Sara Corbett, U.S. Army Corps of Engineers photo)

Twenty-four hours a day, seven days a week, a mix of tools and machinery is hard at work in a part of South Carolina known as a place for fun and relaxation: the coastline in and around Myrtle Beach.

The area beaches are part of South Carolina's 60-mi.-long Grand Strand, a series of seaside communities stretching from the North Carolina border to Georgetown.

Known worldwide for its gentle ocean breezes and top-tier golf resorts, the northern section of the Grand Strand includes Myrtle and North Myrtle beaches, as well as Garden City and Surfside Beach.

Sometimes, though, those breezes are anything but gentle.

In recent years, Hurricanes Matthew, Irma and Florence have all menaced the Myrtle Beach area — in the process vividly reinforcing the need for periodic (and expensive) renovation of the beaches between their seaside homes and the Atlantic Ocean.

In a project that began last summer and is currently on hold for the winter, the beaches in the northern Grand Strand, Horry County, are undergoing a major 26.2-mi. rehabilitation involving a sand and berm upgrade. The multimillion-dollar job is designed to protect the beaches, as well as the valuable beachfront homes, from problems that range from the rather mild effects of high spring tides to the ravages of hurricanes and nor'easters that stalk the Southeast coast almost annually.

The rehabilitation process is repeated about every seven to 10 years, depending on when and if Mother Nature decides to go on a stormy rampage. Myrtle Beach and its sister beaches last underwent facelifts in 2008.

"Hurricanes and heavy storms do shorten our timetable because they eat away at that protective storm berm," explained Wes Wilson, project manager of the U.S. Army Corps of Engineers, Charleston District. "We had a good run of luck at Myrtle Beach when it came to big storms when you factor in that we did the initial construction in 1996 and our first rehab in 2008. After that, the next scheduled rehab was last summer, so the area has been averaging one rehab about every 10 years."

The USACE awarded a contract worth more than $34 million for the Myrtle Beach Storm Damage Reduction Project to Great Lakes Dredge and Dock Company LLC, which was tasked with placing approximately 1.4 million cu. yds. of material on Myrtle, North Myrtle, Garden City and Surfside beaches. 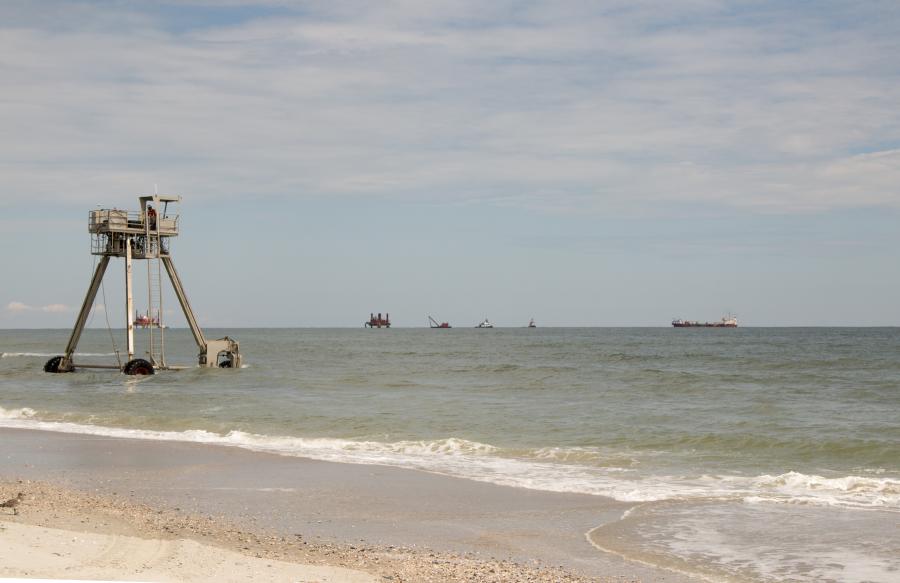 A coastal research amphibious buggy, or CRAB, is used to survey the surf zone during the beach rehabilitation of Myrtle Beach, S.C. Behind the CRAB are two dredging platforms stationed over the sandbar. The next three vessels are small work boats used to assist in dredging projects. At far right is one of the hopper dredge ships. (Sara Corbett, U.S. Army Corps of Engineers photo)

The work followed a 2017 sand renourishment emergency project in the same communities, in which 1.3 million cu. yds. of dredged sand was placed in the wake of Hurricane Matthew.

Not long after the latest project began late last summer, Great Lakes' crews at the Grand Strand were stopped in their tracks by the threat of a monster storm heading toward the Southeast coast in September.

All their equipment, including offshore hopper dredges to pull tons of sand off the shallow ocean floor, as well as submerged pipes, shore pipes and bulldozers to shape the sand blown onto the beach, had to be brought in and secured tightly.

The contractor, city officials, residents and tourists all feared the worst when mighty Hurricane Florence took aim straight at the Grand Strand beaches packing Category 4 winds. Just as it was about to hit the area, though, it weakened and veered slightly to the north, finally making landfall at Wrightsville Beach, N.C.

After the storm passed, USACE scientists made damage assessments before work on the beach resumed. They found Florence had caused enough damage for the federal agency to ask the contractor to pipe in larger quantities of dredged sand than called for in the original contract.

"When they come back in the early spring, Great Lakes will dredge about 500,000 cubic yards of sand onto North Myrtle Beach, Myrtle, Garden City and Surfside — a job that will probably take another month and a half, once they get everything mobilized," Wilson explained. "With that, we should get all caught up on hurricane work."

Great Lakes employs two trailing-suction hopper dredges for the Grand Strand beach rehabilitations, Wilson said. These unique ships have a full sailing capacity used to maintain navigable waterways and, among other tasks, are specially designed to replace sand eroded by storms or wave action on beaches. They utilize large, powerful pumps and engines able to suck up huge amounts of sand, clay, silt and gravel.

In the shallow waters off the Grand Strand, the hopper dredges in action for Great Lakes are the 281-ft. Dodge Island and its identical twin, the Padre Island. Both are stationed over sandbar sites close to shore, Wilson said.

"They are great at sucking up sand from the ocean floor, and a booster pump helps place the sand onto the beach through underwater pipes," he said. 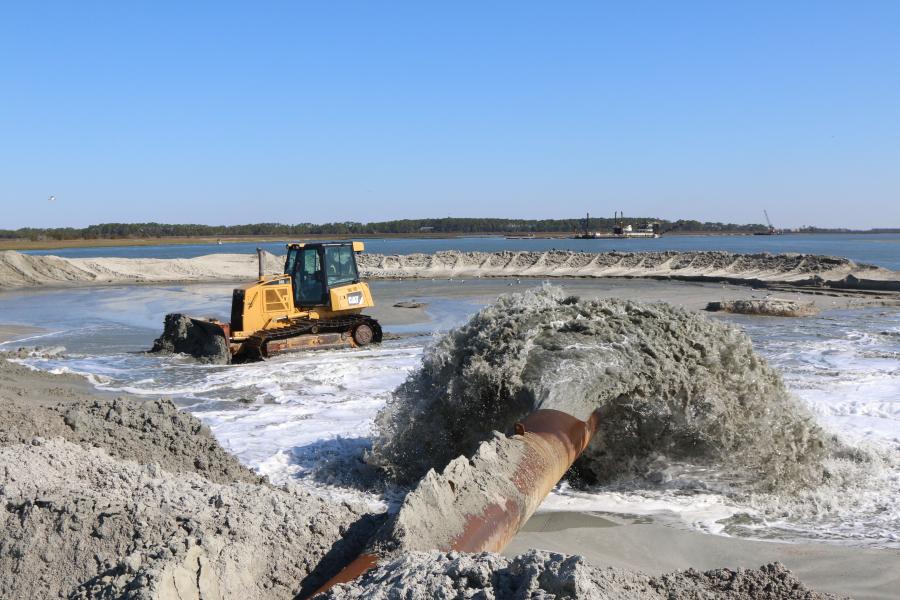 Work crews use elbow-pipe segments to direct sand where it needs to go before bulldozers shape it and level it out to meet the design template. (Sara Corbett, U.S. Army Corps of Engineers photo)

Additional equipment at the site included pipe loaders and excavators to move and place the pipes along the beach, and a specialized, three-wheeled vehicle called coastal research amphibious buggy, or CRAB. This safe and efficient platform was designed by Great Lakes Dredging and Dock specifically to survey the surf zone on beach renourishment projects.

"We have three different sandbar sites adjacent to our Myrtle Beach project," Wilson said. "The bars are very large and are located from one to four miles off shore. The shallow water makes hopper dredges very efficient there, as opposed to other beaches where you need to use cutter heads that can just sit on a single deep sand deposit and pump the material through the pipeline. The fact that hopper dredges can move easily from place to place also makes them more efficient."

The safety and convenience of the public coming to the Grand Strand is always at the forefront of the minds of the USACE and the contractor, according to Wilson.

The rehabilitation work often moves down the beach at the rate of 500 ft. per day, and sometimes more, he added, depending on the type and quantity of material that needs to be placed. The goal is to get the task accomplished and keep any section of beach closed for only two or three days at the most.

Another arm of the beach rehabilitation was at Folly Beach and Bird Key Stono, the latter being a 20-acre sandbar at the mouth of the Stono River. The tiny island is a protected animal reserve that provides a nesting, roosting and foraging habitat for a variety of sea and shore birds.

Both Folly Beach and Bird Key Stono, situated south of Charleston, were renourished a bit differently than the beaches to the northeast.

The $20 million project at those sites included placing 4.1 million cu. yds. of material by Charleston's Marinex Construction Company, experts in restoring and rehabilitating shorelines and beaches.

"At Folly Beach, that job was a ‘beneficial use' project because we protected the infrastructure on the beach through the Myrtle Beach Storm Damage Reduction Project, and we also worked on two accompanying minor projects," Wilson said. "They included the dredging of the Folly River navigational channel and then placing that material on and around nearby Bird Key Stono. That sand placement works well to counteract erosion on the small bit of land."

Since Hurricane Matthew, a Category 5 behemoth in 2016, the federal government has paid about $76 million for beach rehabilitation along the northern Grand Strand, and a total of 4.2 million cu. yds. of sand has been placed so far, he explained.

"The purpose of this work is simply to protect the infrastructure at Myrtle Beach," Wilson said. "Its entire economy is driven by tourism, much of it on the beach. As an example, North Myrtle Beach is a town with 16,000 full-time residents, but more than 7 million tourists visited it in 2018."