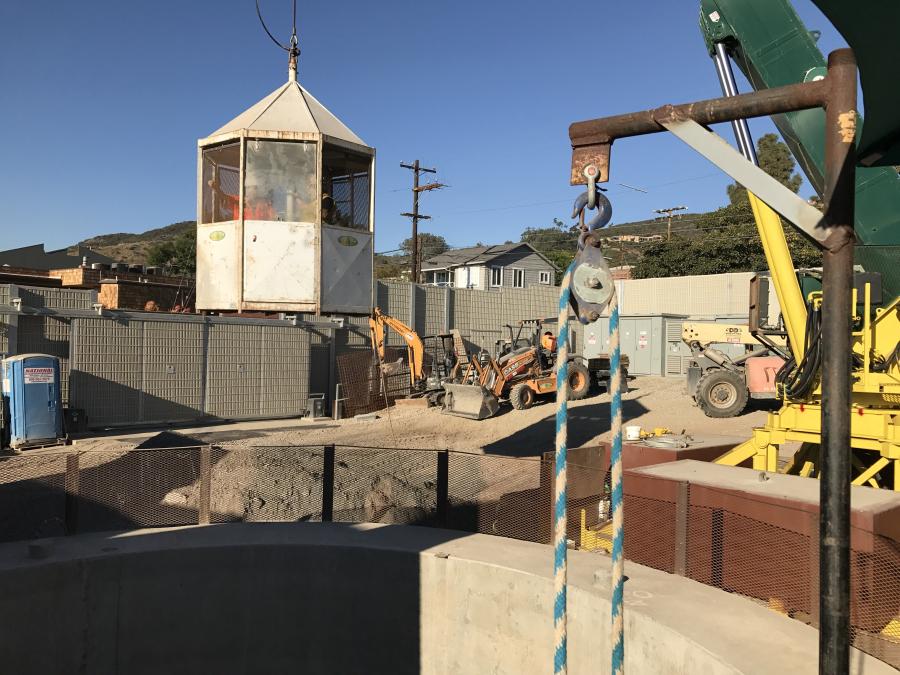 Crews continue working on an $80 million project to enlarge and stabilize a 2-mi., 62-year-old tunnel containing a new 24-in. sewer pipeline in Laguna Beach, Calif.

The South Coast Water District Board approved the project in 2010, followed by approval of the Laguna Beach City Council in 2013.

The tunnel and pipeline are the only sewer collection system in Southern California that has a sewer line inside of a tunnel within and below a bluff. The project started in March 2017 and is expected to continue through August 2021. 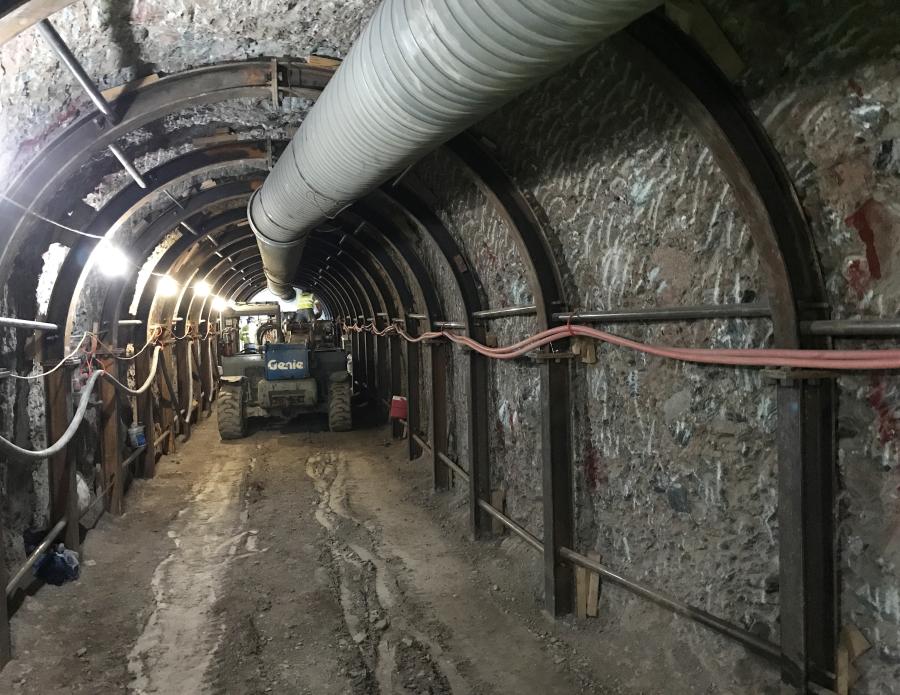 The project is described as a 100-year solution to upgrade the aging tunnel and protect the environment, local economies and neighboring communities from sewer leaks or spills. Besides enlarging and stabilizing the tunnel, workers will replace the current 24-in. pipeline that was last replaced in 1974.

The current pipeline, also 24 in. in diameter, will be encased in concrete, but preserved for redundancy and emergency use.

"This is a sanitary sewer serving beachfront homes and businesses along a two-mile stretch between Three Arch Bay and Aliso Beach in Laguna Beach," said Robin Rockey, public information specialist for the South Coast Water District.

Enlarging the tunnel will ensure safer working conditions and greater access for future pipeline maintenance and repair. Permanent tunnel lining and steel supports will be installed where needed.

Concrete will we sprayed onto the tunnel walls in a process called shotcrete.

The sewer line currently handles about 1 million gal. of wastewater each day. Built in 1954, the tunnel is said to be crumbling in spots.

The South Coast Water District reports that the tunnel has experienced several collapses and rock falls in recent years. Fortunately no worker injuries or sewer spills have occurred during the tunnel's history.

The sewer pipe carries wastewater along by gravity. That is significant because it eliminates the need for six to eight lift stations and individual sump pumps.

"The final lining as part of the ground support is shotcrete with a concrete floor," Rockey said. "Steel supports will be used in certain portions of the tunnel, as needed, in addition to the shotcrete." 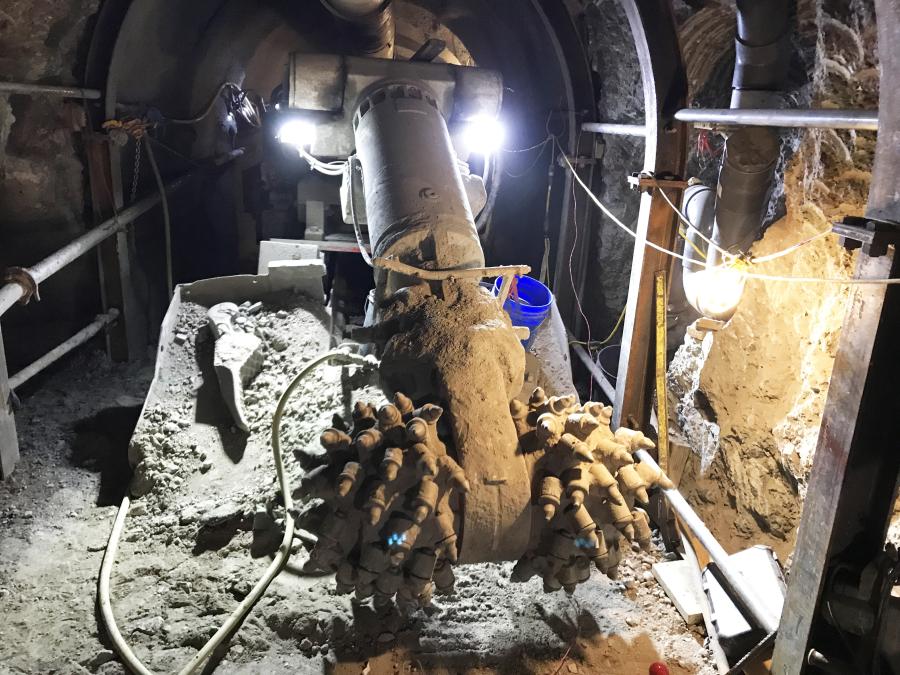 Crews will remove about 30,000 cu. yds. of dirt from the enlarged tunnel.

The project is being done in four phases. Phase 1 is complete. Phase 2 was initiated on May 9 for pre-construction submittals, survey and permits.

In addition, Phase 2 and 3 will use rail to haul debris.

Special equipment includes a roadheader to mine the tunnel. A roadheader, also called a boom-type roadheader, road header machine, road header or just header machine. It is a piece of excavating equipment consisting of a boom-mounted cutting head, a loading device usually involving a conveyor and a crawler traveling track to move the entire machine forward into the rock face.

The cutting head can be a general purpose rotating drum mounted in line or perpendicular to the boom, or can be special function heads such as jack-hammer like spikes, compression fracture micro-wheel heads like those on larger tunnel boring machines, a slicer head like a gigantic chain saw for dicing up rock, or simple jaw-like buckets of traditional excavators. 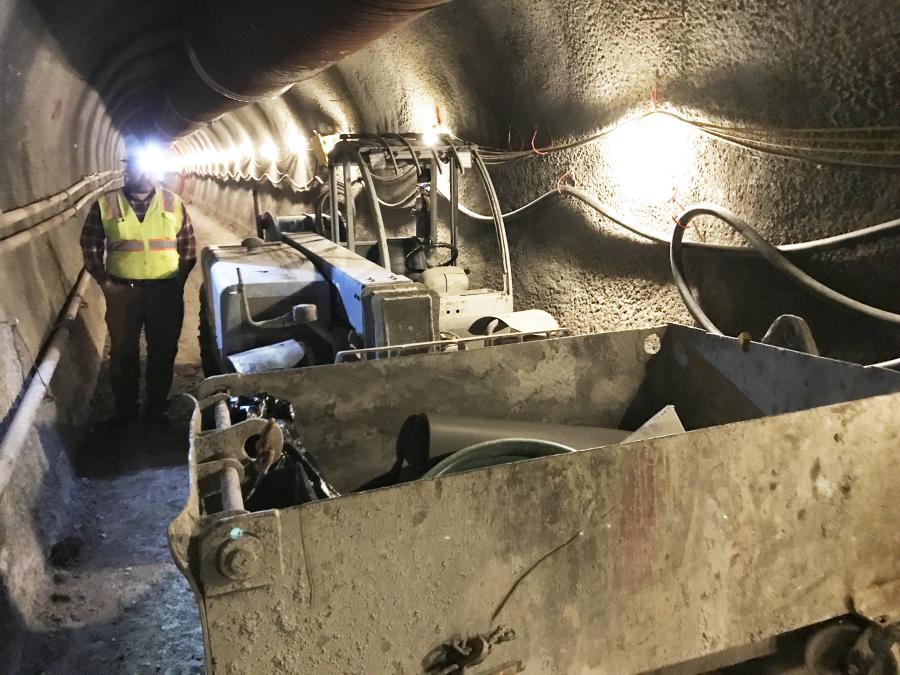 During Phase 2, about 20 workers were on the job daily. That number is expected to rise in Phase 3.

The project is expected to have noise impacts within the local community. However, 12- ft. sound-containing walls should keep noise levels down.

Also, some traffic is expected near the construction area, but it is not expected to substantially impact the level of service on South Coast Highway.

In addition, heavy trucks could cause some damage to nearby Camel Point Road, the South Coast Water District reported.

Mitigation efforts include use of a van pool to transport workers to the construction sites; construction only on weekdays from 7 a.m. to 6 p.m.; one-week construction breaks on major holidays; a traffic control plan to limit the number of daily truck trips; restricting weights on trucks; and repairing Camel Point Road before and after construction.

The system seems to be working. Not only is the project environmentally friendly, it is on time and under budget.

The South Coast Water District will keep in touch with residents near the construction site through a variety of sources including a website at scwd.org/projects/tunnelmain1/default.asp; project hotline phone numbers; and email and Facebook links.

"The team has been deeply aware of the impact that this project could have on the neighboring Laguna Beach community," said Rockey. "The proximity of this work to homes and the recreational beaches required a commitment by the project team for community awareness and a highly-coordinated public outreach program to minimize negative impacts to the community. The numerous project-specific environmental requirements and continuous monitoring activities were addressed and compiled with the EIR requirements."

The wall was constructed to blend in with the surrounding neighborhood using a carefully chosen wall color and landscaping. Per the request of the neighbors, a remotely controlled sliding sound wall gate was installed at the shaft site, in lieu of a swinging gate, to ease the closing of the gate, save the swinging space area, and ensure adequate noise attenuation.

The gate presented its own challenges as it was built on a steep street slope.

In addition, all construction vehicles and equipment must be equipped and maintained with properly operating sound attenuating devices such as mufflers and ambient adjusting backup alarms. To further reduce noise, South Coast Water District invested in a new electric feeder station, including three new transformers, to eliminate the continuous operation of diesel generators on site.

This electrical power allows the integration of an electric crane in lieu of a diesel crane to hoist spoils out from the shaft. The electric crane reduces both the noise and emissions produced on site. 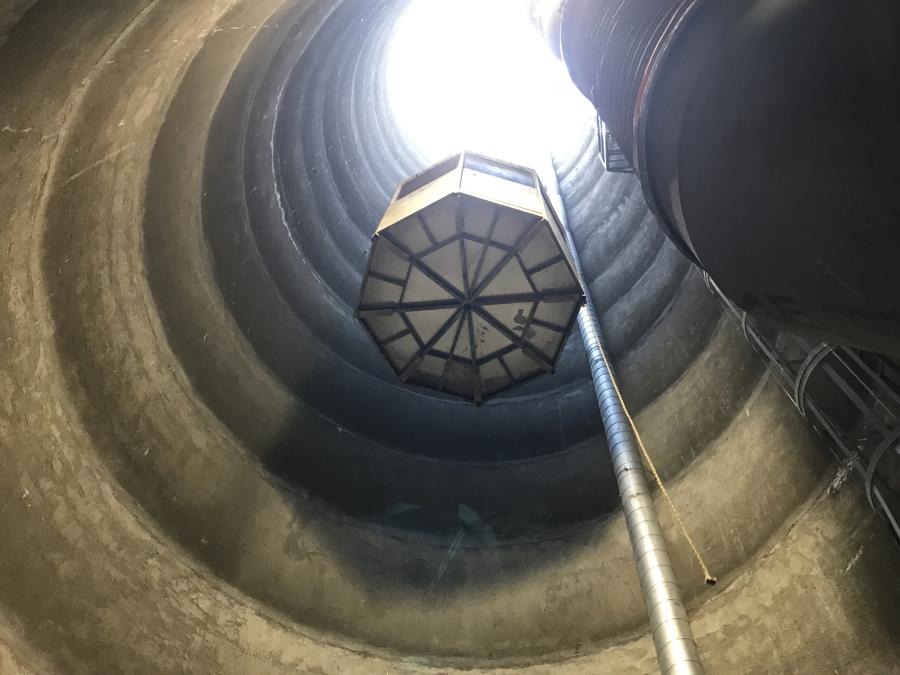 From an air quality perspective, the South Coast Air Quality Management District's rules and regulations are followed in order to reduce short-term fugitive dust impacts on nearby residents. Restrictions include the control, prevention, and collection of dust from all active portions of the construction site, such as installing ventilation dust collector systems, limiting onsite vehicle speed, as well as housekeeping and dust watering requirements.

If dust is visibly generated and travels beyond the site boundaries, dust-generating activities must cease until winds have abated or activities have been modified.

To reduce vehicle emissions and congestions in the neighboring streets, on-road vehicles are not allowed to idle for more than five minutes in private roads and residential areas. In addition, queuing of construction trucks accessing the sites is prohibited. The contractor also provides a vanpool to the site and encourages ridesharing for the construction crew.