Crews are constructing one lane in the existing inside median, both northbound and southbound, from McFarland Parkway to state Route 369. 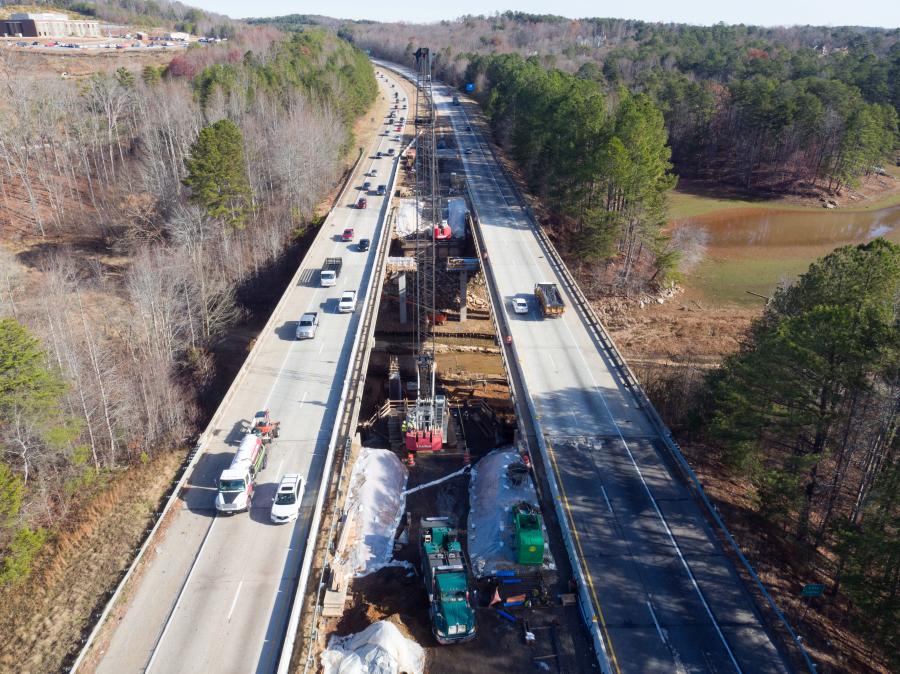 “The work is being completed in stages,” said Richard O'Hara, GDOT project manager. “The design-build contract mandated opening SR 400 in four-mile segments as they were completed. The approach to the work was to begin where congestion was worse and would have the most benefit, in the northbound direction at McFarland Parkway. Instead of the minimum four-mile segment, the contractor was able to open an eight-mile segment on November 5, 2016, exactly two years after the passing of the Forsyth County referendum. The project is a direct result of the referendum, because it was on the county's project list.”

Local and state officials held a ceremonial groundbreaking for the project in November 2015, featuring remarks by Forsyth County Commissioner Pete Amos. The work is currently scheduled for completion by October 2018. According to O'Hara, the intense schedule was an early concern.

“One of the biggest challenges to overcome was the condensed time frame for construction. We were on a very tight deadline to get the project going.”

Construction work started with clearing the inside shoulder, followed by placing graded aggregate base and 10 in. (25.4 cm) of concrete. While concrete was being poured, contractor CW Matthews also was working on widening the northbound bridge over Big Creek.

Work is currently being completed at the Suwanee Creek/Lake Lanier bridge, which is north of the initial 8-mi. (12.9 km) segment. Concrete paving will resume southbound in spring 2017.

“The extended drought experienced in north Georgia this past spring, summer and fall allowed the contractor to take advantage of good weather for paving and bridge work.”

“It is 14 miles in total length,” said Mullins. “The other objective is the rehabilitation of the outside shoulders.”

To date, crews have not experienced any major setbacks such as rock removal or other unexpected issues. Mullins said that the traffic state is the main concern.

Constructing one lane in the existing inside median both northbound and southbound from McFarland Parkway to state Route 369 called for a large crew, a good deal of equipment and plenty of concrete.

“Except for the last mile or so between 306 and 369, the new lane is constructed out of concrete. A concrete paving machine is used to construct the travel lane. On a good weekend of work, the contractor can put down a little over a mile of concrete pavement. There is a sub grade foundation of compacted dirt, followed by a graded rock base and then the concrete/asphalt,” said Mullins.

The two bridges on the project are each more than 100 ft. (30.5 m) in length. One is located at McFarland over the Greenway, the other over Sawnee Creek before the Pilgrim Mill exit.

Mullins said no clearing was required for the project. All work commences within GDOT right-of-way, with grading at a minimum. Roughly 2 ft. (.6 m) need to be added or subtracted from the existing ground for the new travel lane.

There have been no safety issues to report, so far; however, working in an environment with traffic nearby poses a significant threat to highway crews that have been putting in long hours.

“It's dangerous to say the least. The guys working out there are used to it, but they understand the risks. Even the smallest car driving by at 60 mph can be rattling. People who drive through the work zone over the speed limit don't realize it,” Mullins said.

“All of these, and much more, are used for the concrete/asphalt pavement aspect of the job,” said Mullins. “Cranes are the main figures for the bridge work.”

Concrete and asphalt are among the chief materials being used during construction. Stronger variations of concrete are required on bridges for the foundation and deck work.

Mullins said the most time-consuming part of the construction involves communication.

“This requires relaying information back and forth between the department, the contractor and the traveling public. The contractor knows what to do as far as completing the work. It's my job to relate this information to the public, even if they don't necessarily want to hear it. Communication is key, and that is why it demands so much time.”

The U.S. Army Corps of Engineers (USACE) issued two separate 404 permits. Section 404 of the Clean Water Act regulates impacts into waters of the U.S., and is administered through the U.S. Corps of Engineers for the work at Big Creek and Sawnee Creek/Lake Lanier. This allowed the contractor to appropriately phase the bridge work.

The Big Creek bridge accommodates a multi-use path under the bridge, so coordination with local officials was required for the temporary closure associated with construction to address safety concerns. The recreational trail was reconstructed and opened to the public within the approved closure period on the popular pedestrian path.

A dredging permit was obtained from the USACE local office at Lake Lanier to accommodate the required removal of silt to offset bridge construction impacts. The dredging was completed with equipment the contractor had on site in advance of the permitted deadline period.

The 404 permitting process and dredging permit process reviews were completed without delay, allowing the bridge construction to remain on schedule.

Forsyth County residents passed a $200 million referendum, with $50 million of the funds obligated to this specific project. GDOT allocated an additional $13 million. According to Andrew Hoenig, GDOT project manager, the SR 400 widening effort was one of the first GDOT projects to use entirely state and local funding without federal funds.

“While this project was in the beginning stages of development, the Georgia General Assembly was developing language for increased state funding for transportation,” said Hoenig. “With the successful, quick delivery of the project, it helped to ensure confidence that the department would deliver projects with this type of funding going forward. Additionally, for the first time, the department used a fixed-fee variable scope design-build contract, which allowed the proposers to bid up to 10 segments of widening.”

A maximum budget was set at $63 million to include potentially 14 mi. (22.5 km), if the full scope was achieved. All bids received included the full scope of the project, and the winning bid was $47 million, coming in at $16 million under budget. The savings allowed Forsyth County to fund an additional project along the same corridor.

“Forsyth County residents voted on a referendum, which included $50 million for this project, and the department obligated an additional $13 million,” said Hoenig. “Forsyth County, located in north metro Atlanta about 30 minutes north of downtown, voted in favor of this referendum to widen SR 400, which is a vital thoroughfare through the County. State Route 400 is one of three arteries which lead north of Atlanta, so it serves primarily commuter traffic during the peak a.m. period in the southbound direction, and the peak p.m. period in the northbound direction.”

The referendum was passed in November 2014. The department moved swiftly through the design-build process and was able to award the contract to CW Matthews/ ICE Consulting in May 2015. Roughly six months later, the department began construction. Within two years of the referendum passing, an 8-mi. portion of the widening was opened.

“GDOT acted quickly on developing a project concept report, which was conducted internally by GDOT staff and completed in February 2015,” said Darryl VanMeter, GDOT state innovative delivery administrator. “A Georgia Environmental Protection Act (GEPA) document was initiated in early 2015 to study the project area. The GEPA document was not finalized until after award of the project, in July 2015.

“GDOT prioritized weekend roadwork by allowing the contractor to close one lane on Friday night and open back up Monday morning. This innovative approach, although not without weekend delays, saved the department approximately 10 months of construction time and over $1 million in traffic control costs by allowing continuous closures.”

Construction throughout the remainder of the work week was restricted to overnight or off-peak hours to reduce the impacts on commuters. To date, feedback from the public has generally been positive, despite the understandable inconveniences.

“The project has been a major success in terms of reduced travel times,” said VanMeter. “A major bottleneck was eliminated at McFarland Parkway, and travel times to north Forsyth County have been reduced by 20 minutes, in some cases.”

“State Route 400, although a major Atlanta artery, is only two lanes in both directions north of McFarland Parkway. Around the McFarland exit, SR 400 decreases from four lanes to two lanes northbound and southbound, creating a significant bottleneck during the p.m. commute.