The purpose of the $34 million project is to replace the I-190 Interchange due to structural deficiencies. 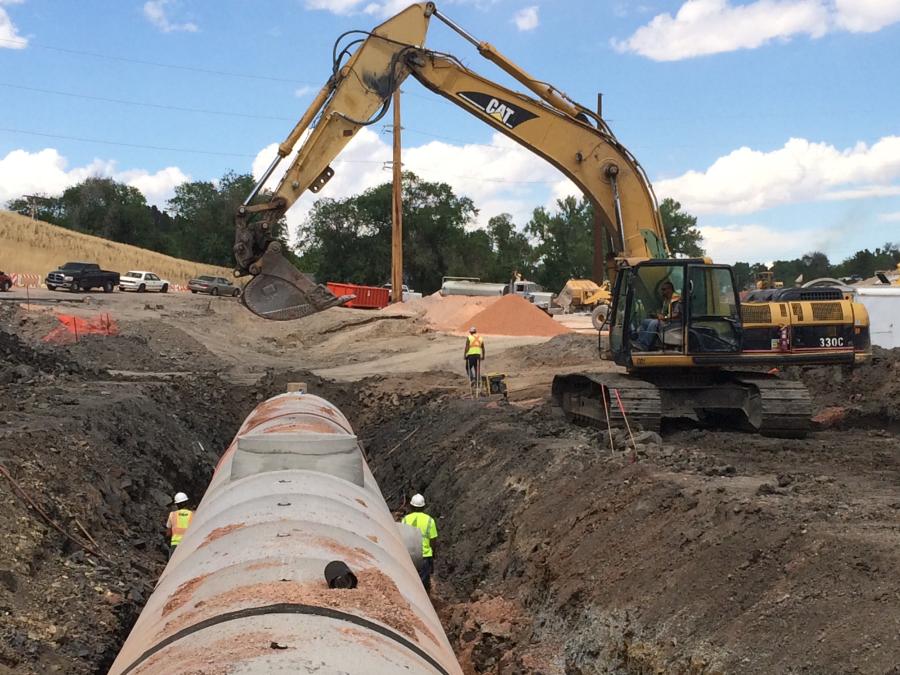 SDDOT photo. Many utilities needed to be relocated.

Construction teams in Rapid City, S.D., are working long hours to build a new single-point interchange at Exit 1 of Interstate 190. Activities include the erection of a new bridge, the demolition of the old bridge and completion of an interchange for access directly from I-190 to and from North Street, Silver Street and Philadelphia Street. The purpose of the $34 million project is to replace the I-190 Interchange due to structural deficiencies of the existing bridge and safety issues with the current interchange layout.

“The need was two-fold,” said Todd Seaman, region engineer, South Dakota Department of Transportation (SDDOT). “First, there was the condition of the existing bridges over Silver Street. Both bridges were built in 1958 and have structural issues. The southbound bridge, in particular, had significant issues requiring a reduced load carrying capacity. Second was geometric issues with the interchange. The northbound on-ramp was 'split' for the main section of the interchange. Northbound traffic had to travel through a residential street to access I-190.”

Seaman said the split ramp also created issues/confusion with traffic finding the northbound on-ramp. In addition, the horizontal and vertical alignments created issues. The bridges over Silver Street were on an horizontal curve, which lead to higher than typical accident rate for an interstate highway. The vertical clearance under the Silver Street bridges was less than typical. This lead to many vehicle bridge collisions.

According to Seaman, northbound traffic, traffic from the Rapid City Civic Center and Rapid City Central High School will have direct access to I-190. The new alignment of I-190 will reduce crashes, and the new bridge will allow trucks to haul legal loads. In addition, pedestrian and bicycle access also will be improved. Crews will install a bike path along the western side of the interstate to the north, and a sidewalk along 11th street with connection to the Rapid City bike path.

Prior to construction, the average daily traffic for I-190 was 22,000 vehicles per day. In addition, the local street system handles an estimated 6,300 vehicles. Seaman said there have been no issues to date regarding traffic detours.

“Over width vehicles are being re-routed. The roadway is being built half at a time, so normal traffic is not being detoured. I-190 does see an increase in traffic during the Sturgis motorcycle rally. A traffic plan is in place in anticipation of congestion.”

“Less than ideal soil conditions created some design issues for the DOT engineering staff,” Seaman said. “Soils in the large hill removed on the west side of the project contained two distinct layers of soil. In addition, the ground below the large cut area to the west was expected to swell, or rebound, up to a foot when the material above it was removed.

“The rebound period was expected to last six months, during which time crews were not allowed to install any new infrastructure in the rebound area. The stockpiles remained in stockpiles until the rebound period expired, as there was no place to deposit the materials in their final locations until construction began on the new southbound lanes of I-190 in the spring.”

This is the second phase of a two-year project to reconstruct the interchange of about one-mile of Interstate 190. Reede Construction Inc. of Aberdeen, S.D., is the prime contractor on the project.

According to Jesse Bruns, Reede Construction estimator and project manager, “There's definitely a lot to keep up with. Right now we're working on some of the concrete pavement, and there's a lot of utility work getting done.”

Work on the I-190/Silver Street interchange project in Rapid City began at the end of August 2015. The reconstruction project closes the southbound on-ramp of 1-190 (Exit 1) and its connection to Philadelphia Street for the next two years.

Initial work included clearing of trees, shrubs and old foundations west of Silver Street, removing the existing southbound on-ramp pavement and stockpiling soil to be reused on the project. Construction has been under way for more than ten months. The project is currently in Phase II, which is expected to last until the fall of 2016. Significant work has taken place in the last month, including construction of MSE walls “A” and ”B”, with MSE wall “C” along the new southbound off ramp in the final stages of completion. In early summer, placement of base course for the southbound lanes took place. Longitudinal underdrains were installed north of the bridge to help with subsurface drainage.

The first phase of the new bridge deck has been poured, with work continuing on the bridge barrier. The first of three concrete pours of the deck was completed in June. To avoid extreme heat, the pour was performed in the early morning hours, before sunrise. In addition, the storm water detention pond at the south end of the project is virtually complete.

Utilities upgrades include storm sewer, sanitary sewer and water lines. Construction of the 1,800 linear ft. (548 m), 96-in. (243 cm), storm sewer continues, along with storm sewer placement in the southbound lanes. The work is among the most time consuming parts of the project, along with completion of the new bridge, which is critical.

“Demolition of the southbound section of the old bridge has already been completed. That took about two weeks or so” Bruns said. “Right now, traffic is running on the northbound side. Once we switch traffic to the new structure, we'll demo the rest.”

Approximately 450,000 cu. yds. (344,049 cu m) of dirt/material is expected to be moved on the project. Heavy equipment on site includes cranes, backhoes, trackhoes and six scrapers, in addition to loaders, 15 concrete trucks, pavers and trimmers. Materials include concrete pavement, asphalt pavement, gravel and special materials for the soil nail wall.

“In a job of this size, just the amount of work that's going on is a big challenge, Bruns said. “Weather is also an issue. It has been good recently, but earlier this spring, we had a wet spell. We lost a couple of weeks, but now we're back on track. The heat is also something we have to deal with.

“This is one of the biggest jobs in South Dakota in the last handful of years. We have a deadline to meet, but you have to do it right. You don't want to rush yourself, because there's so much depending on what we're doing.”

HDR of Rapid City, S.D., was the study consulting engineer and roadway and soil nail wall designer and environmental assessment preparer for the project.

SDDOT contracted with HDR to execute a multi-phase study to evaluate the design operations policy and funding implications of replacing the Silver Street interchange on I-190 in Rapid City. The study was prompted by structural deficiencies with the Silver Street Interchange bridges and included evaluating the option to re-designate I-190 from the Interstate system to an expressway or arterial street.

During the first phase of the research, HDR engineers developed eight interchange and intersection alternatives to replace the existing interchange. HDR worked with SDDOT and city officials to measure public opinion regarding the possible changes. HDR also estimated the implications on federal funding, suggested a path for regulatory approval and forecast the impacts on transportation operations and the environment. A Phase I study report was created, detailing each of the options and providing construction cost estimates. Phase II of the study included a detailed analysis of each non-eliminated interchange option to provide sufficient information to allow design scoping and preparation of required reports.

HDR designed a new single-point urban interchange at Exit 1 of Interstate 190 in Rapid City. The existing bridge was in need of replacement due to significant structural deficiencies along with safety issues associated with the interchange layout. Final design activities included grading plans for the embankment ramps and modifications to the adjacent street network, as well as erection of a new bridge structure at the interchange, providing access directly from I-190 to and from North Street Silver Street and Philadelphia Street. HDR completed design documents for grading, traffic control, traffic signals, lighting, pavement markings, permanent signing, erosion control, cross sections and pipe sections.

Final design also included extensive drainage evaluation resulting in several miles of storm sewer and an off line detention basin adjacent to the primary storm sewer outfall. An existing city frontage road and neighborhood thoroughfare West Boulevard was realigned with the project through an existing ridgeline mostly composed of shale. HDR led a geotechnical evaluation of the ridgeline area and recommended a soil nail wall after evaluating several options to stabilize the slope. The soil nail wall was designed and constructed utilizing 8,400 linear ft. (2,560 m) of soil nails with a reinforced shotcrete face covered by a reinforced fill slope.

The soils were considered by the SDDOT to be some of the worst material for construction in the state of South Dakota.

Described as a very visible project in Rapid City, the project affects a variety of users, including residents and adjacent schools. Officials have said everyone will have better access once the interchange is completed, including pedestrians and bicyclists.

Utility coordination during the design process was a big challenge, according to HDR staffers. Many utilities needed to be relocated, including transmission power poles. Coordinating the city utilities portion of the work was another challenge. During construction, the contractor has been tested by the site being in such close proximity to neighborhoods and residents; however, they have worked to accommodate access to homes and immediately address issues as they have surfaced.

The overall completion date for this project is July 28, 2017.