Las Vegas and Phoenix are the only U.S. cities of 1 million or more residents not linked by an interstate freeway. 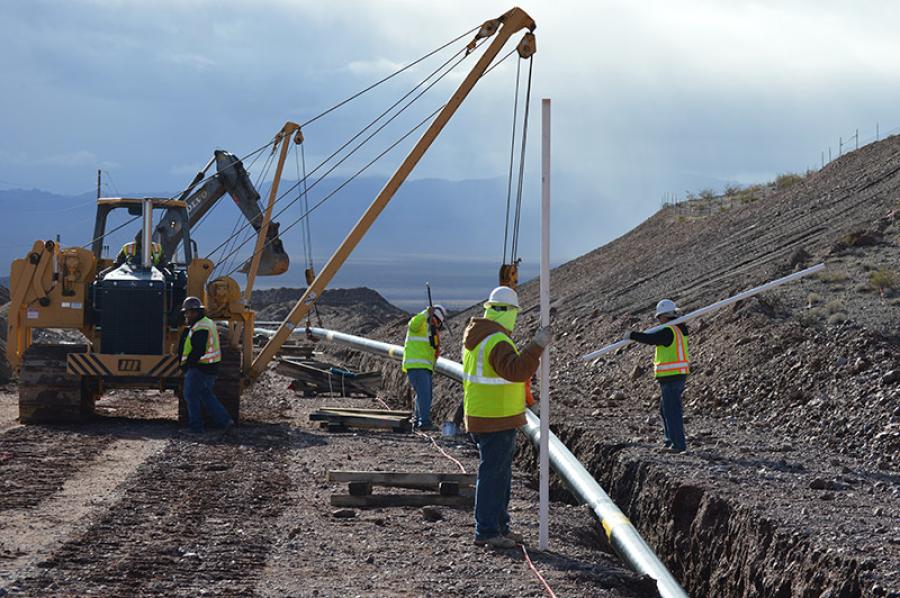 The Regional Transportation Commission of Southern Nevada and Nevada Department of Transportation took the lead in individual phases of a $318 million Nevada Interstate 11 project to connect a gap in existing interstate routes.

Las Vegas and Phoenix are the only U.S. cities of 1 million or more residents not linked by an interstate freeway. So the Regional Transportation Commission of Southern Nevada and Nevada Department of Transportation took the lead in individual phases of a $318 million Nevada Interstate 11 project to connect a gap in existing interstate routes.

The Regional Transportation Commission of Southern Nevada leads the project to span Interstate 11 with four lanes from U.S.-95 to U.S.-93 near the Hoover Dam Bypass Bridge, a length of about 12.5 mi. (20 km).

It is Phase II of the interstate project and will cost about $235 million. Phase I, headed by the Nevada Department of Transportation, includes a portion of I-11 from Railroad Pass to U.S.-95, a length of 2.5 mi. (4 km).

Both phases are being built simultaneously. Construction for both phases of Interstate 11 began in spring 2015.

A portion of the new interstate will be constructed through a ridge of the El Dorado Mountains. All right of way has been secured for both phases.

The two phases of work will be funded using $291 million in federal money, $22 million generated by an increase in the Clark County gas tax and $5 million in state funding.

Erecting fences and dust control also are part of their responsibilities.

“When complete Interstate 11 will improve safety and enhance travel and commerce between Arizona and Nevada,” said Monika Bertaki, public affairs administrator of the Regional Transportation Commission.

It also will eliminate major traffic congestion in Boulder City.

Besides improving travel, the two phases of construction are expected to create 1,000 new jobs both directly and indirectly related to construction of I-11. The new connection is expected to save driving time and improve safety. Interstate 11 also will reduce truck traffic through Boulder City.

The route will see about 34,000 vehicles daily and the new roadway is expected to save a minimum of 30 minutes from the Hoover Dam Bypass Bridge to Henderson. Once completed, drivers will no longer face traffic backups at signal lights. Speeds will be bumped up and even greater time savings will be possible on the weekends.

Separate Contractors for Each Phase

Fisher Sand and Gravel of Dickinson, N.D., is contractor for Phase1. It won the project with an $83 million bid alternative that uses concrete pavement instead of asphalt. Studies show that concrete pavement costs 13 to 28 percent less in the long run than asphalt by reducing rutting, potholes and maintenance expenses.

“Phase II will incorporate asphalt for a smoother ride for the traveling public as well as easier wear and tear on vehicles' tires,” Bertaki said.

Concrete and asphalt amounts for Phase I have not yet been determined.

The design-build process means the contractor performs the design and construction and the design is approved by the department overseeing the project prior to construction starting.

The Phase I project broke ground in May 2015, with anticipated completion in January 2018. Traffic impacts are expected to be confined to the last three months of the project.

The project's second phase should conclude in October 2018. No road closures are planned for Phase II.

Phase I Interstate 11 will consist of a continuous four-lane, controlled-access divided freeway and highway that passes south of Boulder City.

In terms of trades, about 10 will be used in Phase I of the project, said Adrienne Packer, Nevada Department of Transportation public information officer.

About eight are on site for the Regional Transportation Commission's second phase of the project, Bertaki said. The number of workers will reach more than 100 at full production, she said.

“Most work will be done during daytime hours, although some construction operations will take place at night,” Bertaki added.

The Phase I project utilizes heavy off-road earth-moving trucks, an onsite crushing plant to produce manufactured aggregates for the project and an onsite concrete batch plant for the concrete paving of the freeway.

The Phase II portion of the project starts with mass excavation and earthwork removal. To accomplish this, Las Vegas Paving is using mining-type equipment including a 933 Cat loader, 777 Cat rock trucks and D-10 and D-11 bulldozers. Additionally, the bridges in the El Dorado Mountains will require a large 600-ton (544 t) crane to erect the girders.

More than 1 million cu. yds. (764,555 cu m) of dirt have been moved under Phase II. A minimal amount of dirt will be brought on site. None will be moved off site.

The projects have moved along with few problems, but Phase I has faced some challenges in working around existing utilities. Also, workers must keep utilities in the area in service when water, sewer, electricity and gas lines are moved. This has caused some delays.

Construction impacts on the surrounding community are expected to be minimal because the new freeway is being built offline from U.S.-93, the highway currently in use.

Also, workers will use existing native vegetation to preserve the aesthetic integrity of the roadside and views. Crews will try to avoid degradation of surrounding landscape, including minimizing vegetation removal during construction.

They will incorporate a separated, shared-use trail within the right-of-way where possible. Landscape crews also will try to identify locations for wildlife crossings.

Phase I will include a pedestrian bridge that will connect Henderson's trail system with the River Mountain Loop Trail.