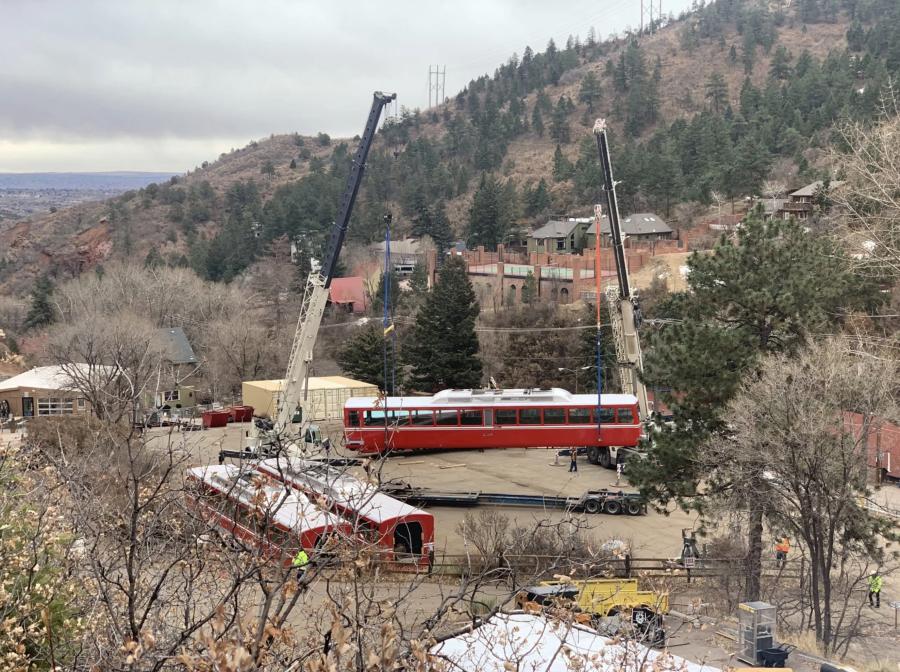 Work began in March 2019 on the $100 million project, which includes renovation of the cog railway’s tracks, cogs, rail cars and depots. Construction is expected to wrap up by the end of the year.

COLORADO SPRINGS, Colo. (AP) Construction of a new cog railway to the top of Pikes Peak near Colorado Springs is halfway finished, and the popular tourist attraction is on track to open to the public next spring.

Crews working on the Broadmoor Manitou and Pikes Peak Cog Railway recently completed construction of the second of three sections of track that allow trains to pass each other, The Colorado Springs Gazette reported.

The newly reconstructed Mountain View passing area is about halfway up the line to the peak, which tops out at 14,115 ft. (4,302 m) above sea level. The first passing area was completed in June at an area called Windy Point.

"The crews faced one of the toughest stretches of track to construct between these two points, a part of the line we call the ‘Big Hill,' which is the longest, steepest and narrowest portion of track," said Ted Johnston, assistant general manager of the railway.

Work began in March 2019 on the $100 million project, which includes renovation of the cog railway's tracks, cogs, rail cars and depots. Construction is expected to wrap up by the end of the year, with the first ride set to take place in May.

"Getting to the halfway point is a relief, and there's also a lot of excitement," Johnston said. "A lot is starting to come together."

The railway began taking passengers up the scenic route in 1891 and grew into one of the area's most popular tourist attractions. It carried upwards of 2,300 passengers a day before it closed in late 2017 for winter maintenance.

Aging infrastructure and equipment cast doubt on the railway's future after The Broadmoor hotel, which owns the railway, could not guarantee it would reopen while studying the cost of the rebuild. But hotel officials struck a tax-incentive deal with the city of Manitou Springs to help finance the project.