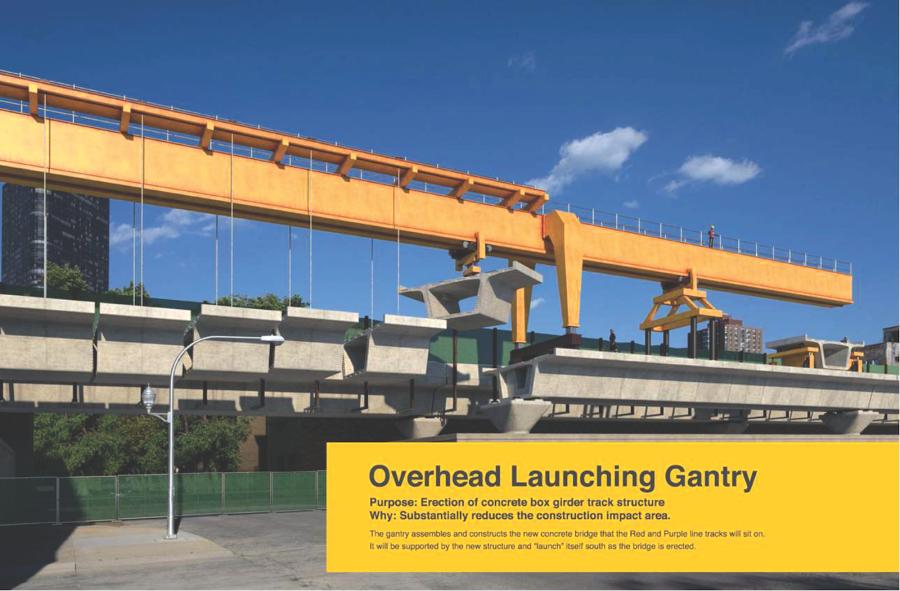 Most of the new track structure in the Lawrence to Bryn Mawr project area will be built with pre-cast concrete segments that are created off-site, trucked in and installed with a gantry system.

Mayor Lori Lightfoot and the Chicago Transit Authority (CTA) unveiled the designs for four Red Line stations that will be fully reconstructed as part of the Red and Purple Modernization (RPM) Phase One project, the largest transit investment in CTA history and the latest among several Red Line improvement projects over the last decade.

CTA will rebuild the Lawrence, Argyle, Berwyn and Bryn Mawr rail stations, transforming each into new, modern, larger and fully accessible stations to customers with disabilities. The new stations will include elevators and escalators, wider platforms and vastly improved amenities, better serving the more than four million customers who enter the stations each year.

The $2.1 billion RPM Phase One project is the first part of CTA's plan to rebuild the Red and Purple lines between Linden and Belmont. Phase One work will benefit the entire Red Line by addressing chronic overcrowding and delays while modernizing infrastructure that is more than a century old. The Red Line is CTA's busiest line, carrying nearly 70 million riders in 2019.

"Today's station design unveilings mark a historic day for Chicago transit as we continue to rebuild and revamp CTA's busiest line, the Red Line," said Lightfoot. "Public transit is the great connector of our city and with this monumental project, we are building on our obligation to ensure Chicago's transportation network is accessible, reliable and affordable so our residents remain connected to jobs, education and opportunity."

"CTA's Red Line forms the backbone of our city and is a critical transportation link for Chicagoans, including essential workers, who need efficient, reliable and modern service each and every day," said Dorval Carter, CTA president. "The RPM project's benefits extend beyond the project area by improving transit operations and by providing opportunities across the city through training, jobs and contract opportunities that will be a model for future CTA projects like the Red Line Extension."

CTA will fully reconstruct the Lawrence, Argyle, Berwyn and Bryn Mawr stations as well as rebuild and repair adjacent track structures. CTA stations are important cornerstones of the communities they serve, which informed the design of the stations. In developing the designs, CTA with construction contractor Walsh Fluor Design-Build Team and architectural firm EXP worked closely with people who live and work in the neighborhoods around the stations to develop designs to create an identity for each station, with each responding to the context and the culture of the local neighborhoods.

CTA anticipates the start of reconstruction work to begin in spring 2021 starting with demolition of existing structures. At that time, the Lawrence and Berwyn stations will close. CTA will open temporary rail stations at Argyle and Bryn Mawr to provide customers with access to Red Line service so that the original stationhouses can be reconstructed.

CTA will rebuild the tracks and stations between Lawrence and Bryn Mawr in two stages:

The track structure between Lawrence and Bryn Mawr, including viaducts and embankment structures, will be rebuilt and/or modernized as part of RPM. The first step of construction will include demolition of stations and track structures starting in spring 2021.

Most of the new track structure in the Lawrence to Bryn Mawr project area will be built with pre-cast concrete segments that are created off-site, trucked in and installed with a gantry system.

The RPM Program, which will be done in multiple phases, will rebuild the 9.6-mi. stretch of Red and Purple Line track structure and stations on the north side that are a century old. RPM will replace aging infrastructure; increase CTA's capacity to increase train service as needed; and improve our service for customers with more reliable, comfortable service. Future phases of RPM have not yet been announced and are currently unfunded.

RPM is just the latest in a number of Red Line projects announced and/or completed in the last decade, including: