The Connecticut Department of Transportation's (CTDOT) $34.8 million project to replace the Route 8/25 bridges in Bridgeport has exceeded the half-way point. 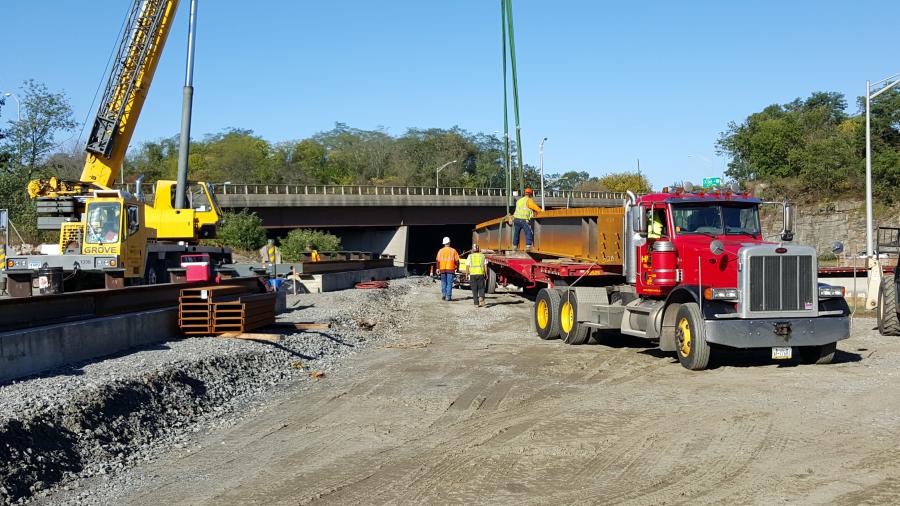 The Connecticut Department of Transportation's (CTDOT) $34.8 million project to replace the Route 8/25 bridges in Bridgeport has exceeded the half-way point as crews from Manafort Brothers Incorporated are working hard to meet the September delivery date.

The four bridges being rehabilitated carry an average of 88,000 cars over Capital Avenue, Lindley Street and a large parking lot. The Lindley Street Bridge consists of seven, 82 ft. (25 m) long spans with four 12-ft. (3.6 m) lanes and two shoulders in each direction. The project will reduce the bridge to two spans while keeping the same lane and shoulder capacity.

The Capital Avenue Bridge, consisting of a single span with four 12-ft. lanes and two shoulders in each direction will be replaced with a similar structure. The work also includes the construction of a large retaining wall to support 425 ft. (130 m) of new highway, the rehabilitation of the metal bin-wall retaining wall which is currently supporting Route 8 southbound, south of Capital Avenue and capacity improvements to two intersections on Lindley Street adjacent to Route 8 northbound.

The bridges will be demolished and rebuilt in a different configuration using accelerated bridge construction techniques. The new superstructures will consist of prefabricated bridge units (PBUs), which consists of two steel beams fabricated with an integral concrete deck to form a double tee section. The PBUs will be connected in the field with narrow longitudinal closure pours.

The Lindley Street Bridges will be reduced to two spans each by filling in five of the seven spans on each bridge. The pier to the north of the second span will be converted to an abutment by constructing a retaining wall behind the existing pier. The substructures to the north of the final two span structures will be left in place and buried. The area under the spans to be removed will be filled. The fill will be retained by concrete retaining walls built outboard of the existing bridge limits.

Federal highway funds cover 85 percent of the cost, with the remaining 15 percent from the state. The existing bridges, nearly 2 mi. (3.2 km) north of Interstate 95, were built in 1973 and according to CTDOT, have reached the “excessive deterioration” point and cannot be repaired.

“The bridges are part of CTDOT's bridge program which prioritizes work based on a continuous assessment of the remaining useful life of bridges and their need to be replaced or rehabilitated,” stated the project Web site. “CTDOT has determined that the bridges involved are reaching the end of their useful life and warrant rehabilitation.”

“The existing precast concrete beams supporting the roadway are experiencing what is called an Alkali-Silica Reaction, where, due to a chemical reaction within the concrete, the concrete literally self-destructs,” said Scott Adkins, project engineer of CTDOT. “While the bridges are currently structurally safe, there is no way to repair the beams, and therefore the entire superstructure must be replaced. In the 1970s, ASR was a common problem. Fortunately, advances in concrete construction have significantly reduced the occurrence of ASR.

“Lane closure and stage construction periods that would impact the travel lanes on Route 8/25 have been reduced from two years to two periods of approximately 14 days each,” said Adkins. “The ability to reduce the impact on the traveling public is very important to the department and played a central role in the design of the project and is part of the ‘get in and get out' policy put forward by CTDOT.”

Commenting on additional construction methods, which will reduce the long-term maintenance costs, Adkins said, “The new bridges, which have been designed to have a lifespan of nearly 75 years, are being built with what is referred to as ‘weathering steel' beams. Weathering steel has been used for more than 50 years and is a great alternative, as it does not require painting. In addition, five of the seven Lindley Street spans will be eliminated. The anticipated maintenance savings during the lifetime of the bridge is in excess of a million dollars.”

According to the Web site, “When the Lindley Street Bridge was built, the land adjacent to the Lindley Street Bridge was a parking lot for the Bridgeport Machine Company. Closure of the parking lot would have left the site with virtually no parking. The state decided at that time to build over the parking lot instead of displacing the company that was a significant part of the Bridgeport industrial community. Unfortunately the company no longer exists on the site so the state was able to work to secure the land beneath the bridge to allow the elimination of the spans.”

The bridges were designed by WSP/Parsons Brinckerhoff.

“The biggest challenge during the design of the project was finding a way to reduce the impact to the traveling public,” said Adkins. “We knew that a project that did not employ accelerated bridge construction methods would create long term impacts on the public. A great example of the success of ABC is the I-84 bridge replacement project in Southington, where the contactor replaced the superstructures over the course of a weekend.”

The construction schedule is based on two phases — two bridges per-phase. During two short term construction windows, one side of Route 8/25 will be closed for approximately two weeks. Traffic will be detoured across the median to the opposite side of the highway. Opposing traffic will be separated by concrete barriers for safety. There will be minor closures of Lindley Street and Capital Avenue during these periods to allow for the rapid construction. Minor local road detours will be used to accommodate local traffic.

The footprint of Route 8/25 will remain unchanged in the final configuration of the new highway infrastructure.

“The expressway has ample room for current traffic and future traffic increases,” stated the Web page. “There are also no safety concerns with the current alignment of the roadways, so re-alignments are not required. Minor changes are proposed for the northbound exit ramp at Lindley Street. An additional lane will be added to the end of the ramp to make more room for turning vehicles onto Lindley Street. The intersection at the Lindley Street ramp will be upgraded along with the intersection of Lindley Street and Route 1 (North Avenue).”

CTDOT noted that work will continue on the construction of PBUs in the construction area along Route 8 NB at Exit 5 and that in early summer, these PBUs will be transported to the Lindley Street and Capital Avenue sites to be set in place once the existing structures have been removed.

“With last winter still fresh in our minds,” he said, “we planned for the additional effort required to place PBU concrete during the cold weather months. Fortunately, the reality was unseasonably warm weather for late fall and early winter. This allowed us to place most of the concrete in quite favorable temps. All of the PBU concrete was placed prior to the first large snow storm of the season.”

This also is CTDOT's first design-build project and Gill is confident that Manafort has a thorough knowledge of the work, especially the upcoming bridge reconstruction.

“Construction of each stage will be limited to 14 consecutive calendar days for each stage,” he said. “During each 14-day period, one side of the expressway will be completed, including construction of two bridges and the final filling of the spans under the Lindley Street Bridge.

“Offline improvements consist of rehabilitation of an approximately 600 foot long metal bin retaining wall and intersection improvements in the vicinity of the Lindley Street Route 8 northbound exit ramp,” he added. “This metal bin retaining wall will be rehabilitated with precast concrete panels and soil nails extending under Route 8 southbound. The intersection work involves the widening of Lindley Street and the Route 8/25 northbound exit ramp at Lindley Street and replacement of the traffic control signal. This work also includes operational improvements at the North Avenue and Lindley Street intersection to the east. Offline work shall be completed prior to the construction of the Route 8/25 bridges in order to facilitate maintenance of traffic.”

The final construction stage involves a full width of asphalt overlay for the entire length of the project — approximately 1,600 ft. (487.68 m).

On a daily basis there are between 35 to 45 people on site doing regular extended shifts and second shifts, and with two-week closure period this summer, crews will be working round-the-clock. The key subcontractors are Hartland Building and Restoration; Santoro, Inc.; A&J Paving; Ducci Electrical Contractors; and Underground Builders.