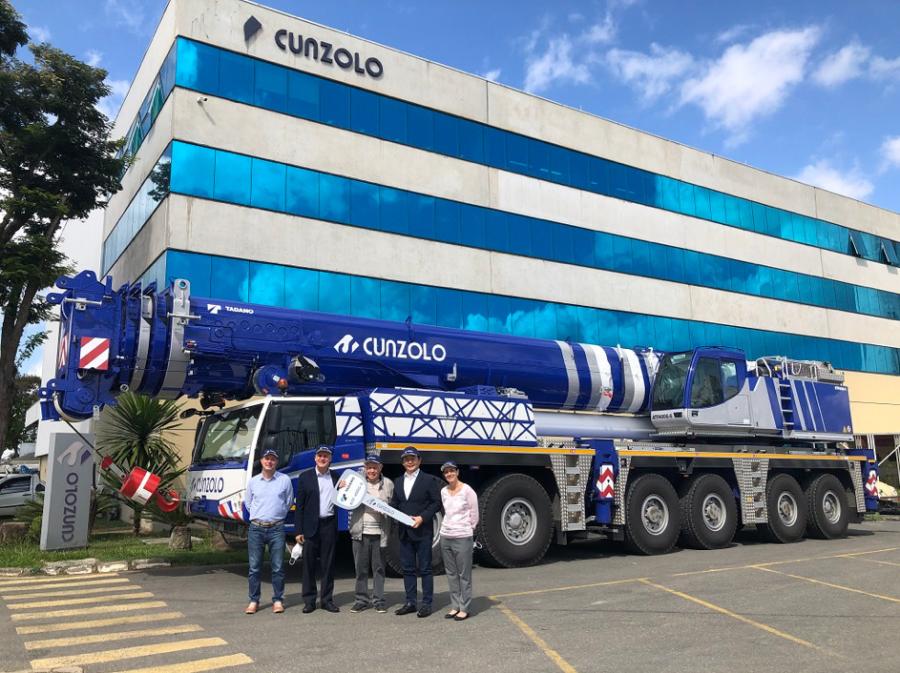 Brazilian crane service provider Cunzolo recently acquired a brand new Tadano ATF 400G-6 with all the bells and whistles: Among other equipment, the crane features a luffing jib and the "Power System" boom suspension system, which will enable the unit to safely tackle jobs involving complex lifts, cumbersome and heavy loads, and impressive heights all by itself.

This boom suspension system, which is one of a kind in the market, increases lifting capacity significantly and makes it possible, above all, to lift heavy loads while working with an extension. Together with the 257.5-ft. (78.5-m) luffing jib — which can be used to put together all possible jib configurations — this full level of equipment makes it possible to get combinations for an extremely wide variety of assignments.

By purchasing the 450 ton (400-t) Tadano ATF 400G-6 mobile crane, the company has significantly upgraded its fleet, which previously reached its lifting capacity limit at 242.5 tons (220 t). Accordingly, this new acquisition is a new milestone in the history of Cunzolo, which is known for continuously growing and evolving as a company by using cutting edge technology and special equipment of all kinds, according to the company.

Cunzolo has had a successful presence in the Brazilian market for 54 years and is continuously expanding its business activities. The company has two headquarters: one in São José dos Campos and another one in Campinas. In addition, Cunzolo has branch offices in Sorocaba, Taubaté and Três Lagoas.

In 1974/75, Cunzolo joined a group of companies that operated hydraulic cranes with capacities of 33.1 and 44.1 tons (30 and 40 t) and lasted well into the 90s. In the first decade of the 2000s, Cunzolo became one of the leading pioneers in the country's crane industry as a result of its use of jib cranes, remote controls and additional technical equipment that was previously not available in Brazil.

Additional highlights in the Cunzolo fleet include powerful truck-mounted cranes and industrial cranes that can travel under a load of up to 44.1 tons (40 t) and are particularly invaluable when it comes to demolition and removable work. In addition, the company also is successfully active in another industry sector with its aerial work platform rentals and work-at-height services.

Acquiring the Tadano ATF 400G-6 means that the company will be able to tap into additional business areas, including cargo handling, industrial projects and transportation projects.

In fact, Cunzolo is now significantly more competitive with the new crane — especially when it comes to bids for complex lifting projects involving large loads and long reaches. The new 450 ton crane is perfectly equipped for this with its five-piece, 197-ft. (60-m) telescopic boom and the fixed jib of 162.4 ft. (49.5 m) ordered by Cunzolo as well.

In addition, the company also bought all optional additional features, which make it possible to tackle a wide variety of applications. This includes the aforementioned 257.5-ft. (78.5-m) luffing jib and the PS boom suspension system. These options dramatically broaden the range of applications for the Tadano ATF 400G-6.

Also important: for a crane of this capacity class, the ATF 400G-6 is extremely maneuverable due to steerable axles, which enables it to flexibly adapt to adverse conditions as well.

"With the new Tadano ATF 400G-6, we'll now be able to also meet the needs of customers who would have happily asked for a crane of this capacity class earlier on. Needless to say, we'll also be able to win over potential customers that originally never contacted us because we were missing a crane of this size in our fleet. Thanks to the ATF 400G-6, we'll now be able to add a whole series of lifts to our range of available services," said General Director Marcos Cunzolo.

Within this context, he is thinking both of industrial assignments in the steel, petrochemical, cellulose and aviation industries and the construction of roads, bridges and viaducts that require, for instance, large and heavy structural elements made of concrete and steel.

On top of this, the crane is perfect for integration into the existing fleet, which means that Cunzolo will now be able to offer its customers even more integrated solutions.

"This is a decisive competitive advantage, as many contractors don't want to work with multiple companies for their projects, but would rather get all services from a single contact instead."

Rock-Solid Trust in the Tadano Brand

By acquiring this crane, Cunzolo is moving up to a new capacity class in the Brazilian crane industry. It is a courageous entrepreneurial decision, as buying the crane is associated with further investments. For example, the company had to acquire 10 additional truck trailers that will be needed in order to transport the boom, the accessories, and the 304,235 lbs. counterweight.

In terms of space, however, the crane came with zero challenges for the company: The premises and workshop are more than big enough for an additional crane of this size. And the Cunzolo team is perfectly prepared for the new arrival — after all, the company has been familiarized with the Tadano brand since 1978. That year, Cunzolo bought a 17.6 ton (16-t) TS 180L and mounted it on a domestic truck. And that was just the beginning: Today, the Cunzolo fleet features 15 Tadano cranes.

"The reason we trust the Tadano brand is its high quality and cutting-edge technology. And since our team is thoroughly familiarized with these cranes, both operating them and training new operators is remarkably easy," Marcos Cunzolo said.

Accordingly, he is confident that operating the new crane will go smoothly from the get-go.

"We have years and years of experience training crane drivers, and this means we'll be able to work the crane directly with our existing personnel."

In addition, operators have already received preliminary training on the most important aspects of the crane's configuration and operation at Tadano Brasil — moreover, additional training courses are already planned for the delivery and in the next two years of the warranty period.