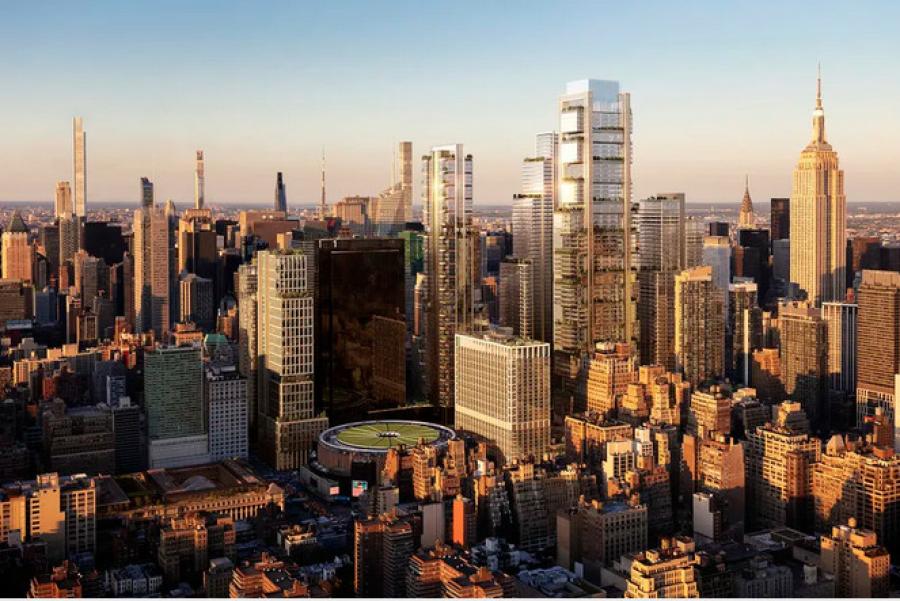 A rendering of the proposed new New York skyline via a developer linked to the Empire Station Complex proposal. (Vornado Realty Trust rendering)

New York Gov. Andrew Cuomo is trying to push through a city-changing land deal that would reshape Manhattan's skyline. And the project's detractors, until very recently, were few and relatively silent.

How is he doing it? With his still-considerable political muscle and an almost irresistible carrot: the dream of finally fixing everyone's least favorite transit hub — Penn Station.

The Empire Station Complex plan sets out to eventually overhaul the transit hub with revenue generated by a massive real estate deal in the surrounding blocks.

A key hurdle for the project, at least in the short-term, rests in the state budget negotiations as Cuomo tries to ram a $1.3 billion bond deal past some reluctant lawmakers.

The Empire Station proposal would be "generation-changing" not just for Midtown, but for all of Manhattan, said State Sen. Liz Krueger, who opposes the project and is working to remove it from this year's state budget.

The vision includes bringing 10 new large-scale buildings — housing offices, retail and residential spaces — to Midtown by 2038 in an area dubbed "The Penn District" by project developers.

At least one of the proposed towers, named PENN 15, would be comparable to the size of the Empire State Building, according to renderings by Vornado Realty Trust, the group that controls a majority of the eight sites and plans to develop the area, the state's General Project Plan revealed.

Vornado chairperson Steven Roth described Cuomo as "the master builder of our generation" in a February earnings call to investors.

All told, the 20-million-sq.-ft. project would add more space to the city than Hudson Yards' 18 million sq. ft. — and be five times as large as the never-built Amazon headquarters in Queens. One portion of the redevelopment, the Moynihan Station, opened earlier this year.

Supporters tout the project as key to the city's COVID comeback, even as the pandemic has devastated the Manhattan office market.

The Midtown project also would allow the state to use eminent domain to raze 50 buildings to make way for new tracks and capacity to be added to Penn Station in the block directly south of its current location, according to the proposal.

"This is not just a project. This is city-making. This is on such a huge scale," said Tom Wright, president of the Regional Plan Association (RPA) and member of the Empire Station Complex community advisory committee. "This is for generations to come."

All of this would be approved not through the typical city-led land use review process, but via the ESD. The Cuomo-controlled entity has the authority through the 1968 Urban Development Corporation Act to make sweeping changes to the urban landscape without city approval — if the state determines an area to be blighted.

In the Empire Station project plan, ESD found the area around Penn Station to be "significantly underutilized and characterized by blighted and substandard conditions," it wrote.

A Letter to Cuomo

The project's scope and process mirrors other controversial city projects, such as the ill-fated Amazon headquarters — a deal that circumvented city approval but dissolved two years ago amid a wave of fierce opposition.

One big bone of contention on the Amazon plan for Council Speaker Corey Johnson and other local officials was the state stomping on the Council's decision-making power over real estate development.

Johnson also recoiled when Cuomo tried to push a similar Penn Station plan in 2018, saying, "It's not fair to this city, which must be able to control its destiny." Manhattan Borough President Gale Brewer called the governor's move "a power grab."

Yet until recent days the response to the Empire Station plan has been minimal, with some local officials known for their vocal opposition to the Amazon deal staying quiet — or even signaling a willingness to play ball.

Recently, they all signed a letter to the governor urging the state to give more time and consideration to the community. The two local community boards that span the project's footprint did the same.

"We cannot have a plan for the area around Penn Station and not have a clear understanding, let alone agreement, on what happens to Penn Station," read the letter written by the elected officials to Cuomo.

Soon after, ESD pushed a public hearing on the project from March 29 to May 12.

In a letter to the elected officials April 1, the head of ESD committed to working with local lawmakers to create more opportunities for input — including a briefing on the plan and a meeting with the Metropolitan Transportation Authority (MTA).

"The ESD team will work with you on a schedule that provides multiple opportunities for public input over the coming months, in addition to weekly [Community Advisory Committee] working group meetings," said ESD President and CEO Eric Gertler in a letter obtained by The City.

‘You Need a Discussion'

Some Manhattan officials signaled that working with ESD and the governor is not off the table.

"You need a discussion. You need a little bit more time. I'm not saying that you have to stop it all," Brewer said.

Johnson is not necessarily opposed to the current plan, but stressed that more interaction with locals is needed, said a spokesperson.

"The Speaker is concerned about the limited community engagement thus far and is working with other elected officials and community members to make sure that the process is more inclusive moving forward," explained the spokesperson, Jennifer Fermino. "We can't re-imagine Penn Station and the Penn District without the community at the table."

Hoylman, who is running for Manhattan borough president, said he opposes the current plan and described its approval process as "a complete subversion of the city's authority to control its destiny." Yet he added he's worried that the pandemic has made it hard to say no to this type of deal to help revive the city.

"This is going to be the pressure on the entire borough in these years following the pandemic — that any economic development, any real estate project is good because people are desperate to look like they are investing in jobs and jumpstarting the regional economy," he said.

As lawmakers haggle over the $200 billion state budget, funding for the Empire Station is emerging as a sticking point.

The governor is "pushing hard" on lawmakers to approve bonding authority for $1.3 billion for the Empire Station, according to legislative sources.

That funding would be geared toward the railroad expansion acquisition, said an ESD official. The bond deal would show the federal government that the state is ready and willing to contribute its share toward the project, the official added.

Wright said the $1.3 billion can be viewed as "a down payment on what will probably cost a lot more."

"To my way of thinking, that was the state showing that it really [and] truly was committed to fixing Penn Station," he continued. "Anybody who works with the feds knows, [they] are going to be looking for a firm local commitment."

But legislators are balking at the measure, seeking to remove it over lack of transparency and scant details over the benefits to Penn Station.

"There's no connection between this proposal and Penn Station other than it will be 10 giant buildings, super-talls, all surrounding that specific area," Krueger said.

She added that there's "no evidence" to support the governor's proposal that revenue from the development would help fund the new tracks.

The pandemic may be partly to blame for the project flying under the radar for many New Yorkers.

Cuomo first unveiled a plan to overhaul Penn Station and the area around it in 2016. He introduced the concept for the current proposal in his 2020 State of the State address — delivered just weeks before COVID-19 arrived in New York — before state officials quietly began initial review procedures for the plan last summer.

Getting any specifics from ESD about the project over the past year has been tough, said Lowell Kern, chair of Manhattan Community Board 4.

"It was presented to us as a fait accompli. And that's not how we do business," he said. "This is a real estate development plan. That is the tail wagging the dog. This is supposed to be about redeveloping the rest of Penn Station. And there's no Penn Station in the plan."

Though the stated goal of the Empire Station proposal is to generate revenue to pay for eventual expansion and rebuilding of Penn Station, details in ESD's 23-page General Project Plan on how exactly that will happen are sparse.

The project plan also lays out a framework for the state to use the value of as-yet-unbuilt real estate to generate money to fund future improvements to Penn Station and the surrounding area.

But in a meeting with Manhattan Community Board 5 in early March, ESD officials could not answer questions about exactly how that would happen.

The document acknowledges that "substantial improvements to the existing Penn Station" will be outlined in an as-yet-uncompleted overall plan created at some point by the Metropolitan Transit Authority (MTA), Amtrak and New Jersey Transit — all three agencies that have jurisdiction over pieces of the rail hub.

Community Board 5 member Layla Law-Gisiko, a vocal critic of the project, said having a comprehensive plan — and getting all the stakeholders involved together to hammer out the details — "may be painful," but is the only way forward.

"You're not going to find one person on earth telling you that Penn Station is fine the way it is," she said. "It's easy to get people to buy into, you know, ‘We need to fix Penn Station.' But then the question becomes, how do you fix Penn Station?"

For her, the specifics are critical, especially on the site of the old Penn Station, a jewel of the city that galvanized preservationists and planners when it was torn down beginning in 1963.

"We are in this situation because in the 1960s, some stupid decision was made to demolish Penn Station and just throw it in the marsh in Secaucus," she said, referring to parts of the famous building that were dumped in the Meadowlands of New Jersey.

"If we let that go, it's going to repeat itself."