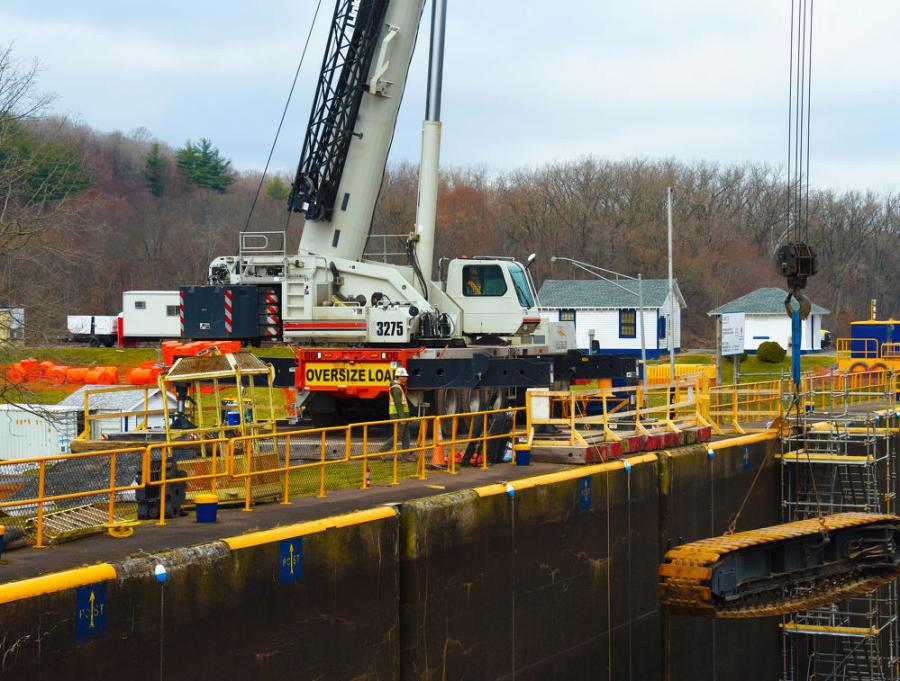 Crews took the crane apart in pieces out of the lock chamber, simplifying things.

As the saying goes, "It takes a village."

According to David Perry, D.A. Collins project manager for the construction site, "This particular project was located at Lock E7 along the Erie Canal. The canal stretches from Albany to Buffalo and then from Albany to Lake Champlain. To get from Albany to Buffalo, there's a certain increase in elevation. So, a boat would travel into the lock chamber, which has lock gates up and down stream. Once you go inside the lock chamber, the water elevation can be raised and will get the boats to the upstream side of the dam or to the next highest point along the river. There are four gates on a lock. This particular one has two upstream and two downstream up the lock. They're big doors that allow boats to come in and out and then close to a center point once the boats are inside."

The Erie Canal is typically open from May until late November or early December. It allows boating and community traffic, barges and tug boats to go along the canal system during decent weather between those months. A majority of the repair work to the waterways must be done in the winter when the system is closed. 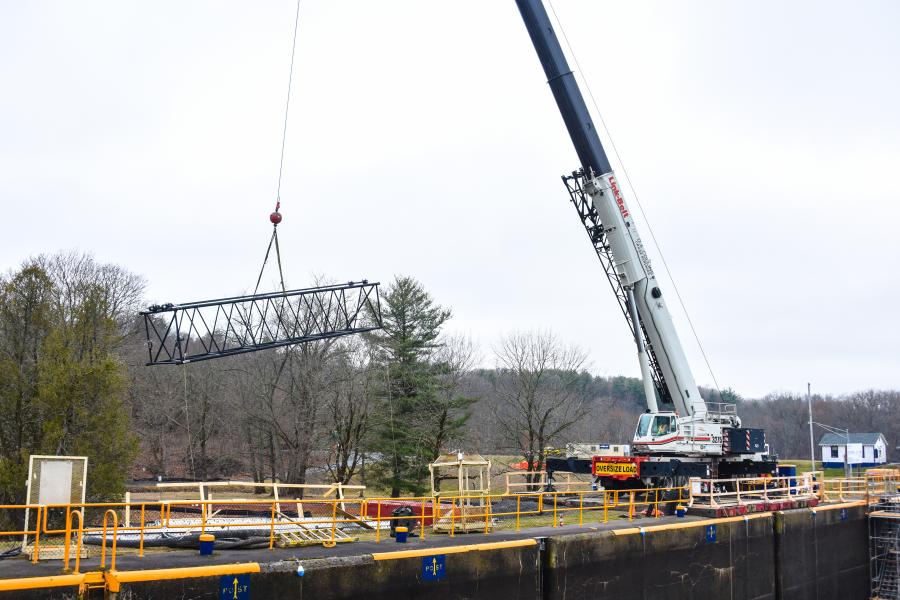 "There was trouble with one of their lower lock gates," Perry said. "The steel gate is basically 23 feet wide by 50 feet tall. The gate couldn't be opened or closed by the machinery because it had settled for some unknown reason. Since it was underwater, you couldn't see it."

D.A. Collins was called to assist with addressing the situation. Because there was still water on the upstream and downstream sides of the lock, a cofferdam was installed. A cofferdam is an enclosure built within a body of water to allow the enclosed area to be pumped out. The pumping creates a dry working environment so the work can be carried out safely. Cofferdams are commonly used for construction or repair of permanent dams, oil platforms, bridge piers within or over water.

Pumps were installed inside the lock to look at what the problem was in a dewatered condition. The gate sat on a pivot point that had some undermining and it rotated. The gates settled and it couldn't be opened or manipulated.

"The gate structure itself weighs 53 tons and is heavy and tall. In order to get at the lock gate to lift it, there's a lot of sloping terrain, making it difficult to get at from an access point. A crane can't just drive in there and easily hook on to it. D.A. Collins used their Link Belt 275-ton rubber tire all-terrain crane. The crane was mobilized to the site and then we mobilized a Link Belt 248, which is our 200-ton crawler crane. Next, we used the 275-ton crane. We put it together in pieces in the lock chamber."

The crew was able to walk the crawler crane in the lock chamber to the gate that had settled. They lifted the structure and were able to lay it flat down inside the lock so the gate could be repaired and improvements and maintenance could be done. Next, they repaired the damaged pivot; put it back where it needed to be; finished up some additional repairs on the gate; and then lifted the gate back up with the crane. The workers hooked up all the machinery to it and got it operational. Later, they reversed the process. They took the crane apart in pieces out of the lock chamber, simplifying things.

"It took two days for our nine-man crew to remove the crane completely from the lock chamber," said Frank Staley, site superintendent of D.A. Collins. "It was disassembled in pieces. The larger one sat on top of the lock chamber while the crew disassembled the crane that set the gates down inside the chamber. Lifting out the crane from down inside the lock was one of the final steps. Once the equipment was demobilized, the project is complete. Now that our major work is done, we'll send the 200-ton to other projects in New York. The 275 is going to another job in Gansevoort, N.Y. We've also been doing a lot of work down at the lock this year. Some major work needed to be done. It was more work than anticipated. but that's OK."

Perry had nothing but praise for a job well done.

"A lot of talented individuals made this come about. They were involved with this project at the D.A. Collins level and helped make it happen. There were many moves and coordination. A lot of trucking because the crane has six to seven parts. Multiple pieces of equipment needed to be mobilized and various crews worked on it together to complete the project."

In spite of the threat of 45 mph winds, Staley calls it a win-win. "We're all here safe and sound. The sun is shining. Life is good." CEG