Stokes has been around the construction industry for 30 years. 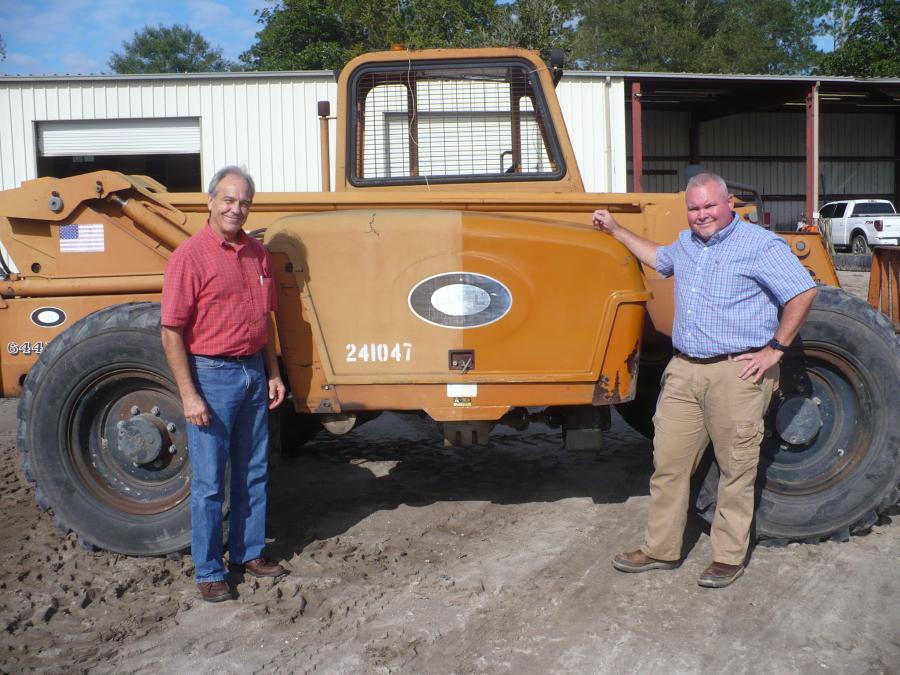 Craig Morris and Mike Stokes show off a Lull that has been partially redone with Dakota Shine.

Snake oil that works — that’s how Michael Stokes, president of Tim-Prep Inc. of Jacksonville, Fla., owner of Bobcat of Jacksonville and the originator of Dakota Southeast, describes the Dakota Shine products that fix faded paint. His new company will distribute throughout the southeast.

Stokes has been around the construction industry for 30 years. He founded Tim-Prep in 1985 as a site preparation company for the timber industry.

“In the 1980s, our main focus was building and maintaining logging roads and site prep for reforestation which we still do today. From there we started performing all phases of civil construction for developers of residential, commercial and industrial in the early 1990s. In 2009, we had the opportunity to start a new Bobcat dealership, Bobcat of Jacksonville. With that, we have grown into several new lines including Doosan, Wacker Neuson and Dynapac [Atlas Copco] compacting equipment.”

“Six years ago we bought a large John Deere tractor to pull pans for our construction business,” said Stokes. “The hood was really faded and I remembered seeing an ad for Dakota Shine, we tried it, and it turned out great. We had about five or six gallons left and it just sat on a shelf in our shop throughout the down times. We didn’t spend any money we didn’t have to.

“About six months ago we bought four more ag tractors to pull pans and they were really faded. Before we sent them to the job we decided why not try that product we tried six years ago and see if it was still good. Some of the product was so old we went to the Dakota Shine Web site to see how to use it and we started to apply it. Before we got too much in to the application we called the factory to make sure we were doing it right. After about a 45 minute conversation with Lynn Odland of Dakota Shine, we developed a relationship. He explained how to use the product, we used it, and were sold on it. We were so sold on it we started thinking about doing more with it. I started out thinking we would use it in our Bobcat dealership but the more Lynn and I talked about it we toyed with the idea of us becoming a distributor. There is a need to have it readily available in the southeast instead of having to wait three or four days to get it out of the Dakotas. So we set up Dakota Southeast to handle distribution in ten southeastern states.”

The quick access of the product will make Dakota Shine a value added product to the dealers and customers that have faded equipment in the SE.

Dakota SE has the full support of Dakota Shine Corporate for this venture.

Stokes knew that with all of his other business interests he would not have time to run Dakota Southeast himself so he went looking for someone take over and run the operation.

“I have known Craig Morris for a number of years since he was my sales rep for an equipment dealership and we have remained friends. I called Craig because I thought this was the perfect guy for selling Dakota Shine,” said Stokes.

Morris has been around construction equipment a long time.

“I started in 1983 on the wash rack for Linder Machinery,” said Morris, “and worked through the various departments and finally got a sales territory in Jacksonville. I spent over 26 years with them. Knowing equipment as well as I do I am excited about the Dakota Shine product. I know what it does for equipment in the rental business and know the value of sending equipment out that looks good. It also brings a lot of value to machines that are going to be sold and there is real value to a contractor who either buys a piece of used equipment or has an older piece and wants it to look better on his job site.”

“The value I see in Dakota Shine for equipment that is being taken to an auction is that it does not hide the faults of the machine,” said Stokes. “As a buyer of used equipment I would much rather buy a piece of equipment that has been shot with Dakota Shine than had what we call a ‘Mary Carter overhaul’ which is a repainting. The hoses will not be black anymore but yellow. You know that the machine has been repainted and you wonder what all is hidden under that paint. With Dakota Shine we have the same black hoses, the same shiny fittings, and you are not wondering what is hidden under the paint. For our Bobcat dealership when someone looks at a used machine that has Dakota Shine he doesn’t have to wonder what is hidden under a new paint job.”

Dakota Shine is the only product of its kind that has been through the testing of most of the top OEM’s in the construction world and passed worldwide, along with most of the major rental Companies. It also has proven itself with most of the top auction companies. Looks sells and makes a customer feel better when a contractor shows up with nice looking equipment.

Dakota Southeast is not in the application business but will recommend applicators to a customer. They are however searching for applicators throughout the Southeast and also dealers that can offer Dakota Shine to their customers and contractors. If a contractor or dealer wants to do the job himself it is a very simple process to apply.

According to Morris, “About a five minute training session watching the training videos on our Web site is all you need to apply it properly. If you will follow the steps in the video it is a very simple process and there are written instructions as well. Another advantage is that this is not a clear coat. It actually restores the faded and oxidized pigments back to their original color. It doesn’t flake or scratch off unless it is applied improperly. We have machines it has been on for six months and have not seen any deterioration. Machines we have put on the job site look very good after six months of use.”

Some have lasted for years. Dakota Shine is no better than paint but adds value at a very reasonable cost and effort.

According to Stokes, “Our biggest challenge is getting past the ‘snake oil’ mentality of potential buyers and dealers. They have seen the ‘miracle’ clear coat kits on television that are short term fixes and they think this is the same thing. If they will take the time to look at Dakota Shine, they will see that this really rejuvenates the paint, not just coats it. Generally they can expect this to last as long as the original paint lasted. It all depends on how the equipment is taken care of. It can also be reapplied later in its life if needed.”

A couple hundred dollars and a few hours of labor can add a lot of value to equipment.

Dakota Southeast will handle sales in ten southeastern states. The company has a warehouse in Jacksonville, Fla., where customers can order directly from the Web site and get it shipped, usually with same day service. For more information, visit www.fixfadedpaint.com or call 844/349-3233.