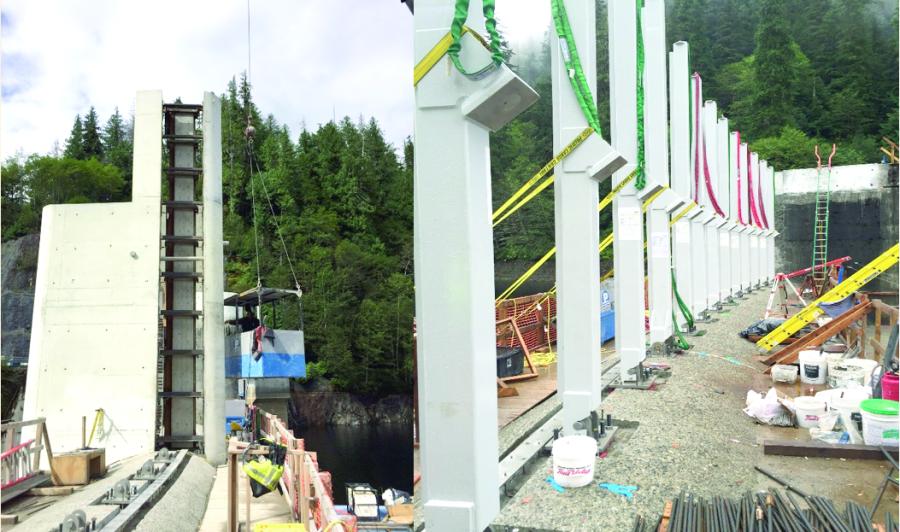 In May 2016, the Southeast Alaska Power Agency (SEAPA) embarked on an expansion of the Swan Lake Reservoir — a hydroelectric plant located on Revillagigedo Island at the head of Carroll Inlet, about 22 mi. (35.4 km) northeast of Ketchikan.

The plant was originally conceived in 1980 by the city of Ketchikan. Near the end of project construction, the state of Alaska, under the department of the Alaska Energy Authority, assumed ownership and began commercial operation in June 1984. Ownership transferred from the state to the Four Dam Pool Power Agency (FDPPA) in 2002, and SEAPA assumed ownership when the FDPPA was restructured in 2009. SEAPA is a not-for-profit Joint Action Agency of the State of Alaska that supplies wholesale power to the municipal utilities of Petersburg, Wrangell and Ketchikan over 175 mi. (281.6 km) of transmission system.

The Swan Lake Reservoir Expansion Project consists of a concrete arch dam — 174 ft. (53 km) high and 430 ft. (131 km) long at its crest — located approximately .75 mi. (1.2 km) downstream from the mouth of the original Swan Lake outlet. The current maximum reservoir storage capacity is 86,000 acre-ft., spilling an average of 35,000 acre-ft. of water annually. The project will increase capacity by 25 percent. Additionally, a new 33-ft. (10 m) pier is being built to support the 23-ft. (7 m) wheel, along with extensions on the north and south piers.

The reservoir consists of a power tunnel that is 2,200 ft. (670.5 m) long and 11 ft. (3.3 m) in diameter, leading from the intake structure down to the powerhouse. There are two Francis style hydro turbines with a total rated capacity of 22,000 kW. The project output in 2011 was 91,584 MWhrs. Development of the SEAPA Swan Lake Expansion Project is critical to southern Southeast Alaska's continued economic sustainability as it will provide the region with increased regional hydroelectric storage capacity.

The proposed cost estimate of $13.3 million for the project was partially funded when the Agency received a direct legislative appropriation of $3.9 million from the state of Alaska. Following that appropriation the Agency was able to sell bonds for additional financing. The combination of low bond rates, debt restructuring and a partial state grant will all contribute to the completion of the project without a rate increase to the Agency's Member Communities. The project was anticipated to be complete prior to the end of calendar year 2016.

“The warm winter put the project about two weeks behind with heavy rainfall causing spilling the first week of the project,” explained Ed Schofield, SEAPA power systems specialist. “Crews installed a five megawatt load bank to pull water down in order to get the project started, and continued to use the load bank into July.”

“The biggest challenge has been managing the lake level to keep the crane [which is floating on a barge] in the correct position. The lake needs to be between 310 ft. and 320 ft. for the crane to properly place construction materials,” noted Schofield.

The lake level was low this summer and continued to be lower than average this fall. CEG