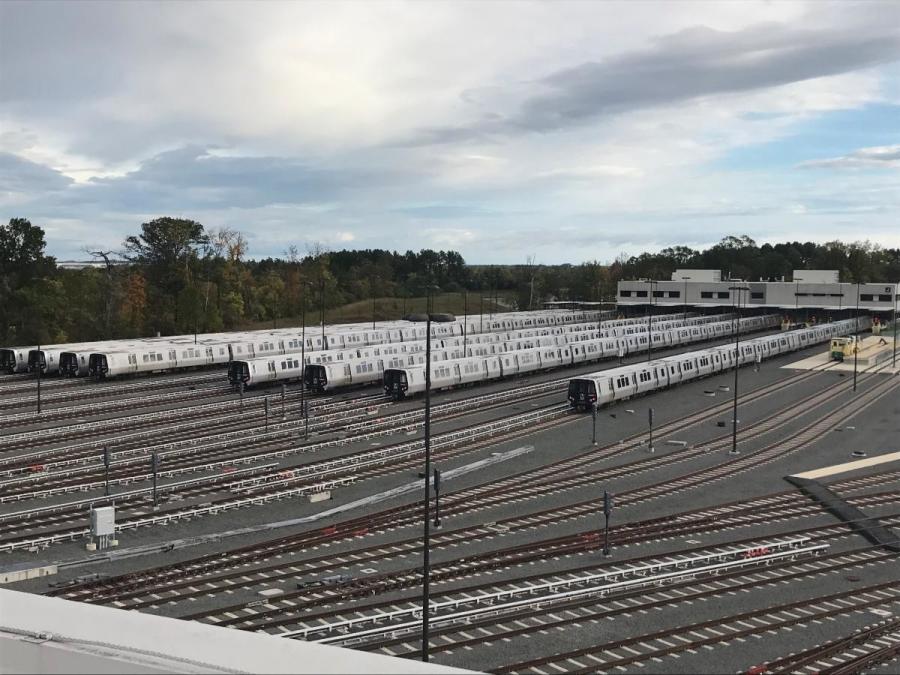 Contractors on the multibillion Silver Line Extension of Washington, D.C.'s Metrorail service to the western Virginia suburbs and Dulles International Airport have finally completed the last substantial element of the project, officials announced Dec. 1, clearing the way for passenger service to likely begin in 2022.

The end of construction on the rail yard, the last major hurdle for a project that has been plagued by delays, is a milestone in the decades-long effort to extend Metrorail service from Washington to Dulles and into Loudoun County, Va., the Washington Post noted.

The announcement from the Metropolitan Washington Airports Authority (MWAA), which is overseeing construction of the rail line, clears the way for Metro to begin the evaluations needed before the Silver Line can begin carrying passengers.

The MWAA's statement also came less than a month after it declared that work on the other major component of the Phase 2 extension, the 11.5-mi. rail line, was largely finished as well.

"The completion of the rail yard and maintenance facility is critical to completing the Metrorail Silver Line to Dulles Airport and beyond," said John E. Potter, MWAA's president and chief executive, in the statement. "We are now one step closer to making that happen."

The first phase of the Silver Line opened in July 2014 with five stations in northern Virginia — four in Tysons and one in Reston. The second phase will have six stops — three in Fairfax County and three in Loudoun County — including the station at Dulles.

Metro previously estimated it could take five months of testing and other preparations before passenger service could begin. The Washington Metrorail Safety Commission, which is responsible for safety oversight of the rail system, also must verify that Metro has followed its safety certification process.

It will be up to Metro to determine when passenger service on the line will begin. It did not indicate in its news release when passengers might be able to board at the six new stations, but the Post reported that earlier timelines laid out by the agency would indicate service could begin in the first half of 2022.

"In the coming days and weeks, we will work closely with MWAA as we begin extensive testing to ensure the extension can be safely operated and all other parts of the project are accepted by our board," Metro said in the announcement. "This process will determine when service can begin."

Virginia Democratic Rep. Gerald E. Connolly, who as chairperson of the Fairfax County board of supervisors helped lead the push to extend Metrorail service to Dulles Airport, said the end of major construction on the project brings the region "another step closer to realizing that ambitious goal."

When it opens for service, the extension will bring the rail system to fast-growing Loudoun County for the first time. County Supervisor Matthew F. Letourneau (R-Dulles), who also serves as a Virginia representative on Metro's board, called the announcement an "important milestone."

"There's still a little way to go, but it's good news," he said.

The rail yard and maintenance facility were built by Hensel Phelps on 90 acres of airport property along Old Ox Road and will provide storage for 184 rail cars. Officials at the Colorado-based general contractor declined to comment to the Post on MWAA's announcement.

MWAA is overseeing construction of the project, which eventually will be passed on to Metro. The transit agency will manage and operate the rail line.

The total cost of the first and second phases is estimated to be about $5.8 billion. Fairfax and Loudoun counties, as well as MWAA, the state of Virginia and the federal government, are helping to pay for the project, but most of the bill is being paid by Dulles Toll Road users.

Much like the extension of the Silver Line, the project's first phase, built by Reston-based Bechtel, one of the largest construction companies in the United States, also was dogged by construction issues. It opened in July 2014, six months behind schedule and more than $220 million over budget.

Construction on the second phase began that same year and officials had hoped it would be completed by mid-2018. Work on the rail yard was also expected to be finished by December that year.

But the second phase quickly ran into problems, the Post reported. MWAA's decision to incorporate new requirements for storm water management delayed the rail portion of the project by 13 months and added at least $137 million to the cost.

Several deficiencies also were found at the rail yard, including cracks in concrete panels and platforms that had to be rebuilt because they were the wrong dimensions.

In total, delays have added more than $300 million to the cost of the Silver Line's second phase, which is expected to be covered by a $500 million contingency fund.