DDI Will Be Erected on Interstate 35 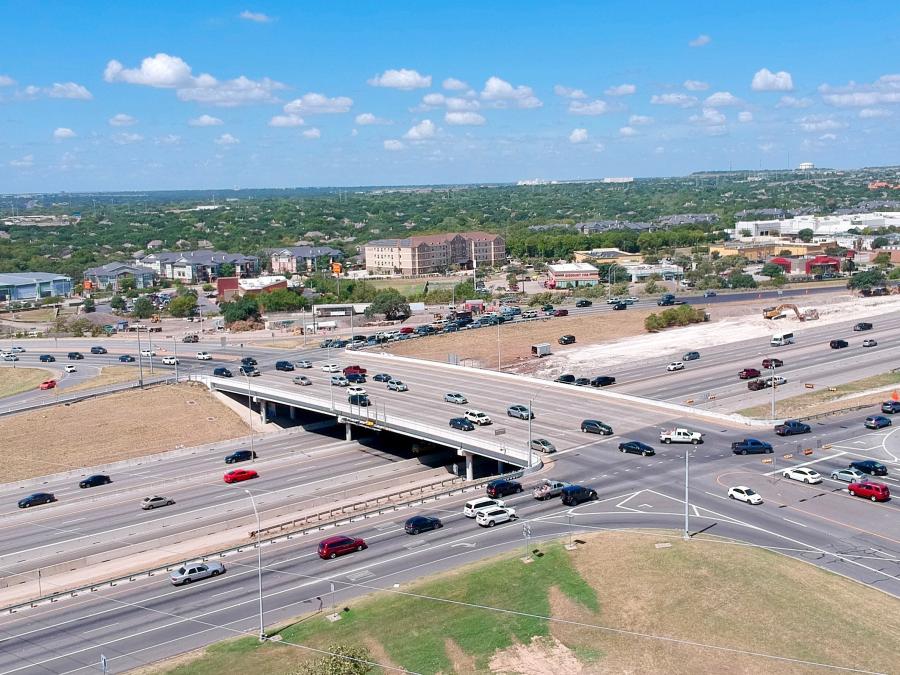 Officials ceremonially shoveled dirt in Austin last July to launch the latest rendition of an interchange design called a "diverging diamond interchange." Commonly referred to as a DDI, the design is a relatively new wrinkle in highway architecture. It continues to find favor in the United States for the simple reason that it moves traffic safely.

The design is being employed in Austin to ease traffic through a chokepoint on Interstate 35 where it angles north-south through the Texas capital and intersects with Parmer Lane. The local road otherwise is known as farm-to-market Highway 734. It's a busy road. At its junction with the interstate, Parmer Lane experiences 111,000 vehicles every day, some 64,000 of them west of the I-35 intersection, another 47,000 east of it.

Meanwhile, 182,000 vehicles pass below the Parmer Lane overpass every 24 hours, filling the interstate's three lanes in each direction. While most of the I-35 traffic rolls on by, some of it exits onto Parmer Lane. Hundreds of other drivers make a left turn from Parmer Lane in the course of a day and drop down onto the interstate.

The result of all this is lots of idling engines as drivers wait to turn left onto Parmer or to cross the overpass and turn left onto the interstate. All this left-turning adds up to congestion and high-risk movement. A National Highway Traffic Safety Administration a decade ago statistically showed that left-hand turns are 20 times more dangerous than right-hand turns. And high-traffic intersections like Parmer Lane and I-35 can only get worse.

Some cautionary statistics: Austin constitutes the 11th-largest urban population in the United States with an estimated one million people. It's been designated the fastest-growing large city in the country, adding some 200,000 residents just since 2010. Of the 8 million vehicles registered in Texas, Parmer Lane commuters see their fair share every day.

The project carries a $24 million price tag, only a small portion of which will be spent on the overpass structure itself. Rather, the bulk of funding will create new roadbed and pavement for Parmer Lane traffic as well as build parallel bypass lanes running alongside I-35. General contractor James Construction Group began the project last August by first dozing dirt for those bypass lanes. 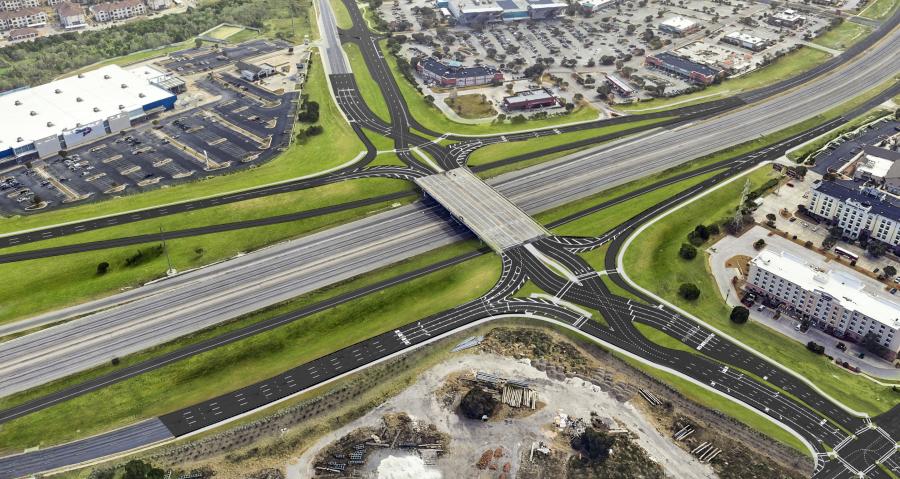 The northbound bypass — technically termed a collector-distributor road — is only being reconstructed, but the identical roadway for southbound traffic is new construction. The two lanes will help reduce traffic at the intersection by letting exiting interstate travelers pass under the overpass and merge with motorists on a frontage road on the other side. In other words, they won't have to stop for a traffic light at the top of the off ramp. Besides improving the flow of moving vehicles, the collector-distributor roadways also enhance safety by separating high-speed interstate travelers from drivers slowing down to exit the roadway.

The more interesting work will be topside on Parmer Lane where the roadway's traditional 90-degree encounter with the bridge overpass is being altered. Roadways on either side of the bridge soon will approach at an acute angle. Each set of lanes will angle across the bridge and take over the structure's left side. After crossing over, vehicles in the inner lane will flow seamlessly and without oncoming traffic into a left turn leading to the interstate and vehicles in the outer lane will shift back over to the right side and continue ahead.

Stoplights will be synchronized so that traffic on one end of the bridge is in motion while traffic across the bridge awaits its turn. Though the resulting weaving pattern of lanes sounds tricky, it has proven intuitive and safe for drivers. It has dramatically reduced or eliminated traffic accidents associated with left turns. The first DDI constructed in the United States — in Springfield, Mo., in 2009 — lessened congestion and delivered 46 percent fewer accidents. Subsequent DDI installations have done the same.

Earthmoving to create roadbeds for the new angled crossovers constitutes most of the early-stage heavy equipment work at Parmer Lane. The bridge eventually will be widened at each corner to allow for the new turning radiuses incorporated into the DDI model, but the structure otherwise will not be changed.

Since construction of the first DDI in 2009, 111 more DDI intersections have been built in the United States. Only a dozen exist elsewhere in the world, including two pioneering ones in France that were built in the 1970s. The I-35 at Parmer Lane DDI is one of five such intersections planned or under construction in Texas. It's funded by a Texas Department of Transportation funding initiative and by the federally mandated Capital Area Metropolitan Planning Organization.

Expectations of success are high. An analysis of the DDI prior to the start of construction on Parmer Lane predicted that drivers will be happy with the new traffic pattern. The analysts looked ahead 20 years and determined what traffic at the intersection would look like — with the new configuration and without it. Their conclusion: Due to the DDI, drivers in peak traffic hours in 2040 will be 97 percent less likely to sit through multiple stoplight cycles at the intersection.

"The I-35 at Parmer Lane project is part of the Texas Clear Lanes relief initiative, which is designed to remedy congestion at some of our biggest choke points around the state," says J. Bruce Bugg Jr., chairman of the Texas Transportation Commission.

A 2017 American Transportation Research Institute study highlights the bottleneck character of the Austin segment of the interstate. In the national study, truckers who were polled declared the I-35 portion in Austin was the 28th worst bottleneck in the country, with one section of the roadway typically traffic-clogged six hours a day.

No one can blame the truckers for the congestion either. Long-haul trucks typically make up a miniscule portion of the interstate traffic, according to a Texas A&M study. Only 14 percent of I-35 traffic in 2015 was found to be through-traffic, entering the city and leaving it without entering a city street. Of that volume, just one percent consisted of big rigs. All of which means that 86 percent of the interstate traffic in Austin is local drivers going from Point A to Point B within the city. The interstate is just another cross-town freeway.

So far, DDI construction activity at the intersection has minimally disrupted daily traffic. "There have as yet been no permanent lane closures, only occasional, temporary closures to complete some work," says DOT public information officer Bradley Wheelis. Which means the worse is yet to come but, ultimately, so is the best.

At the six-month mark, the project has not experienced any design hiccups, according to Wheelis. It's on schedule for completion in another 18 months.