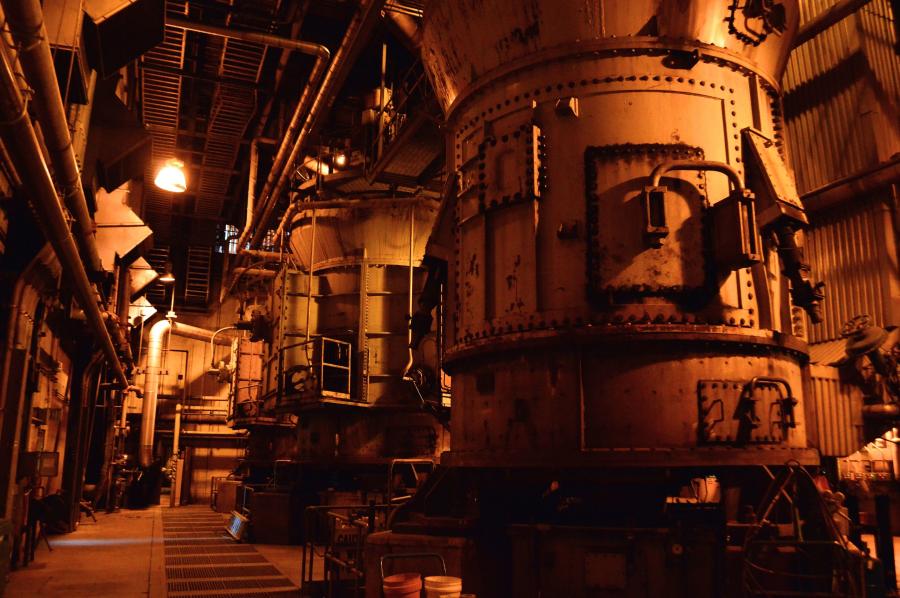 Large cylinders in which coal is ground in preparation for burning in the main chamber of the Boardman Coal Plant.

Portland General Electric's agreement to close its only coal-fired power plant won praise seven years ago as an environmental victory with national implications in the fight against air pollution and climate change.

As the 2020 closure date approaches, though, those good feelings have largely evaporated. The coalition of environmentalists, ratepayer advocates and industry groups that once cheered PGE's decision are now preparing for a showdown instead.

They suggest the utility, in deciding how to replace the Boardman plant's power, is stacking the deck in favor of two new gas plants it wants to build at the coal plant site, about 150 mi. (241.4 km) east of Portland. A series of decisions by the utility and state regulators later this year will determine the direction of PGE's future power supply and its mix of green energy and fossil fuels.

In comments to state regulators, a variety of stakeholders will argue that PGE is rushing into a gas-heavy future that might be good for its shareholders, but is risky for ratepayers and nearly as bad for the planet as coal.

“Right now, it looks like a shell game,” said Amy Hojnowski, senior representative for the Sierra Club's Beyond Coal Campaign. “They're manipulating the process to get the outcome they want, which is a self-built expansion of their existing gas infrastructure at the Boardman site.”

PGE said that's nonsense. It said it's keeping an open mind about resource choices and will let the market decide who can provide the cheapest, lowest-risk power to meet its customers needs in a competitive bidding process. But, bottom line, it said it needs to keep the lights on, and can't do that with renewables alone, a point reinforced during the recent cold snap, when the wind wasn't blowing and solar panels around the state were covered in snow.

“We're not putting our thumbs on the scale for any particular technology or fuel,” said Brett Sims, PGE's director of resource strategy. “In the end, we don't know what will bid in, but we believe there are resources beyond new gas plants.”

The rush to gas is on nationally and could accelerate under a Trump administration loaded with fossil fuel advocates and promising to unleash a new wave of drilling. Utilities around the country are already building or planning scores of new gas-fired power plants and pipelines as they close older coal units, take advantage of historically low gas prices, and add more renewable resources that require backup.

At first glance, that's a climate win: gas-fired power plants emit about half the carbon dioxide as an equivalent one powered by coal. But the new plants will still generate considerable carbon dioxide for decades. Moreover, the main component of natural gas is methane, a far more potent greenhouse gas in the short run.

Trump's energy plan, posted on the White House website, said he was committed to rolling back Barack Obama's Climate Action Plan, which had aimed to reduce methane leakage from the oil and gas industries by 45 percent by 2025.

Gas-fired electricity already makes up a quarter of PGE's energy supply today. It just opened a 440-megawatt gas plant at the Boardman site this summer. The previous year it opened Port Westward II, a dozen small gas-fired engines in Clatskanie that can flexibly incorporate renewable resources.

In November, PGE unveiled its newest plan for meeting customer demand. The study forecast a power supply shortfall of more than 800 megawatts by 2021, about what it takes to power 800,000 homes.

It's a big hole, mostly the result of the coal plant closure. PGE looked at different combinations of replacement resources, then scored them according to how they would fare under varying fuel price, carbon cost and demand growth scenarios.

PGE's “preferred” option didn't specify the technology or fuel type, but identified two big energy needs, the vast majority from a reliable resource that isn't subject to the weather. Apart from hydroelectricity, which may not be available in the quantity PGE needs, or coal, that generally means natural gas.

A smaller component of the identified need was renewable energy, likely from wind farms on the Columbia Plateau or in Montana.

A variety of stakeholders didn't like that result. Some complain PGE's action plan isn't specific enough, and that its scoring methodology was skewed to favor the gas plants it wants to build.

PGE denies that. It said it is trying to offer maximum flexibility and will consider all resource types that meet its criteria. It also said most of the metrics it used are industry standards and required by the state's Public Utility Commission.

“It's not dreamt up by PGE or opaque,” Sims said.

Renewables advocates noted that PGE could have chosen another mix. The top options, including one with far more wind energy and less gas, scored within a few points of one another on a 100-point scale. They all met the utility's reliability standard.

“The technologies that exist today are good enough to do the job, said Rachel Shimshak, executive director of Renewable Northwest. “You just have to have a utility that's focused on fitting them all together.”

Tyler Pepple, a lawyer for the Industrial Customers of Northwest Utilities, contends PGE doesn't need to add another wind or solar farm until 2028 or 2030, and can comply with the state's increasingly rigorous renewable energy mandates by drawing down the massive bank of renewable energy credits it has built up. In the meantime, renewable energy costs will fall, making compliance cheaper in 2030 and 2040.

PGE said that's not a responsible strategy. Franco Albi, manager of the utility's integrated resource plan, said the early acquisition of renewables also allows it to take advantage of the federal production tax credit, which is set to expire for wind farms.

“Every scenario we ran indicates that early action on renewables is the prudent thing to do,” Albi said.

Residential ratepayer advocates also support a wait-and-see strategy. Bob Jenks, executive director of the Citizens Utility Board, said he thinks PGE ought to be pursuing five- and 10-year hydroelectric contracts and putting off any big new investments in gas that will lock the company into fossil fuels for four decades.

Sims said PGE isn't opposed to some new hydro contracts, and will see whether the Bonneville Power Administration or other big hydroelectric suppliers offer any capacity in the company's competitive bidding process. PGE is hoping regulators will give the nod to its action plan sometime this spring so it can get going on that process.

And that's where the critics point to more problems.

Sims said it's standard practice to overbuild pipelines and substations to provide flexibility for future expansion. He said the transmission purchases were not specifically geared to new gas plants at Boardman, and that it's wise for the utility to start permitting the gas plants in case that is the best option in the competitive bidding.

“We can't rely on hoping that there will be all this good stuff out there when we need it in 2021,” Sims said.

Regulators acknowledge there's an inherent bias for utilities to choose their own projects. That's how they make money and drive their stock prices.

There also are risks to utilities owning all their own generation plants. Ratepayers are footing the bill for the early closure of both the Trojan nuclear plant and the coal plant in Boardman, for example. And when the parent company of the contractor building the new gas plant at Boardman went bankrupt last year, PGE had to step in and finish it, picking up about $150 million in cost overruns. If insurers don't pay, ratepayers could get stuck with those costs, too.

Since 2006, the state has required utilities to put all its resource acquisitions out for competitive bidding. But almost all those contests have been won by the utility, or a contractor building a plant for the utility. The Public Utility Commission was scheduled to start an investigation of its competitive bidding guidelines in order to encourage more diverse ownership of those resources, but the kickoff meeting got postponed.

“We call it the death march,” said Kahn. “Since the guidelines have been adopted 95 percent of the resources have been self-built or bought [by the utilities]. Our members have secured 5 percent.”