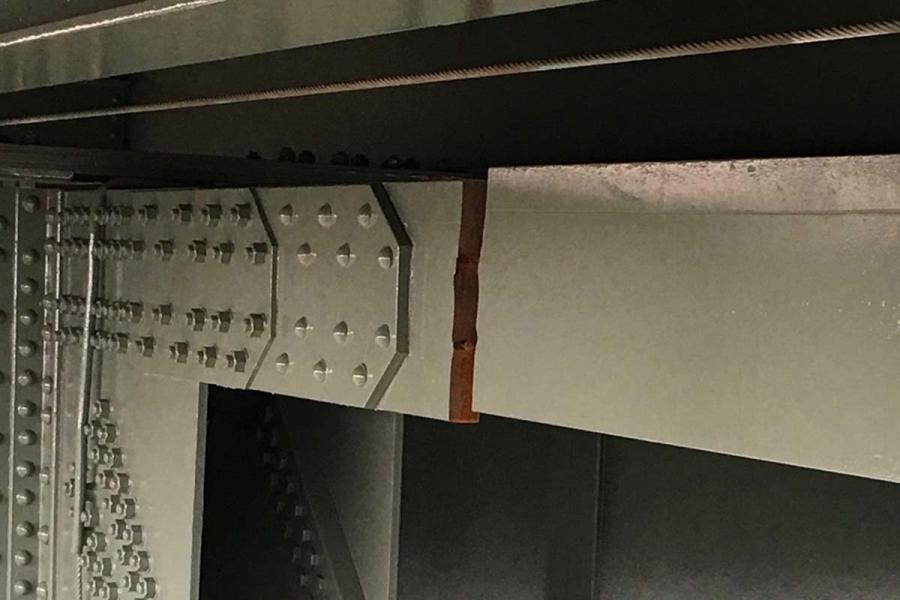 (PA TURNPIKE COMMISSION) The complete fracture occurred on a 14-inch truss member beneath the deck, or driving surface, of the Delaware River Turnpike Bridge. The affected truss member is located just below the westbound right lane of I-276 on the west shore.

An apparent construction error six decades ago could have caused the fracture discovered Friday in a steel beam that forced the closure of the Delaware River Bridge, an engineering expert who viewed pictures of the cracked truss said Sunday.

An image of the cracked truss - a supporting piece - on the bridge that runs between Bucks County in Pennsylvania and Burlington County in New Jersey shows signs of holes that had been mistakenly drilled into the steel beam and then filled with plug welds, a typical solution in the 1950s when the bridge was built, said Karl Frank, professor emeritus of engineering at the University of Texas at Austin. His areas of study include fractures and fatigues in metal structures and welded and bolted joints, according to the university website.

The image is on the website of the Pennsylvania Turnpike Commission, and Frank viewed it there.

"What we do nowadays, we don't do that," he said. "If you have a misdrilled hole, you would just put a bolt in and tighten it up. The problem is they welded it up."

The plug welds created a weak point, Frank said, and the stress of traffic crossing the bridge continuously since it opened in 1956 could have led to a sudden crack, splitting the beam at the welds.

A spokesman for the commission, which operates the 1.2-mile-long bridge jointly with the New Jersey Turnpike Authority, did not dispute Frank's conclusion, but said turnpike engineers had too little information to confirm anything about the crack's cause.