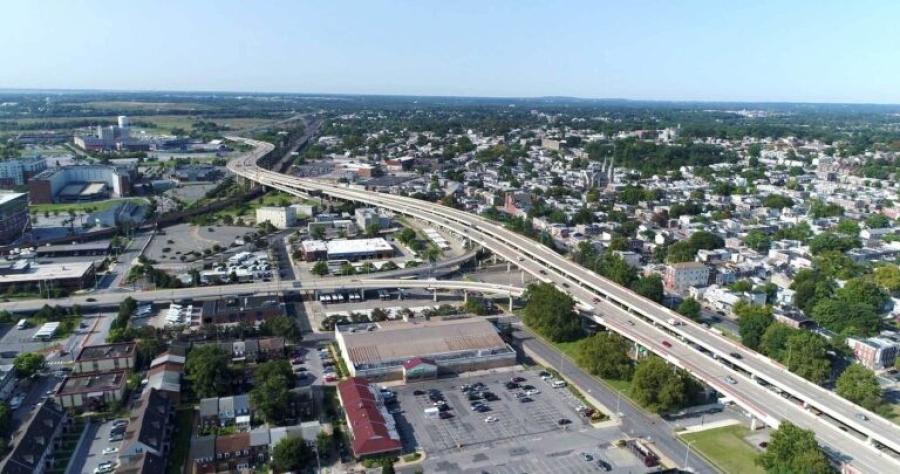 A 4-mi. stretch of I-95, seen here looking south through the city of Wilmington. (DelDOT photo)

Residents of Wilmington, Del., carried a healthy dose of skepticism into the first public input workshop Nov. 17 on what capping a segment of Interstate 95 would look like.

The idea of taking a six-block stretch of the high-speed, multilane freeway that slices through Delaware's largest city and turning it into greenspace was met with a warm reception during the first community meeting hosted by the Wilmington Area Planning Council (WILMAPCO).

But how much the project would cost — and who would maintain the space upon the construction's completion — remained sticking points for many of the attendees of public meeting, the first of four that will seek to gather residents' input on how the project should look and what it could offer.

"Are we going to be paying for this as taxpayers?" one woman asked during the gathering at Trinity Episcopal Church on North Adams Street in Wilmington, which borders the interstate.

"Who would be in charge of maintenance?" inquired another person.

The News Journal in Wilmington reported that those questions and others will be examined in the feasibility study and concept design for the project, which is being led by WILMAPCO in partnership with city administration and the Delaware Department of Transportation (DelDOT).

According to the news source, the study will examine a six-block, 12-acre segment of I-95 between Delaware Avenue and Sixth Street, but design and engineer officials said at the November meeting that how expansive the project becomes will depend on community input and financial resources.

Based on public input, a design concept will include estimated construction and maintenance costs, as well as possible funding sources.

This first step was funded through DelDOT and WILMAPCO, but additional financial resources for final design and engineering as well as construction would need to be identified, the Wilmington newspaper reported.

"Keep in mind, our clients are the entities that can make this happen," said Mary Margaret Jones, design lead of Hargreaves Jones, the New York-based consultant team hired for the initial study and concept design. "We'll make sure to consider not just construction costs, but operation costs as well."

Hargreaves Jones is working with the city of Philadelphia on its own capping of I-95 at Penn's Landing. While construction on that project was stalled due to the pandemic, funding has already been secured for the $225 million plan and includes a mix of federal, state and local government along with support from philanthropic organizations.

Wilmington residents have for years been told that capping a portion of I-95 would not be financially feasible, including as recent as 2018, when the idea was proposed by a city resident during a DelDOT meeting to discuss the community impacts of the massive I-95 reconstruction project that began this year.

When I-95 was built through Delaware more than 50 years ago, it eliminated homes and isolated the communities that remained. Churches, theaters and businesses also disappeared to make way for the freeway. In turn, Wilmington saw its population drop by more than 25,000 over the next three decades while nearby cities grew.

At the November public meeting, several city residents said that the federal government's role in those impacts necessitate its involvement in any project proposal for Wilmington.

Delaware lawmakers and Wilmington City Council members have urged President Biden to consider turning the site into a national park, which would help fund the project and potentially offer an entity that would be responsible for the greenspace's operations and maintenance.

The News Journal noted that the city and its partners also could tap into the recently approved federal infrastructure funding. Included in the bill is $1 billion for reconnecting communities, a goal in capping a segment of I-95, but it is far less than the $20 billion initially proposed by the president.

Local officials are expected to compete for the funding in a grant process to build a park on top of I-95 in Wilmington's West Side, according to U.S. Rep. Lisa Blunt Rochester's office. The funding is specifically for "capping" projects such as this one.

While identifying sources of funding to move forward with a project over I-95 is still in its preliminary stages, officials with Hargreaves Jones told Wilmington residents that many communities raise funds through private-public partnerships and create conservancy groups to then oversee completed projects.