The project is part of the Delaware Department of Transportation [DelDOT] Corridor Capacity Preservation Program. 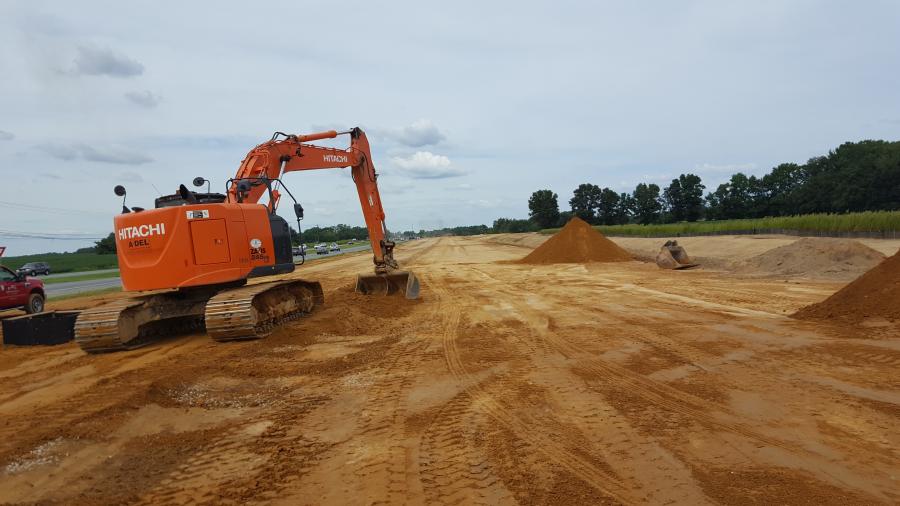 With traffic flow to the state's beaches and other areas in need of improvement, construction crews in Kent County, Del., are working to complete the $40 million SR 1, Little Heaven Grade Separated Intersection project. Located along the SR 1 corridor in the town of Little Heaven, the new overpass will remove the current intersection and traffic signal at Route 1 and Bowers Beach Road to improve safety and ease congestion on the Route 1 corridor.

"The project is part of the Delaware Department of Transportation [DelDOT] Corridor Capacity Preservation Program," said DelDOT engineer Craig Blowers. "The Department has the goal of upgrading or replacing many of the current at-grade intersections with grade separated intersections between Dover and Nassau. These projects increase safety, reduce crossing traffic on high speed roads and preserve the capacity of our existing infrastructure, reducing the need to build a new limited access road in the future."

The approximate limits are from south of Barratts Chapel Road to north of Mulberrie Point Road. Construction began at the end of 2015 and should be completed in late 2018. Blowers said the project is being completed in phases, partly because of utility conflicts and drainage concerns.

Minimizing traffic impacts on SR 1 was a priority.

"Especially during peak hour traffic. Much of this is being done by designing the project to shift SR 1 traffic to our proposed service roads while we build the new alignment of SR 1, including embankments and a bridge over what will become local roads."

The project actually began in 2003. Six alternatives were developed and presented to the public at a workshop in July 2004. Based on input received from the community, natural and cultural resources agencies and emergency response units, a preferred alternative was selected and formally presented later that year.

In November 2015, Gov. Jack Markell and Transportation Secretary Jennifer Cohan appeared with U.S. Senators Tom Carper and Chris Coons at a groundbreaking, posing with shovels to mark the official start of construction. Blowers said the improvements planned will serve motorists and pedestrians for years to come.

"The project is separating local traffic with turning movements from the through traffic on SR 1 by using service roads and high-speed ramps to remove signalized intersections from SR 1. Once complete, traffic on SR 1 will no longer have to wait for signals to cycle, which creates delays and significant queuing on SR 1 during the summer from beach traffic.

"Moving the turning movements to service roads also reduces the risk of high-speed crashes we've seen in the area. It will allow travelers from the Bowers Beach area to get to both Clapham Road and Barratts Chapel Road without the need to navigate traffic on SR 1. With the separation of local traffic from SR 1, we are also now able to add sidewalks in areas where pedestrians are currently walking on the shoulder of the road."

Currently, crews are focused on the end of Phase 1, and also are working on Phase II, completing widening in the area of Barratts Chapel Road. With the recent completion of the pump station, they are now able to begin drainage tie-ins and further progress through this stage of construction.

Additionally, work is under way on Phase III, constructing proposed Little Heaven Road and its associated drainage in preparation for a traffic switch that will allow the contractor to work on the bridge.

Average daily traffic on SR 1 is 37,000, with an estimated 46,000 by 2030. The elimination of two signals on SR 1 will reduce delays and the queuing from the signals. Once complete, motorists traveling on SR 1 from I-95 will not encounter a signal until SR 16/Broadkill Road in Sussex County.

"The sewer pump station is complete, as are the triple barrel pipes on SR 1 and box culvert under Ramps A & B. Proposed Barratts Chapel Road is complete, with tie-ins remaining. The key tasks that remain are the traffic switch of SR 1 NB to proposed Little Heaven Road, which will allow the construction of the SR 1 embankments, bridge and MSE walls to be completed."

Based on the current configuration, it was necessary to create a new traffic pattern on southbound SR 1.

"This was needed to install a triple barrel pipe run under SR 1 while maintaining two lanes in each direction," said Blowers. "Due to the size of the opening of the pipes, this qualifies as a bridge, and is designated BR 2-007D."

The Kent County sewer pump station has been a major factor during construction.

"Going in to the project, we knew one of the keys was the completion of the pump station. This is because the current force main runs primarily through the current median at an elevation that conflicts with much of our cross road drainage. The project was phased to account for this. However, the contractor has been able to carefully look at the plans and identify areas where would could be completed without impacting that conflict. That is why we are able to work in several phases simultaneously."

Future work in the area includes the reconstruction of Buffalo Road and Clapham Road south of Buffalo.

"Buffalo Road is being slightly realigned to line up across from Ramps A & B, where we will install a signal to control the intersection. Along with its realignment we are completing some minor widening and drainage work.

"Clapham Road south of Buffalo is being completely reconstructed and widened, with additional lanes needed at the new signalized intersection. Closed drainage and sidewalks are also being added. This work should take place in late spring/early summer."

Said Blowers, "The project's planned closures are all relatively short, both length of the detour and the amount of time the road is closed. So there is an impact, but it is limited. We haven't received much feedback from the residents. Most seem to understand that we all need to deal with the inconvenience during construction for the improvement we'll see at the end of the project."

Earthwork is being performed almost every day. With most of the borrow for the project coming from on-site sources, workers are constantly moving material. As much as 500,000 cubic yards of dirt will be shifted.

"The contractor has not started work on the bridge, and though they are able to complete some work, they must wait for the traffic switch to access all of it. It's actually two separate bridge decks sharing the same abutments. The decks are each 125 feet by 45 feet. Each of the two abutments has 31 piles, and the decks are designed to allow for potential widening in the future."

Specific work taking place includes roadway construction, underdrain placement, drainage installation, lighting, pond construction, fine grading for pavement, topsoil placement and permanent seeding and mulching. Key tasks remaining on the job include bridge work, the southbound SR1 roadway and drainage, paving, curb, sidewalk, striping and overhead and ground mount signs. The most time-consuming tasks involve excavation and embankment work. Most of the borrow used for the project is coming from on-site sources, so the priority is to efficiently move, stockpile and place the material.

Newark-based A-Del Construction Co. Inc., which specializes in the building and repair of heavy civil construction projects, is the general contractor. A-Del is responsible for relocating approximately 2.8 mi. of Delaware Route 1 to the east of the current alignment and installing an overpass over the existing Bowers Beach Road to eliminate a traffic signal that has been a long cause of congestion. Crews also are constructing a mile-long service road to the east of Route 1, to allow access to existing residences and to promote future business growth, and building a 2-mi. service road on the west side of SR1 that will allow access to the existing residences and businesses and connect to the existing SR12 on-ramp.

According to Jon Baker, A-Del vice president/project manager, "The project includes five large storm water management ponds, relocation of approximately 2,500 linear feet of sanitary sewer and 2,500 linear feet of sanitary force main. New drainage facilities include 37,000 linear feet of pipe, and [more than] 200 structures. A triple 72-inch pipe culvert was installed under existing SR1, using a phased construction process that allowed traffic to continuously flow in both directions. New lighting, ITMS and signalization will be installed throughout the project limits."

Crews have been mindful of the elements as they plan their activities.

"The wet weather last spring and early fall of 2016 was detrimental to the placement of the embankment, because the high moisture levels delayed placement of additional lifts of fill on the embankments. The soil content in the first two ponds contained higher amounts of silt and clay, causing it to take longer to dry out in wet periods. Also, the snowstorm in January 2016 delayed the onset of the bulk excavation and drainage work."

"The mild winter weather has been a big help in the earth-moving process. Groundwater elevations in the ponds required constant de-watering, in order to allow the soil to dry enough for placement in the fill areas. The relocation of the sanitary sewer system and pumping station was required for drainage installation in Phase 1 and II. The relocation has been completed, however Kent County Public Works is still in the process of pumping sewage out of the existing force main pipe prior to A-Del being able to abandon it. Once the line is completely abandoned, the crossroad drainage pipes can be installed."

Excavation and embankment for the proposed northbound SR1, Little Heaven service road, along with approximately 30 percent of proposed southbound SR1, have been completed, and roughly 60 percent is covered with GABC.

Two storm water management ponds have been constructed and completed to the final configuration. Two others are currently being excavated as on-site borrow pits. A total of 32,000 linear ft. of 6-in. perforated underdrain has already been installed.

Paving began in May on Little Heaven Road, allowing northbound SR1 traffic to be switched onto the road temporarily while the existing northbound lanes are removed and the proposed southbound SR1 lanes are constructed in the areas where they overlap the current northbound alignment. A wetland mitigation site will be constructed to offset the wetlands impacts. Wetland mitigation will begin construction in early summer, and will be used for embankment of the SR1 southbound bridge approaches.

Baker said construction of the twin bridges over Bowers Beach Road and work on the MSE walls will be a slow process. The walls are used to hold up the roadway embankment, and the fill has to be placed in 6- to 8-in. lifts to a height of approximately 20 ft. Each panel section is intricately unique in its placement in order to create the final wall design.

For crews, working on the assignment can mean long hours, but Baker feels the end result is well worth the effort.

"This project is a vital link in the conversion of Delaware SR1 from a four- lane divided signalized highway to a high-speed limited access from Dover to the beach resort area. The intersection of Bowers Beach Road and SR1 has long been a source of major traffic congestion along the corridor. It is rewarding to be involved in such a critical transportation link that will reduce congestion and ease the commute for Delaware drivers and tourists for many years to come. This is one of the most significant projects constructed in Kent County in the past two decades."