Demag CC 2800-1 Helps Out With Tandem Lift in Singapore 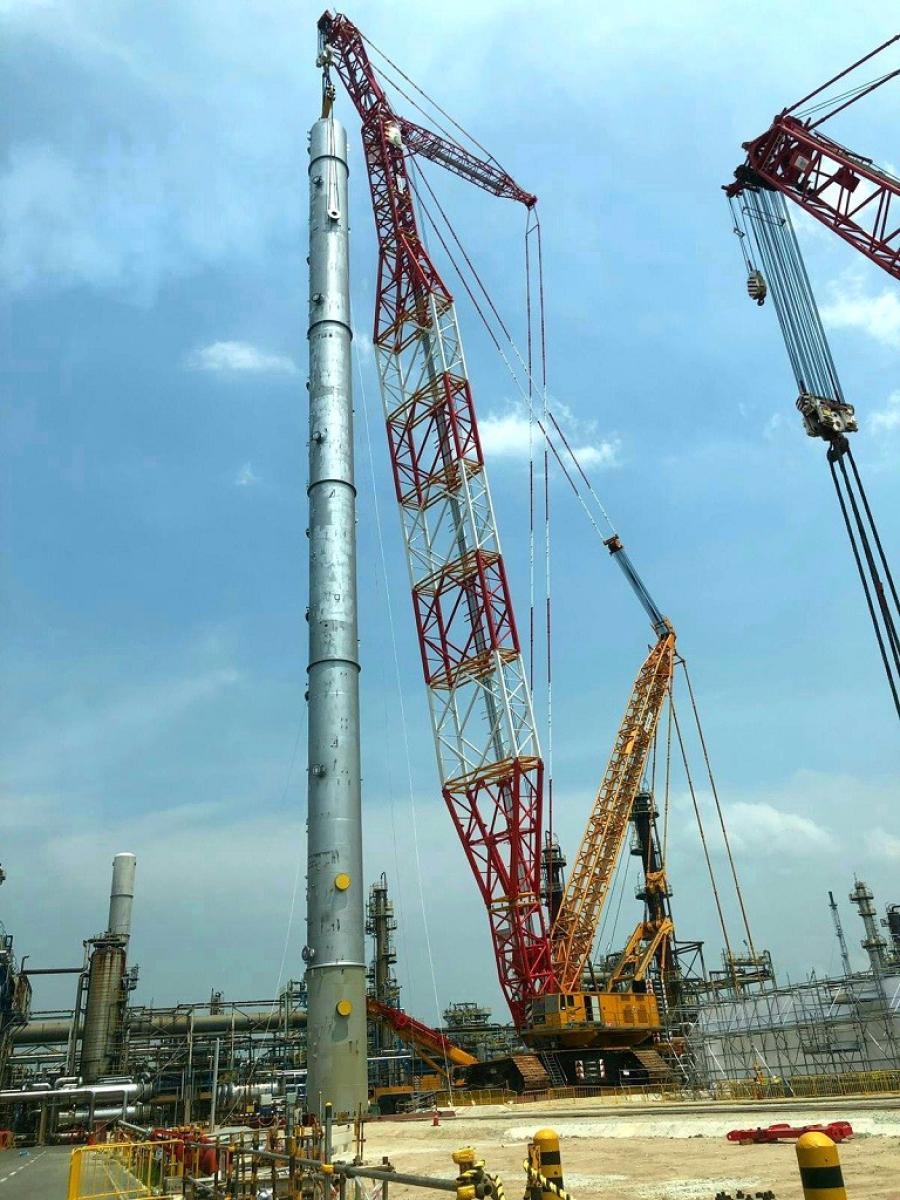 There are only a few jobs that require more than the enormous lifting capacity of a Demag CC 8800-1 with its standard configuration. Lifting a 328 ft. (100-m) long, 562 ton (510 t) C3 splitter tower at the Singapore Refinery Company propylene manufacturing plant was one such job. This is why crane service provider Tiong Woon configured its Demag CC 8800-1 with a boom booster, enabling the crane to carry out the demanding tandem lift together with a Demag CC 2800-1.

The fact that this was anything but a routine lift was clear from the get-go, as the CC 8800-1 had to first be set up for a test lift according to the local codes of practice. The test lift was carried out away from the actual work site with the support of Demag and in the presence of the ordering party.

The crane got the green light for the lift after successfully completing the test lift, and was then completely disassembled and taken with heavy goods vehicles to the "Merlimau Road" work site, where it was reassembled for the job.

Setting up the crane with its seven-part Boom Booster kit took the team, which consisted of six assembly technicians, six signal persons, and two supervisors, a total of five days — that is only one day more than the standard configuration would have taken.

"In order to speed up the process, one part of the team took care of assembling the base crane, while the other part took care of setting up the Boom Booster," said Tiong Woon's Deputy Chief Executive Officer Michael Ang.

He added that the reasons for assembling the CC 8800-1 that effectively were its ease of assembly and his team's experience, skills and outstanding training. Moreover, the team benefitted from the fact that the available space at the work site was extremely generous.

"Tandem lifts are already complex operations in and of themselves, but when you add a heavy load with this type of dimensions, things get even trickier," Ang said. Accordingly, the job was meticulously planned. Moreover, a technician and a mechanic were there at the work site, ready to fix any issues that might have occurred.

This conscientious preparation was an important reason why the Tiong Woon team was successful in carrying out the project to the customer's full satisfaction, and a few days earlier than scheduled to boot.

"We were at the work site for a total of 69 days with our cranes and 25 people on average. The fact that the weather conditions were ideal and, especially, that the two Demag cranes have such incredible performance characteristics played a crucial role in enabling us to finish the project earlier than planned — this goes particularly for the CC 8800-1 with the boom booster, which was an absolute requirement in order to be able to lift a load with these dimensions and this weight," Ang said.

"Needless to say, we were also tremendously thankful for the support provided by the Demag team during the test setup. It served as further confirmation of the fact that we can always rely on Demag for fast and expert help with any issues at any time, which is why we've always been happy with the service they provide."

This also is one of the reasons why the company decided on its two Demag cranes for this job.

For more information about The Tiong Woon Group, visit www.tiongwoon.com