Crane service provider Vernazza Autogru only had 130 hours to dismantle an old railroad bridge, owned by French railway company SNCF, in Mandelieu-la-Napoule, west of Cannes. In order to tackle the job, in which time was of the essence, the company relied on its brand new Demag CC 3800-1 crawler crane, which was in turn assisted by a Demag AC 120 all-terrain crane.

Although the Demag AC 120 had been in use at Vernazza for quite a while already and was used to set up and disassemble the crawler crane and its Superlift system for the job, it was the first time ever that the team would be using its Demag CC 3800-1 crawler crane.

"We just received the crane from the manufacturing plant in Zweibrücken a few days ago. It actually took 45 transportation trucks to deliver it here to the South of France, where it will get the chance to prove its mettle right away," said Vernazza France General Director Paolo Delfino.

There were a number of reasons why the brand new crane was the right choice for the time-critical job: On one hand, the Demag CC 3800-1 crawler crane had the lifting capacity needed to remove the bridge components, each of which weighed up to 126 ton (115 t). On the other hand, its crawler width of only 6.5 ft. (2 m) made it compact enough to operate at the tight work site premises. And perhaps even more importantly: The crane could be set up quickly and easily, which was especially vital for this specific job due to the tight timeframe. In addition to this, and like any other time a Demag crane is used for the first time, a member of the Terex Cranes team would be there to provide on-site support when debuting their new crane.

Set Up and Ready to Lift in Four Days 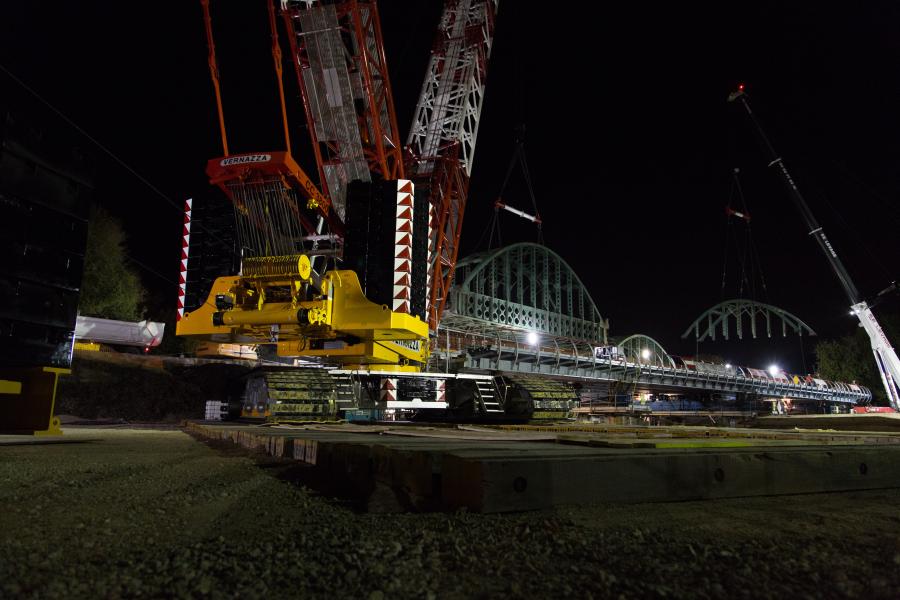 For the upcoming lifts, the Vernazza team decided on an LSL configuration with a 256 ft. (78-m)-long main boom, Superlift system, and Split Tray. The team had to tackle a number of challenges during setup, disassembly and even the lifts themselves: The space available at the work site was anything but ample, as the river Siagne runs right next to where the crane was being used, not to mention the fact that there was a neighboring golf course. In other words, there was very little space to put down the dismantled bridge components. And to make things even worse, the weather decided not to play along and came in with a wild mix of rain, wind, and brief sunny moments.

Despite all this, however, the team and its six assembly technicians managed to successfully set up the Demag CC 3800-1 in only four days as planned. And once the first-time-ever setup was complete, there was nothing standing in the way of dismantling the old steel bridge, as SNCF had closed off the railroad section for 130 hours. This time had to suffice for lifting and removing a total of eight heavy steel components that were up to 72 ft. (22 m) long, 19.6 ft. (6 m) wide, and 26 ft. (8 m) tall, as well as for a number of smaller lifts for bridge components that were not quite as enormous. And in order to be able to stick to the tight schedule, the team not only had the crane operators for the CC 3800-1 and the AC 120, but also four rigging technicians, a lift supervisor, and a Superlift supervisor for each shift. All in all, the team had 22 people at the work site. 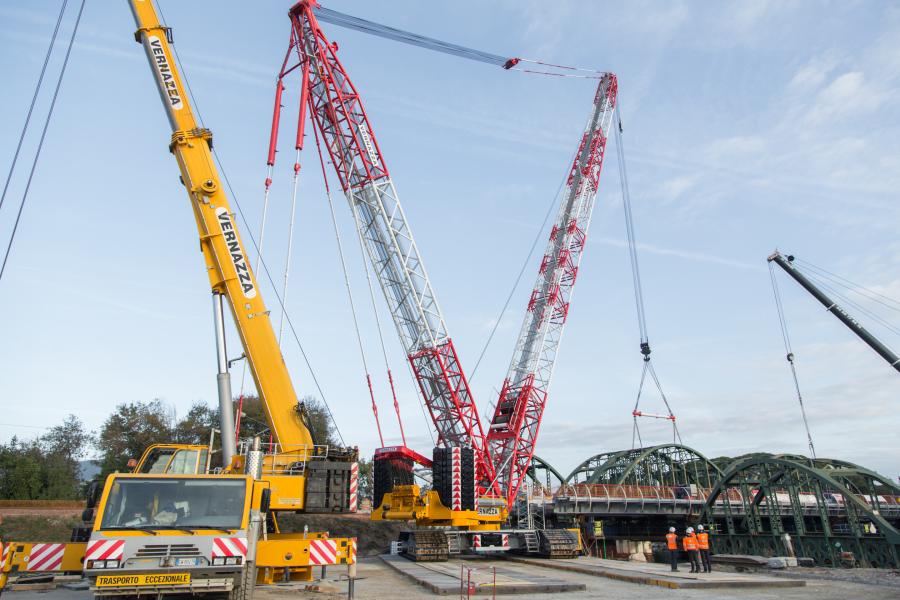 For the heavy lifts, it was necessary to lift 82.6 ton (75-t) components at a maximum radius of 223 ft. (68 m), as well as 126.7 ton (115-t) components at a radius of 141 ft. (43 m). All these lifts followed the same pattern: The Demag CC 3800-1 lifted the components, traveled 59 ft. (18 m) under load to get them to the location where they needed to be set down, and then put them down, after which it returned to its lift area. This made it possible to completely dismantle the bridge within the defined timeframe, ensuring that the CC 3800-1 would be able to finish its very first project on time after exactly three weeks at the work site. So the only question remaining is what the people at Vernazza Autogru think of the CC 3800-1's debut:

"The new crane met all our expectations — it's powerful, reliable, and incredibly easy to operate. It did its job perfectly," Technical Manager Matteo Ciminello, technical director of Vernazza Italy, said. And he also is extremely pleased with the on-site support provided by Terex Cranes: "Terex Cranes' technicians and after-sales support are just as good as its cranes."

Vernazza Autogru, which was founded in 1946 in Italy and today is a company with international operations, specializes in crane work, access technology operations, and transportation services. In France, the company has a branch office in Nice. Vernazza has a fleet that features around 250 ehicles and machines. These include not only telescopic cranes, crawler cranes and lattice boom crawler cranes, but also self-propelled aerial work platforms, trucks, truck tractors, semi-trailers and special transport vehicles. Vernazza Autogru provides its customers with full-service offerings that range from project studies, through planning, all the way to performing an extremely wide variety of projects. 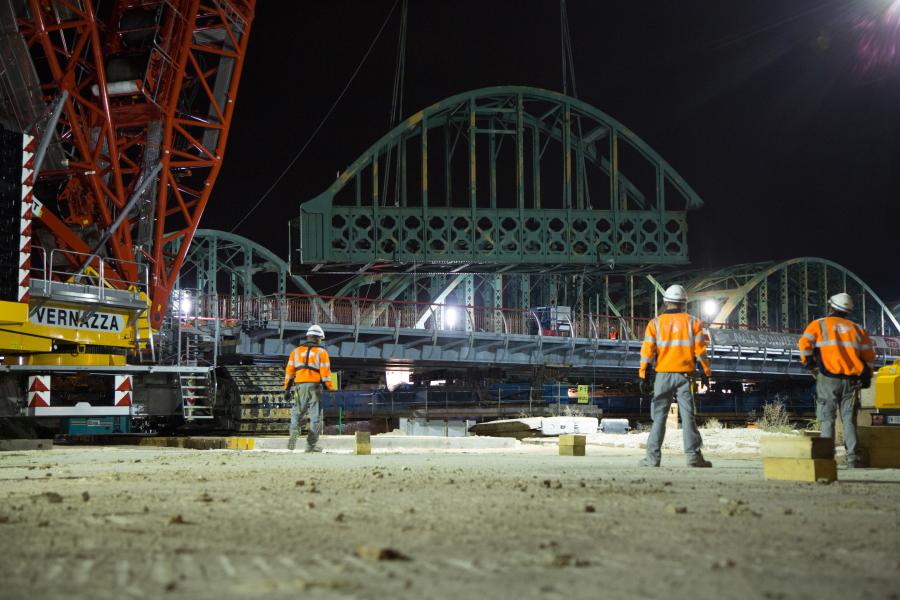