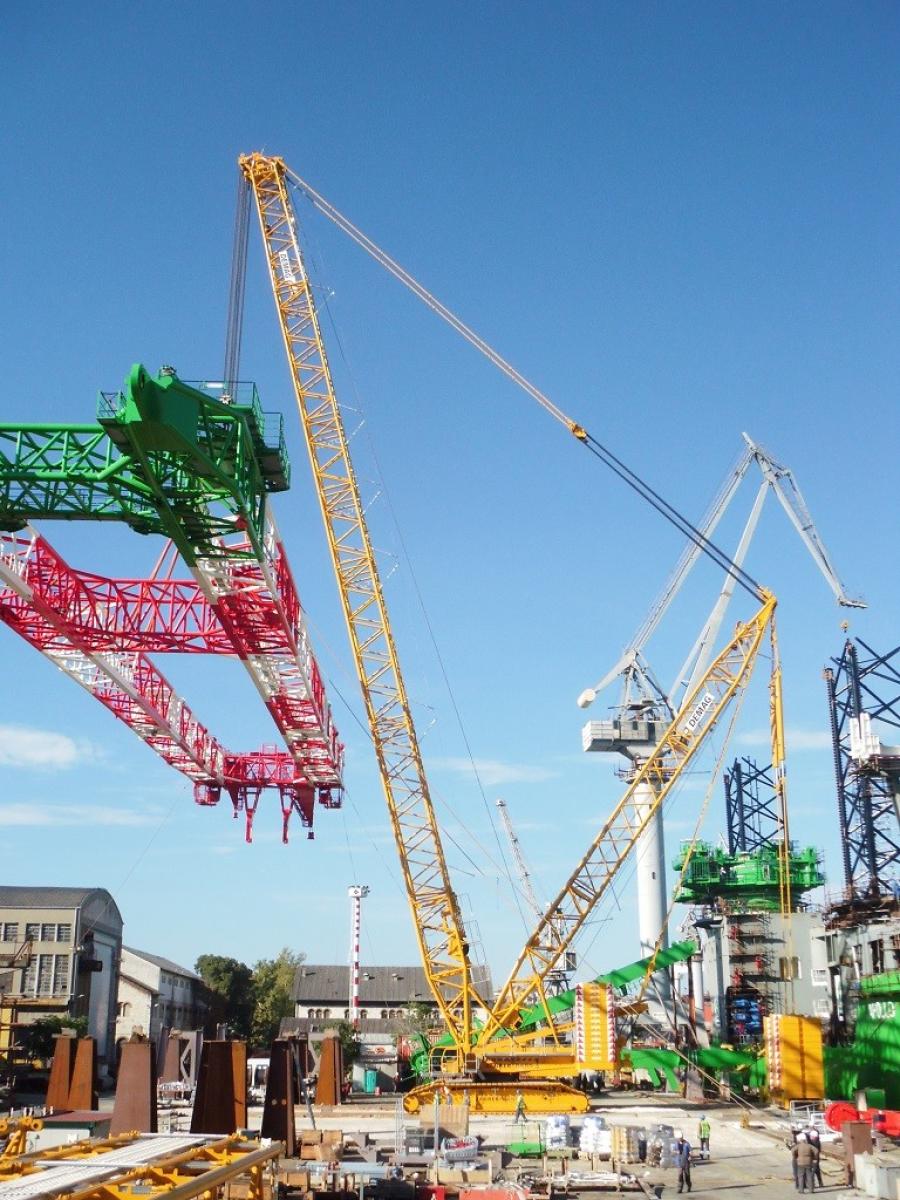 Project Manager Ivica Šerlija from crane service provider Zagrebtrans knew from the very start that the upcoming job for the Uljanik shipyard would be associated with a number of special challenges. After all, they would have to lift components with a weight of up to 400 tonnes for the assembly of an off-shore platform crane. The estimated time for the job was six months, a period that covered virtually the entire range of weather conditions in Croatia, including the extremely hot summer months and the notorious thunderstorms with powerful winds.

In terms of equipment, the team had to find a solution that would be optimal for the conditions on site and for the upcoming lifts. “We decided on our most recent acquisition – a new Demag CC 3800-1 lattice boom crawler crane. A number of factors made it the ideal choice, with the two most important ones being its enormous power and its long boom length,” Ivica Šerlija said.

Around 50 trucks were used to transport the CC 3800-1 crane directly from the Terex Cranes plant in Zweibrücken to the shipyard. The convoy required just under seven days for the journey of more than 1,000 kilometers, and the five-person Zagrebtrans team took approximately the same amount of time to get the crane ready for lifting at the shipyard. The chosen configurations for the upcoming lifts were SSL 1 with a boom length of 72 meters, LSL 11 with a boom length of 102 m and LSL 13 with a boom length of 126 m, as well as 22-part reeving. The counterweight consisted of 225 tonnes, as well as an additional 325-tonne Superlift counterweight and 50-tonne central ballast.

With these configurations, the CC 3800-1 was perfectly prepared to tackle all the lifts. The heaviest load weighed 400 tonnes. Other components had to be lifted to a height of 102 meters or set down at a radius of 52 meters. All the lifts followed the same basic pattern: The loads would be picked up and lifted, the superstructure would rotate 180° in the direction of the platform, and the crane would travel forward under load. Once the defined end position was reached, the load would be set down on the platform at the exact position required so that it would be assembled there. Zagrebtrans had two crane operators at the work site, and both of them can attest to the fact that the CC 3800-1 demonstrated extraordinary performance and precision during all lifts. In addition to the unit's enormous lifting capacity, compact dimensions, and ability to travel even when under heavy loads, they found the Vario Superlift system to be absolutely invaluable for the tight space conditions at the shipyard, as the system is designed with the ability to reduce the radius of the counterweight tray during a lift.

For both the crane operators and the assembly technicians the CC 3800-1's ease of use was clearly evident throughout the entire project. Nevertheless – and as is the case for the first project with any new crane – there was a Terex Cranes service technician at the site in Pula in order to provide the Zagrebtrans team with support during the first crane setup and during the heaviest lift. “This was a service offering that we were all too happy to take advantage of, especially since Terex team members are extraordinarily dependable and trustworthy. And since the chemistry and communication between us was perfect, we found the contact to be extremely helpful,” Ivica Šerlija said.

Zagrebtrans, which was founded in 1989 and today employs over 150 people, is headquartered in Zagreb. Its business includes the national and international shipping of large and oversize goods by road and rail, as well as by water with inland and ocean vessels. The company also offers combinations of these transport routes. Zagrebtrans also provides crane services for loads of up to 800 tonnes, and the company uses nine Terex cranes for this purpose as of this writing.

As a full-service provider, Zagrebtrans also offers turnkey projects that include shipping, transloading, and setup as part of its range of services, and can also obtain official permits and organize wide load transports with escort vehicles and hazardous material transports. The company's portfolio is rounded off by services revolving around transport studies and route surveys.