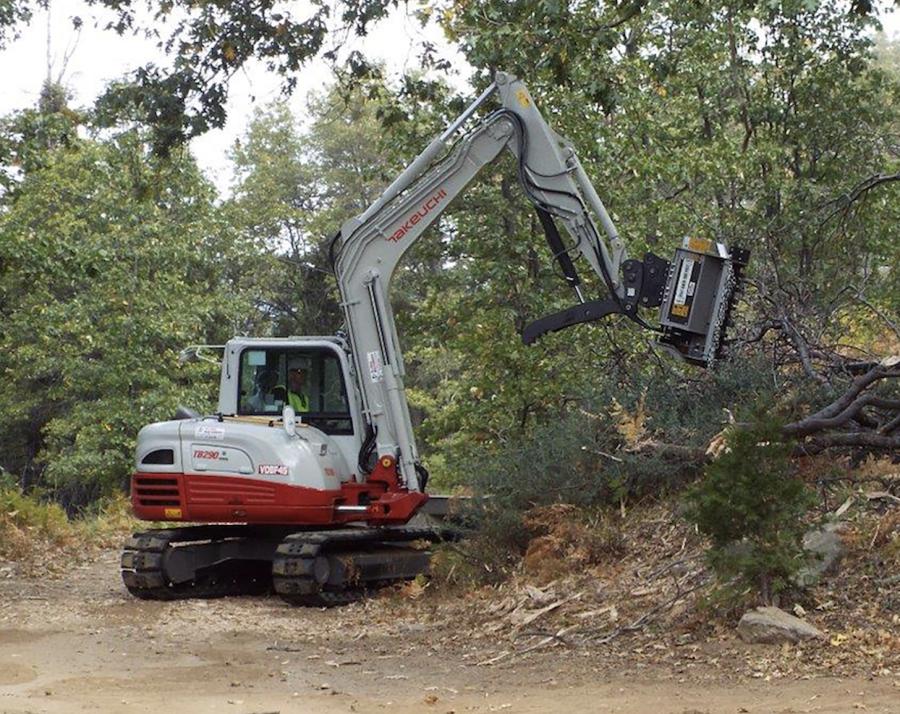 At Shaver Lake and Big Bear, the TB290 was used to masticate an overstory of mixed conifer, with extensive cover of manzanita with whitethorn, dogwood and black oak, with diameters of 3 to 6 in. (7.6 to 15.2 cm) and slopes up to 40 percent.

In 2015, more than 6,000 fires occurred in California, which saw just over 300,000 acres burned, according to the California government. Between that same time period the previous year, there were 2,000 fewer wildfires and over 100,000 fewer acres burned. California's rough year included the Butte Fire, which saw close to 80,000 acres burned, a mandatory evacuation for all of San Andreas, and a state of emergency declared by Gov. Jerry Brown in two counties.

The epic drought California is experiencing was a big factor for such heightened wildfires, so several California governmental agencies came together to figure out a more proactive approach. The end result was to host three separate week-long demonstrations throughout central and southern California this past fall, highlighting the best new technologies, equipment and local resources for several key state forestry attendees. The demos were part of the greater goal of improving the management of forests to help prevent disastrous wildfires from happening in the future.

The United States Department of Agriculture Forest Service, Southern California Edison, University of California (UC) Berkeley Center for Forestry, and 12 other partners hosted this initiative, which was titled, “Hazardous Fuels Reduction Demonstrations”. The demo had several short- and long-term goals, but the primary objective was to reduce highly flammable debris and vegetation, like small or dead trees and thick brush.

Global Machinery, a rental, sales, and service provider located in Sacramento, played an instrumental role at the demo, providing machines, equipment, and operators to each location to help clean up brush.

“The drought has had many profound effects throughout California and has been one of the core reasons why we have had so many wildfires this year,” said Jim Cunningham, sales manager of Global Machinery. “There were many working pieces in this demo, so it was great to see our company be able to make an impact on the communities involved and potentially the forest industry moving forward. Ideally this demo will make a difference for years to come.”

According to the University of California Agriculture and Natural Resources, the expected short-term results included a better grasp on planning a budget for future fuels treatment projects; improved awareness regarding equipment options; and impacts, as well as making local contractors better aware of how to make informed business decisions on the equipment they can purchase or lease.

Though their short-term results were mostly business-related, their long-term project objectives primarily targeted protecting the environment. This includes improved wilderness and watershed health; a better aptitude to defend communities and infrastructure from wildfires; a potential increase in acres treated; and local job retention.

The demos featured excavators and track loaders that were equipped with motion and vibration detectors to track their every move on-site. The movement and vibration readings were part of a cost analysis UC Berkeley is currently performing to determine which brands of equipment were the most effective during the demos. Those readings included which machines had a lighter footprint, the level of ground disturbance issues, as well as production and clearing rates. While the machines did a large part of the cleanup, the demos also featured a large herd of goats to chew up thick brush as well as a crew from the California Conservation Corps to remove brush manually.

Global Machinery sent two of its Takeuchi machines to the various locations. Local contractors ERT Inc. and Rivard's Earthworks operated the demo machines, which included a Takeuchi TB290 hydraulic excavator, with an FAE DML/HY-100 VT mulching head; a TL12 track loader, with an FAE UML/SSL-150 VT head; and a FAE Prime Tech PT-175 prime mover. The TB290 is the second largest excavator in the Takeuchi lineup, while the TL12 is the largest Takeuchi track loader and the PT-175 is the smallest of the four prime movers that FAE builds.

At each location Global Machinery was given a specific number of acres to run its equipment, during a two to three day production period (varied at each location) with varying terrain types, with up to 100 percent slope.

At Shaver Lake and Big Bear, the TB290 and TL12 were used to masticate an overstory of mixed conifer, with extensive cover of manzanita with whitethorn, dogwood and black oak, with diameters of 3 to 6 in. (7.6 to 15.2 cm) and slopes up to 40 percent.

The PT-175 was used for removal of the same type of material, but in the heavier brush with tree diameters up to 10 in. (25.4 cm) and slopes up to 80 percent. At the Santa Rosa Indian Reservation, the material removed was primarily Chaparral, leaving the Pinon, Manzanita and Ribbon Wood. Global Machinery cleared a total of 48 acres in the combined six days of production.

“This was a great opportunity for us and our equipment to be in front of so many key decision makers in the forest industry and really show what the Takeuchi machines are capable of,” Cunningham said. “The Hazardous Fuels Reduction Demonstration was a really well-done demo and something that is good for not only the industry as a whole, but all the communities involved as well. All attendees involved were able to see firsthand different machines, equipment, and new techniques they may have otherwise not considered without the demo.”

While the Hazardous Fuels Reduction Demonstration has come to a halt, results from the demo are currently under way. According to the California government, the five-year average saw nearly 1,800 fewer fires and 200,000 fewer acres burned than in 2015. The National Interagency Fire Center also released data indicating that the 2015 nationwide wildfire season had surpassed any other wildfire season in the last 10 years with approximately 8 million acres burned.

Now more than ever, these demos were crucial for the industry to take a step back and see what local resources and new technology can do to help not only reduce the number of wildfires, but to take a proactive approach to get out ahead of it the best they can.