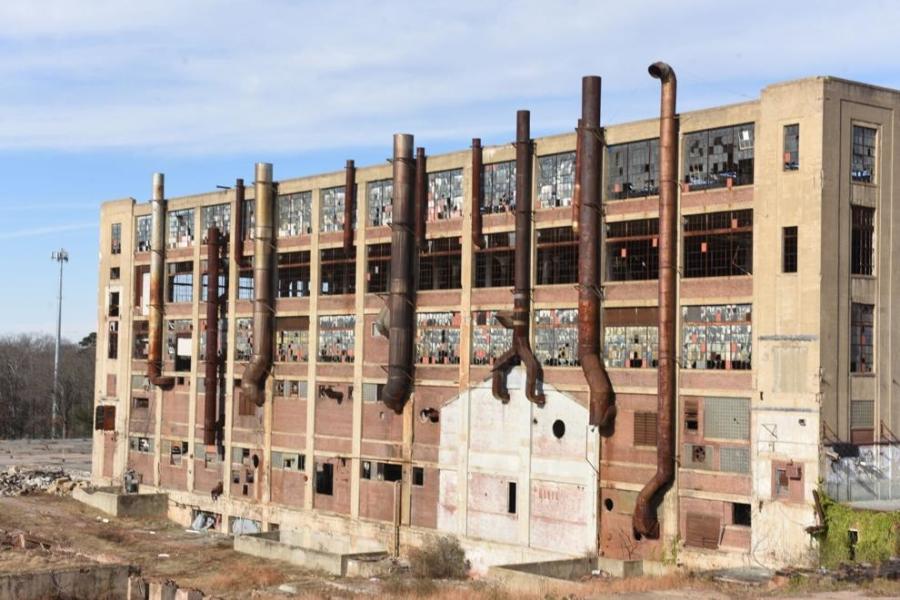 Abatement work is under way at the former Dan River Inc. finishing building at Schoolfield to prepare the structure for removal and make way for the Caesars Virginia casino. (John R. Crane, Register & Bee photo)

Work is under way to prepare for the removal of the former Dan River Inc. finishing building to make way for the $500 million Caesars Virginia resort casino in Danville's Schoolfield District.

"The structure will then be clear for removal, with an estimated timeline into early summer," he noted.

The abatement process involves several mechanical demolition processes, Livingston said. This encapsulation is a safe way of removing hazardous materials, such as asbestos, lead and other harmful substances, from a structure in a way that they no longer pose a public health threat.

Getting rid of the hazards will be done in a way "providing the highest degree of safety and comply with all governing regulations," Livingston added.

The work is being performed by Demolition & Asbestos Removal Inc. (DARI), based just to the south in Greensboro, N.C.

Building material deemed appropriate will be crushed and reused on site where possible, he said, with some brick targeted to be recycled and used in landscape areas.

General Contractor to Soon Be Chosen

The Register & Bee reported that Caesars Virginia issued a request for proposals for construction of its upcoming casino and hotel resort in December.

Bids are due at some point in January with the goal of selecting a general contractor for the building effort by the end of the month, Livingston said in December.

After that, Caesars Virginia wants the contractor to be able to mobilize on site in the spring, with construction on the new buildings — including the hotel towers — to start soon thereafter.

A date for the casino's construction groundbreaking will depend on both that mobilization and the weather, Livingston explained.

Demolition and abatement at the old mill site first began last September to get the property ready for new construction, the Danville news source learned, and Livingston reiterated to the Danville newspaper that the take down of the abandoned Dan River textile finishing building will not slow down the overall project.

"Construction will begin in other areas of the site, so debris removal and crushing will take place simultaneously with the new construction," he said.

Danville to Get a Huge Downtown Boost

The Caesars Virginia gambling and entertainment facility is planned to be a destination resort casino, with 500 hotel rooms, a spa, pool area and fitness center.

The casino will feature more than 1,400 slot machines and table games, Caesars Sportsbook, and a live World Series of Poker room with 25 tables, Caesars Entertainment has said.

Meeting and convention space will total 40,000 sq. ft. with an entertainment venue to accommodate up to 2,500 guests. In addition, the resort will include restaurants and bars.

In fact, the current plans for Caesars Virginia include 200 more hotel rooms than originally planned and $100 million more investment than the initial development agreement.

Caesars also noted that 900 construction jobs will be filled as well as 1,300 operational jobs.

The casino site helps fulfill a plan to reimagine Danville's Schoolfield District, made up of more than 90 acres of abandoned manufacturing real estate and wasteland-like landscape in the heart of the iconic southern city, just south of the Dan River.

Danville was chosen to be a site for the casino after the Virginia General Assembly approved them for the state in 2020. City voters approved the resort in November of that year.

Caesars, which opened its first casino in Reno, Nev., in 1937, is the largest casino operator in the United States. Its Las Vegas properties include Caesars Palace, Paris Las Vegas, Harrah's, and Flamingo. It also owns the Horseshoe Casino in Baltimore.