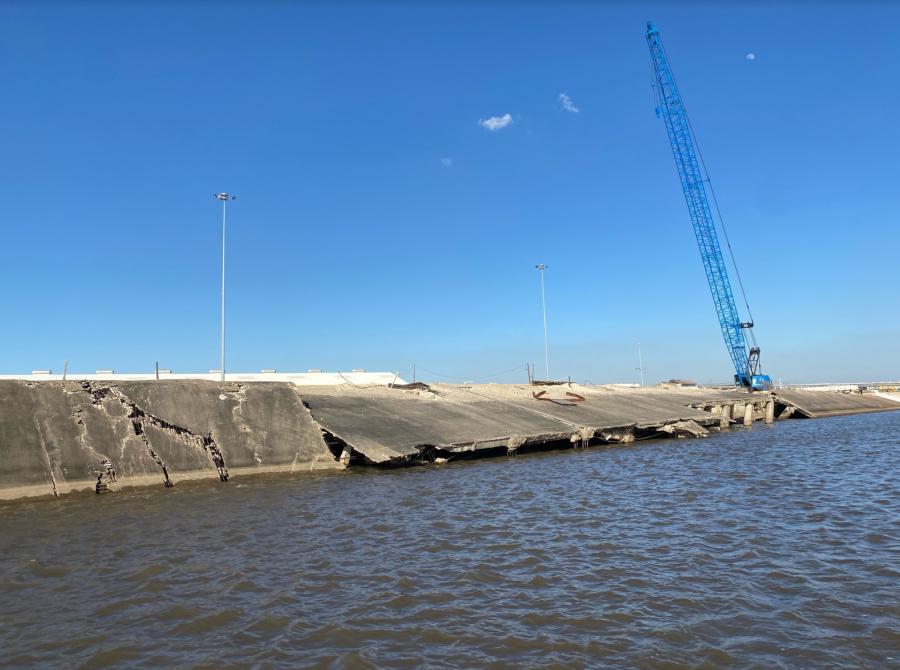 A ginormous concrete dock, the main component of a $57.3 million federally funded project, will soon become a part of the historic Port of Beaumont's Main Terminal, the nation's fourth busiest commercial port, but not before the collapsed century-old dock is demolished and removed, a task that requires a "creative and collaborative approach," according to Robert Wood, project manager of McCarthy Building Companies in Houston, the project's general contractor and nation's fifth largest port and marine builder. Wood said demo work began in February and that the completion of the deck is scheduled for May 2024.

Portions of the original dock, which collapsed in 2012, are still standing. Before the new 1,200-ft. long, 130 to 152-ft. wide concrete dock can be installed, the remaining dock must be collapsed and everything removed off the floor of the dock's home, the deep-water channel of the Neches River. This requires working in conjunction with a team of six divers, all independent contractors and the use of special equipment. 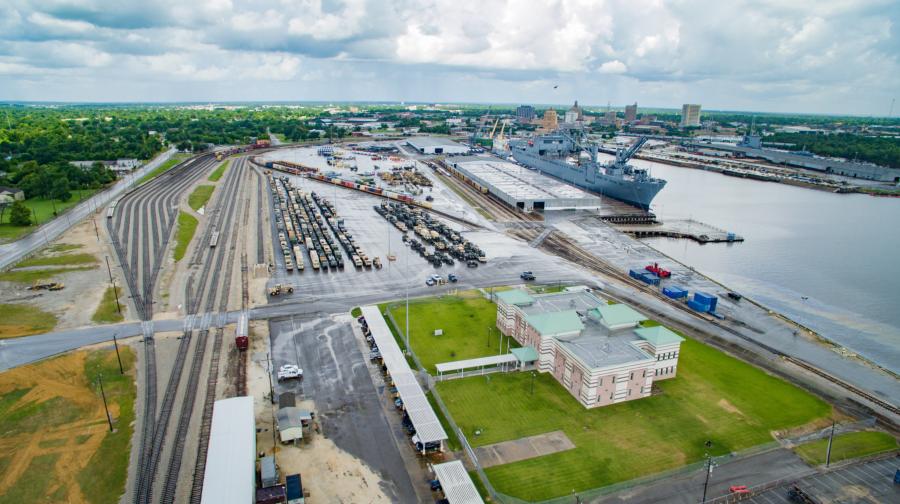 "We've done a lot of investigation work, including a hydrographic survey with a side-scan sonar and 3D modeling showing what's left of the structure underwater," Wood explained. "We work with the divers to understand what's down there. And we're using special demolition equipment, which includes pile shears to cut the pile, an excavator with a breaker and a 10-ton torpedo punch with guide system, custom-designed by our field guys, to punch out the dock, and two Manitowoc 4100 cranes — one on a barge and one on land.

"If this were a job that just called for the dock to be smashed and broken up, the demo work would be easy," Wood added. "But since we're installing a new dock, we must clear a slope for the new pile, free of any concrete chunks that could cause breakage when we drive the new piles. Removing the jagged pieces, some with rebar attached and stuck in mud 40 to 45 feet below the surface. After we smash pieces of the dock, we rely on diver feedback and position-marking buoys to aid the removal process. At the end of the day, this is a dangerous and high-risk project that requires of us a 100-percent focus on the safety of our team."

Construction of the new dock will commence when McCarthy demolishes and clears up enough area started at the east end and will consist of concrete piles, cast-in-place concrete caps and beams, precast concrete deck panels a concrete topping slab and marine fenders and bollards. The company is performing all the concrete and pile installation, as well as utility installing, including water and sewer. Equipment includes several Manitowoc lattice-boom crawler cranes: a 16000 crane with maximum lifting capacity of 440 tons, positioned on a barge for pile installation, 275-ton (on a barge) and 230-ton (on land) cranes for concrete support, and a unique company-owned concrete forming system that Wood describes as a "conventional falsework system supported by friction collars and steel beams over the water."

Why History Won't Repeat Itself

It's easy to see why the old dock partially collapsed: it was built in the early 1900s as a timber-pile dock with concrete upgrades and steel piles added in the 1950s and 1960s, which eventually corroded, leading to the dock's demise.

"This project represents an evolution in marine construction and is ushering the port into a new era of development," noted Brandon Bergeron, director of engineering at the Port of Beaumont.

"We are pleased to work alongside the Port of Beaumont to build an important piece of infrastructure that will have positive economic and community impacts," Wood added. CEG