The wrecking balls are not swinging yet, but demolition is getting under way at the mill property on River Road in Bucksport, Maine. 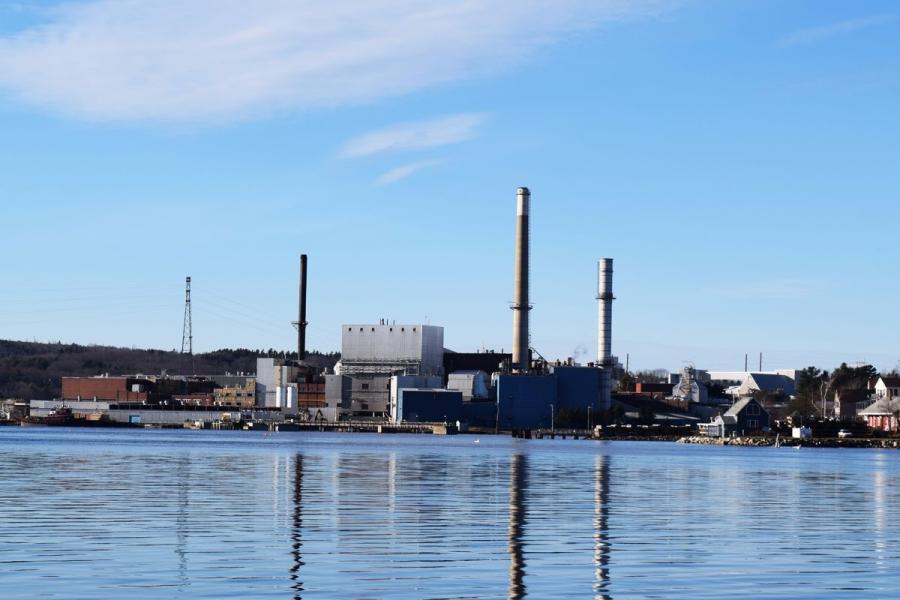 Charles Eichacker, The Ellsworth American photo The wrecking balls are not swinging yet, but demolition is getting under way at the mill property on River Road.

The wrecking balls are not swinging yet, but demolition is getting under way at the mill property on River Road in Bucksport, Maine.

AIM Development, the U.S. subsidiary of a Canadian scrap metal recycler, bought the shuttered mill from Verso Paper Corp. last winter and received its demolition permit from the town in late November. In September, it received a demo permit from the state Department of Environmental Protection (DEP).

With the red tape behind it, the company plans to take down the mill in several phases over the next year, according to the application it filed with Maine DEP in July.

That application was prepared by engineering consulting firm CES Inc. A copy is now publicly available at the town office. Filling a large, loose leaf binder, it is a chunky document that provides a blueprint for the work that will take place on the 123-acre mill site.

Early this week, the only evidence that work was beginning was a backhoe operating at the property's southwestern corner, near where papermaking took place.

It's also where the first phase of AIM's demolition will take place. Once those buildings are torn down, demo crews will move on to a strip of buildings where pulping occurred. The last phase will see the removal of a wastewater treatment plant that used to serve the mill.

All together, the company expects the project will cost $4.5 million and require as many as 35 employees (some of whom have been hired locally).

It will generate an estimated 14,000 cu. yds. (10,703 cu m) of debris, which will be removed by rail car on a track that runs between Bucksport and Bangor. It will be disposed of at either the Crossroads Landfill in Norridgewock or the Juniper Ridge Landfill in Old Town.

According to the company's application, that debris will include, “but is not limited to building materials; discarded furniture; asphalt; wall board; pipes; and metal conduits. It excludes: partially filled containers of glues, tars, solvents, resins, paints or caulking compounds; friable asbestos; and other special wastes.”

The company also predicts removing 18,000 tons (16,329 t) of metal from the site, some of which will be shipped to Montreal for recycling.

State of the Rail

Several cars have derailed from that track in recent years, and on at least one occasion papermaking chemicals spilled into the Penobscot River as a result.

Officials from both AIM and Pan Am Railways, the company that owns the rail line, have said the track was inspected last summer and deemed to be safe. Along with debris removed from the mill site, the rail also will carry environmental waste removed from the HoltraChem site.

“Our current plan is to run to Bucksport once a week until the snow stops us,” Cynthia Scarano, Pan Am executive vice president, wrote in an email last month. “We will resume in the spring.”

But who is responsible if there is a derailment and it causes damage to private or public property?

The Federal Railroad Administration, not the Maine Department of Transportation (MDOT), regulates rail lines around the country.

Because of that, Nate Moulton, director of MDOT's rail program, declined to speak about the specific line between Bucksport and Bangor. He said in general, however, it's usually the railroad owner, in this case Pan Am, that assumes liability in the case of accidents.

But a shipper such as AIM could bear some legal responsibility if it mislabeled cargo, Moulton added. If there were a dispute, it would fall to a judge to determine liability, he said.

Reprinted with permission of The Ellsworth American.