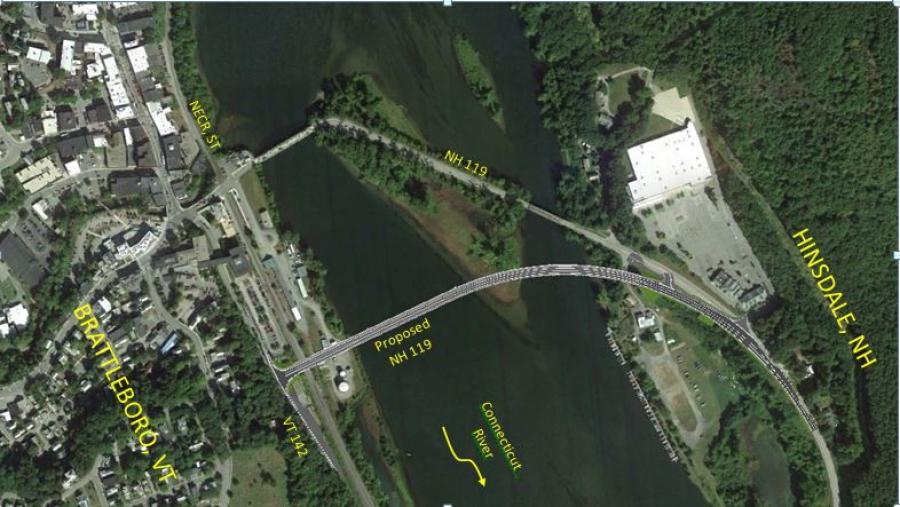 Ideas presented recently for what to do with the two old bridges connecting the towns of Brattleboro, Vt., and Hinsdale, N.H., all started with acknowledging the Connecticut River, the wildlife and the historical uses of the island between the two.

In mid-October, the public got its first glimpse of various design ideas, presented by a professor from Landscape Architecture and Regional Planning at the University of Massachusetts, Amherst.

Features of the designs, which were created during a special studio with students of Prof. Robert Ryan, included beaches, a kayak landing, boardwalks, an event area and small amphitheater, parking for food trucks, green space, walkways lined with flowers and a spot to fish.

The Southwest Region Planning Commission hosted the webinar on behalf of the Hinsdale-Brattleboro Bridge Project Advisory Committee, which includes select board members from both communities, plus representatives from the New Hampshire Department of Transportation (NHDOT), the Vermont Agency of Transportation (VTrans), the Windham Regional Commission, and Southwest Region Planning Commission.

Reporting to the advisory committee is the existing bridges subcommittee, which was tasked with developing "a vision for the Charles Dana and Anna Hunt Marsh Bridges and Hinsdale Island." The two bridges are slated to be decommissioned and rehabilitated when the new bridge connecting the two towns is open to traffic in October 2024.

The subcommittee's tasks include "envisioning activities and uses of the bridges and island, physical changes that might happen, management and maintenance considerations and expected impacts on economic development, tourism and recreational opportunities."

Ryan brought 14 students to the bridges right before the pandemic state of emergency was declared last spring. He said the students did a lot of research and talked to people before settling down to draw up their own visions.

Most important, said Ryan, was creating a place that is in harmony with the river and the island while offering a place where people could connect with themselves, the community and nature.

In her design, Makenna Palzkill suggested building earthen jetties along the east side of the island to restore it to the size it was before Vernon Dam impounded the river.

"This is a proposal to grow the island using the natural accretion of sediment coming down the river," said Ryan, who presented four of the designs during a virtual meeting of the Hinsdale-Brattleboro Existing Bridges Subcommittee.

Another proposal envisioned a boardwalk up from the river along the Whetstone Brook, past the waterfall and on to trails in Brattleboro.

Rachel Newman proposed a woodland promenade where the road is now, with terraced gardens and a fishing dock.

In the designs, the bridges were cleaned up after an $8 million rehabilitation, with overhead artwork, a bike path and a walking path with raised planting beds and seating areas to watch the river and traffic on the new bridge.

According to the NHDOT, the rehab of the existing bridges for pedestrian use is expected to cost Vermont $1.4 million and New Hampshire $6.6 million. Construction costs for the new bridge are $33.5 million for New Hampshire and $8.5 million for Vermont.

Trent Zanes, of NHDOT, said because people transporting boats with a car or truck won't have access to a boat launch on the island anymore, the state is proposing a new boat launch 5 mi. south at an existing launch on Prospect Street in Hinsdale. The proposal includes paved parking, access to gravel parking and the ability to launch directly into the Connecticut River. Currently, boaters must launch into a channel first and navigate their way through a rail trail underpass.

The boat launch would belong to the town of Hinsdale when complete. Zanes said the town will be responsible for maintaining the boat launch, but he didn't see much more than occasional mowing needing to be done.

And once the bridges are cleaned up, said Don Lyford, project manager of NHDOT, the bridges and island belong to Hinsdale.

"Right now, the plan is to fix them up for a 50-year life and turn the bridges over to the towns," Lyford said.