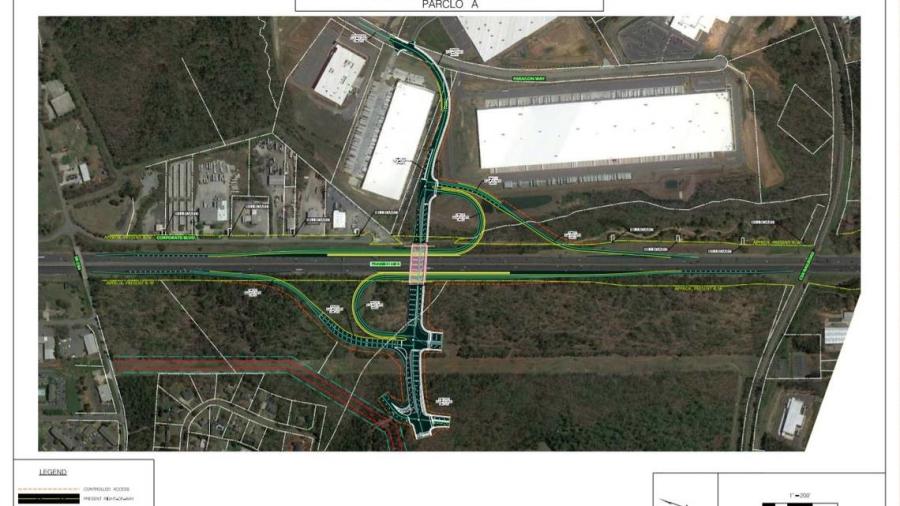 A public notice went out in 2020 on the new I-77 interchange in Rock Hill for the Carolina Panthers headquarters project. (SCDOT photo)

Although work was halted in March on the Carolina Panthers' massive, modern practice facility and team headquarters in Rock Hill, S.C., construction is back under way on the so-called "Panthers Interchange" on Interstate 77 that leads to the site.

South Carolina Department of Transportation (SCDOT) officials have set a target date of May 23 to have the project completed.

The NFL team is owned by billionaire David Tepper, and run by his company, Tepper Sports and Entertainment. Another Tepper-owned entity, GT Real Estate Holdings, later terminated the deal it had made with Rock Hill and York County officials to build the new home for the Panthers' football operations as disputes over finances had gone unresolved.

Although hopes persist in the Palmetto State that talks between Tepper and South Carolina authorities can be revived to build the facility, so far there are no indications of that happening.

Construction work at the Panthers' site might be stalled, or even finished for good, but work on the interchange has not stopped, according to WBTV, the CBS-TV affiliate in Charlotte.

The station reported May 3 that SCDOT is overseeing construction on the interchange between U.S. Highway 21/Dave Lyle Boulevard and S.C. Route 122/Cherry Road.

The $48 million project, located near mile marker 81 along I-77, is the gateway to any future Panthers' practice facility, as well as other roads in the surrounding area. When the infrastructure work is finished, there will be a massive bridge and easy access exits for drivers.

It also will provide access from I-77 to a new boulevard named One Carolina Drive, SCDOT noted on its website, that will provide a connection to Mt. Gallant Road to the west, Paragon Way /Cel River Road to the east, and Eden Terrace to the north.

A $36 million grant from the U.S. Department of Transportation, along with an equal-amount match from the state's Department of Commerce, will make up most of the funding.

The highway project is the only construction project going on in Rock Hill that could benefit the Panthers, WBTV reported.

"That's a disappointment," Gov. Henry McMaster said in April upon hearing news of the dissolution in the deal between the Panthers, Rock Hill/York County, and the state. "I know that they've been trying to work it out. It could be nice if it could be worked out. That's what we were hoping for."

McMaster added that although he was uncertain whether the facility project could eventually be completed, he was emphatic that South Carolina would deliver on getting the I-77 completed in the next few weeks.

"We are well on track to make the May 23 completion date," Brian Stumph, operations manager of Charlotte-based United Infrastructure Group, told WBTV. The builder is working in a joint venture with Blythe Development in the Queen City.

He added the construction project is unique because of its timeline as the state agency just broke ground on the interchange late last summer. When finished, it will lead drivers to where the Panthers' facility could eventually stand.

But, like the governor, Stumph said that that it is getting completed regardless of what the Panthers decide to do.

"Our only slowdown's been weather and the winter, but we're making great progress in spite of that," he said to the Charlotte TV station. "We're focused on our contract, our schedule, [and the] deadlines we've committed to."

He added, "The more places you can come on and off [the interstate] leads to more economic development, makes it better for the motorist, [and] takes away congestion.'

The project is currently impacting traffic as the road has been seeing short-interval closures in the first week of May to allow crews to move steel beams needed for the bridge construction.