Despite Supply Delays, Construction of New Multi-Housing Unit On Schedule 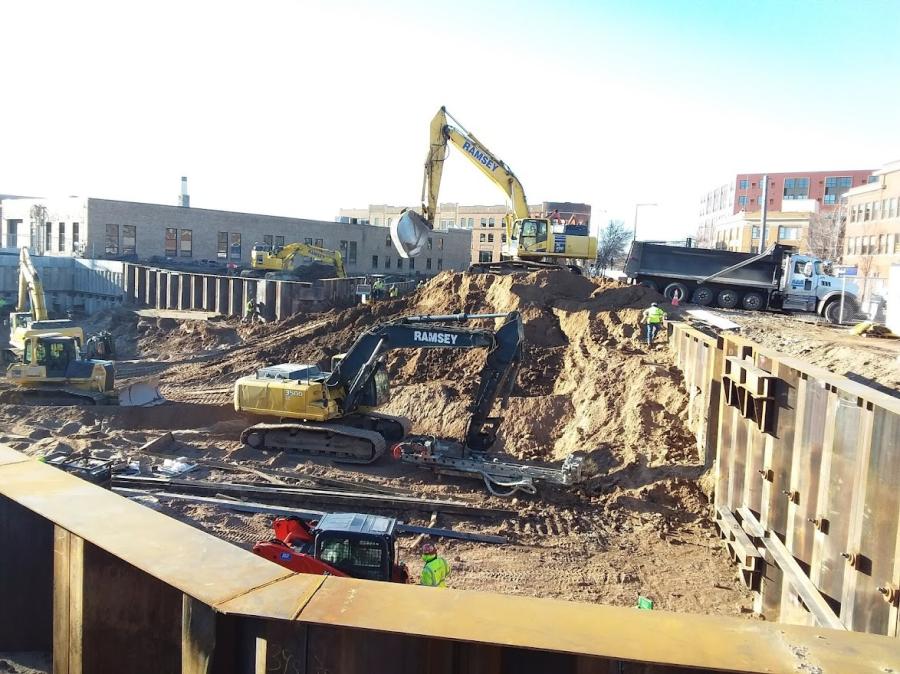 Kraus-Anderson Construction, headquartered in Minneapolis, took on the construction of this transit oriented multi-housing project with a bid of $44 million. (Ramsey Companies photo)

On a tight, little urban corner surrounded by high volume city arterials and commercial properties in St. Paul, Minn., construction continues a six story, 220-unit apartment building. To make room for the new complex on the 1.2-acre site, a U.S. Bank branch that occupied the property for many years had to come down. 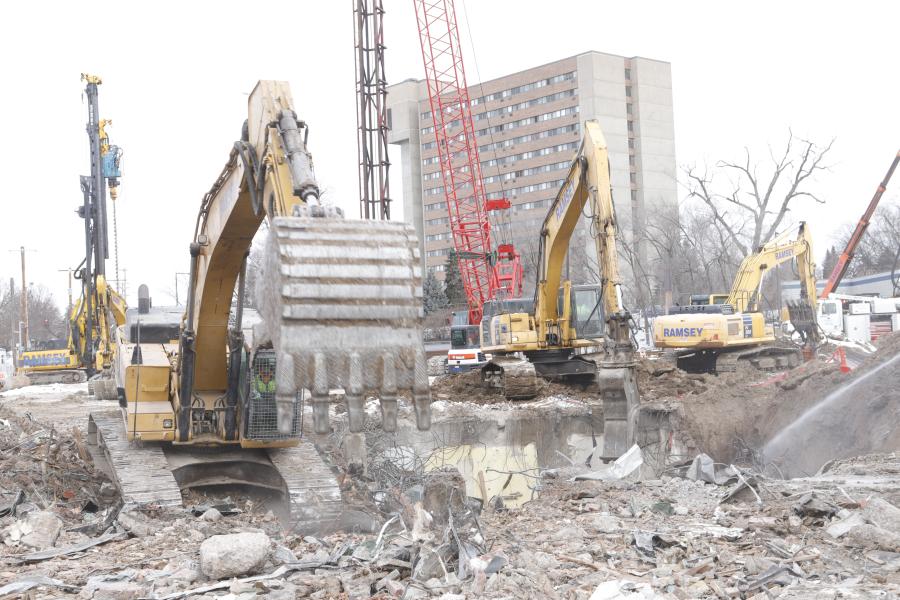 The newest addition to the Twin Cities light rail system, the Green Line, runs directly down the center of University Avenue between the two downtowns while the regional bus system continues to run for more frequent stops. Since the Green Line began operating in June 2014, University Avenue has seen a rapid growth in multi-housing units.

Along with the new housing, the avenue through the 11 mi. between the two downtowns is lined with a shopping mall in St. Paul and hundreds of other strip malls, smaller shops, restaurants and businesses.

The new apartment building, dubbed the MODA on Raymond for its location on a mass transit avenue, is less than 2 mi. from the Minneapolis campus of the University of Minnesota. Just beyond the campus is the downtown business and entertainment district of Minneapolis. The St. Paul campus of the University of Minnesota is located less than 2 mi. away.

Kraus-Anderson Construction, headquartered in Minneapolis, took on the construction of this transit oriented multi-housing project with a bid of $44 million. The company is a nation-wide construction management and real estate development firm.

According to a Kraus-Anderson press release, "the market rate apartment project was designed by Urbanworks Architecture, based in Minneapolis, to appeal to young professionals with on-trend, contemporary and transit-oriented lifestyles."

Ramsey Companies of Minneapolis took on the demolition, earthwork and foundation work for this project.

When completed in the summer of 2022, rental offerings will include alcove, studio, one-bedroom and two-bedroom apartments ranging from 500 to 1,100 sq. ft. with a scattering of larger units.

The C-shaped structure will cradle a courtyard with a pool between the main building and its two wings. While offering this outdoor lounge space on top, below the surface will be an underground storm-water infiltration system to drain into the municipal storm system.

Ramsey crews rolled in a variety of equipment to remove the existing building and excavate the site, including Cat excavators and dozers, a Komatsu excavator and a Hitachi Zaxis excavator.

As the new structure rose above ground level, crews brought in a Potain HDT 80 crane and JLG lifts. 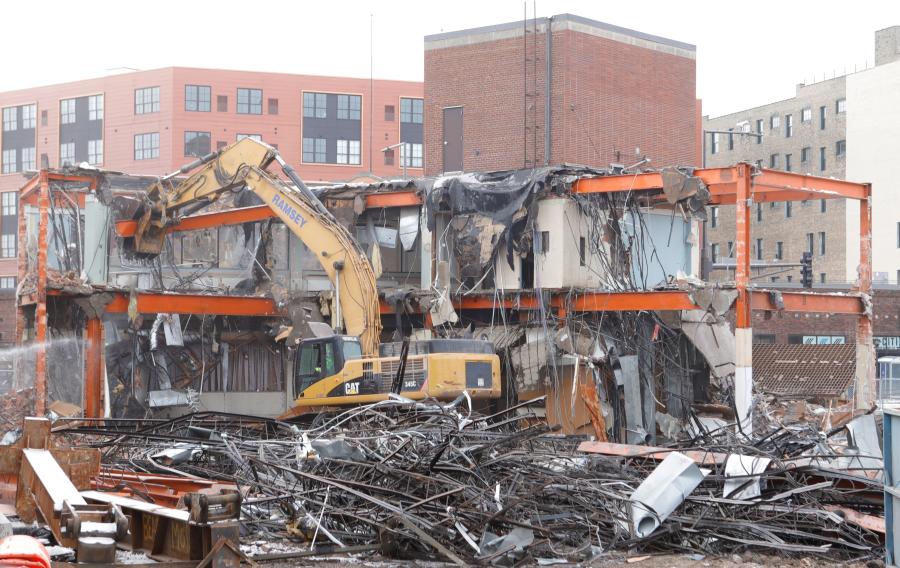 Construction began late in 2020 with interior remediation work. After several weeks of clearing out hazardous materials — mostly asbestos and lead — Ramsey crews tore into the existing building and had it on the ground within five days.

"The demolition of the existing U.S. Bank building was pretty straight forward," said Chris Knutson, project manager of Kraus-Anderson. "We did find that parts of the vault and airshaft into the building were underneath the right-of-way under the sidewalk. We had to grind out most of the concrete walls and fill it with clean fill and abandon in-place where we were not excavating inside the hole. But outside of that, the demolition went without a hitch."

As Ramsey crews continued through the last couple of weeks of January removing all the concrete and steel debris from the bank building, drilling and excavation crews moved in simultaneously to begin digging out the basement and set the foundations.

The tight, urban site and deep excavation two stories below grade came into play when designing the foundations for the new building.

"The foundations here are a little unique in nature. We have a permanent sheet pile foundation and two portions of secant wall foundations with a grade beam on top. They are driven to keep any tiebacks out of the right-of-way and avoid any easements on the property on an incredibly tight, urban site," Knutson said.

To support the footing foundation loads from the neighboring building pushing against the wings of the new building, crews constructed the secant wall foundations made up of a combination of over-lapping drilled caissons filled with concrete and I-beams.

Beginning at the northeast corner of the west wing, a Manitowoc 10000 lattice boom crawler and a CZM 200 drilling rig moved in to construct the secant wall foundations.

As Knutson explained, the secant wall foundation construction is a process of "drilling, pulling all the spoils out of the caissons and pumping concrete in them. Then at every other pile, they're dropping I-beams in place."

In detail, crews drilled 2.5-in. holes to a depth of 40 ft. with a 50-ft. auger and filled it with concrete from the bottom to the surface. Then, steel I-beams were pushed down to the bottom of each hole.

The remaining earth retention sections of the building are supported by permanent sheet piling driven into the ground by the Bauer RTG 20 pile driving rig with a hydraulic vibratory hammer.

During excavation operations, three excavators near each other operated at the same time to dig and load excavated soil to a parade of dump trucks to be carted off the site.

The excavator operators worked in coordination with each other with a pick and load system.

Crews ran into pockets of contaminated soil early on, mostly petroleum based, that were not expected in certain areas of the site. It wasn't a problem, though, that affected the schedule to any degree, Knutson said. 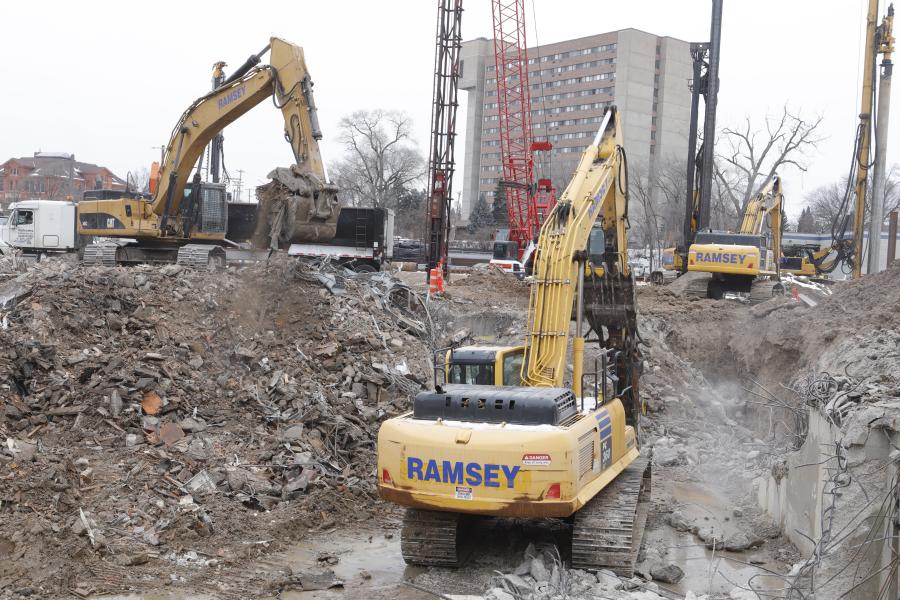 Skilled labor shortages and supply chain disruptions driven by Covid have been the main challenges facing Knutson crews and their subcontractors and have caused some delays.

"Overall, we're controlling the site well. We're managing and adjusting where we can and as needed with delays in window deliveries and some roofing insulation and minor delays in our wall panel and truss deliveries. We've been making adjustments where we can and accelerating the work when we can," Knutson said.

Construction will continue over the winter with a good amount of work to be done.

During the winter months, crews enclosed the building with windows and exterior facade while working on the interior build-out of the units and common areas. Through the spring, the final grading, flatwork, spa, site railings and landscaping will be completed.

The MODA on Raymond will be ready for occupancy this summer. CEG

(All photographs in this article are Copyright 2022 Construction Equipment Guide. All Rights Reserved.)