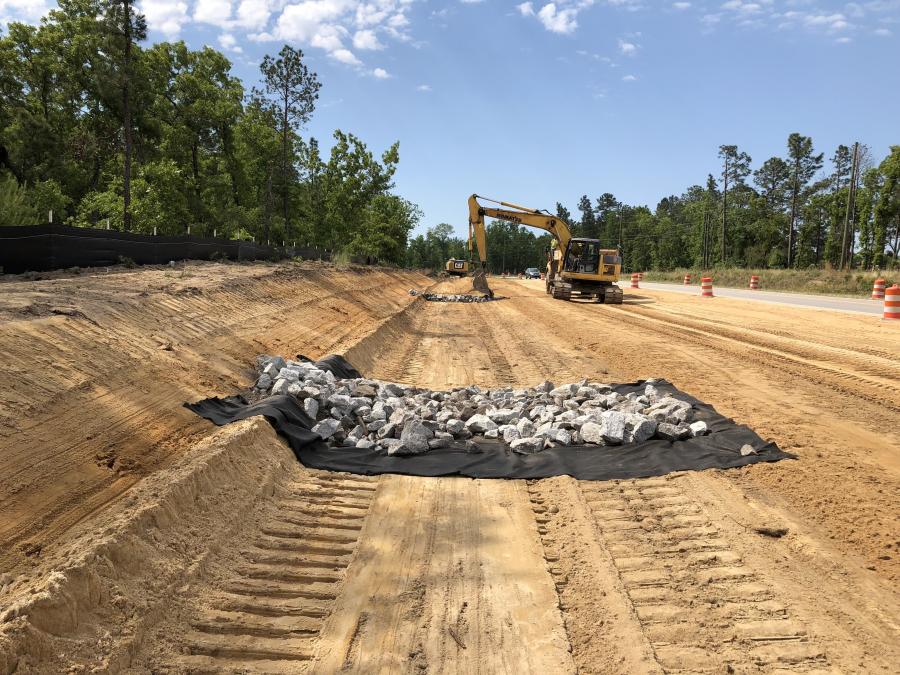 A $64 million project is widening an 8-mi. section of Hard Scrabble Road in Richland County, S.C., from two lanes to five.

In response to sustained growth in the northeastern part of the city of Columbia, Richland County, the South Carolina Department of Transportation (SCDOT) is widening an 8-mi. section of Hard Scrabble Road from one lane in each direction to a five-lane roadway with two travel lanes in each direction and a two-way left-turn median.

Work on the $64 million project, which began in December 2016, is being performed by Palmetto Corp. of Conway.

Palmetto was awarded the contract in July 2016, and its crews are expecting to deliver the completed project in mid-2021.

Utility issues have affected the project's initial delivery date, but Palmetto, with the support of SCDOT, is dealing with the issues and others as they arise. 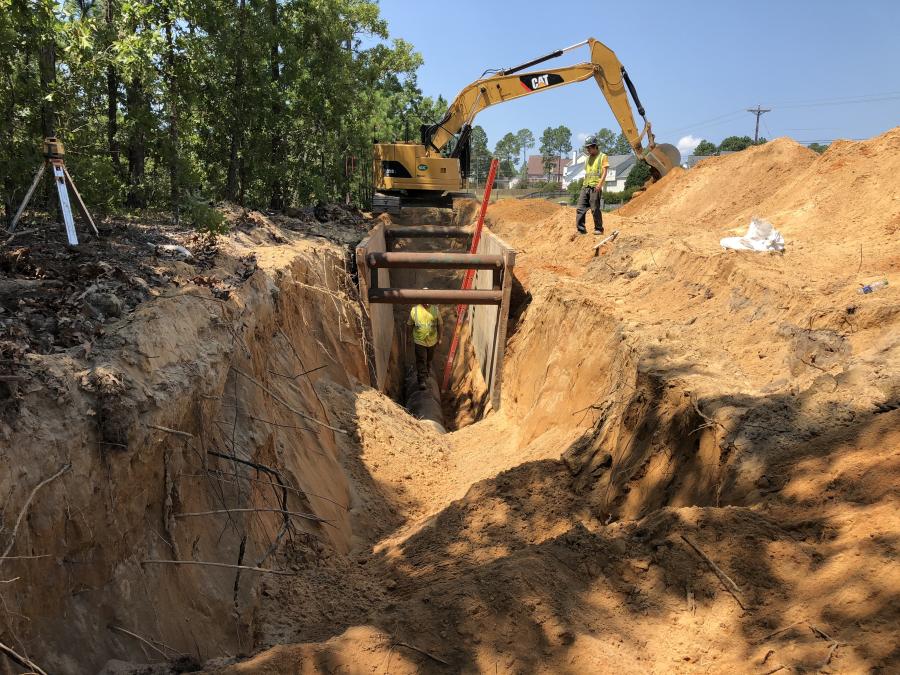 "SCDOT has partnered with the Richland County Transportation Program to widen and improve Hard Scrabble," said SCDOT Construction Engineer Derek Frick. "The new typical section will include sidewalk and bike lanes for pedestrian and bike accommodations. Due to the rapid growth and development of the northeastern part of Richland County, Hard Scrabble Road was one of many roadways that experienced an increase in traffic volumes over the past few years.

"Hard Scrabble has become overly congested, which not only results in longer travel times, but an increase in motor vehicle accidents."

The traffic in 2015 was 24,900 vehicles per-day, and it is anticipated that 49,600 vehicles per day will use the roadway by 2035, which is also the design year, with truck and delivery traffic factored into the lifespan.

To minimize the traffic impact, temporary alignments will be constructed to allow free flow of traffic during construction.

"This is especially the case for bridge work and areas where large amounts of fill are required," Frick said. "Construction staging and schedules are being developed to prevent impact to areas where schools are present while classes are in session. Work in close proximity to schools is being scheduled for the summer months. Traffic detours are being utilized to reduce impacts to traffic and also expedite construction.

"Road users and the community have been very understanding of delays and realize the need for the project," he said. "Residents that I have spoken to are excited to benefit from the widened corridor and look forward to a decrease in traffic congestion. SCDOT is excited for the opportunity to deliver this project to the road users of our state."

Rough grading began in January, but because of delays caused by other contractors relocating natural gas, electricity, water and sewer, cable, and AT&T communication lines throughout the project area, Palmetto is focusing on clearing and grubbing the areas to be widened. 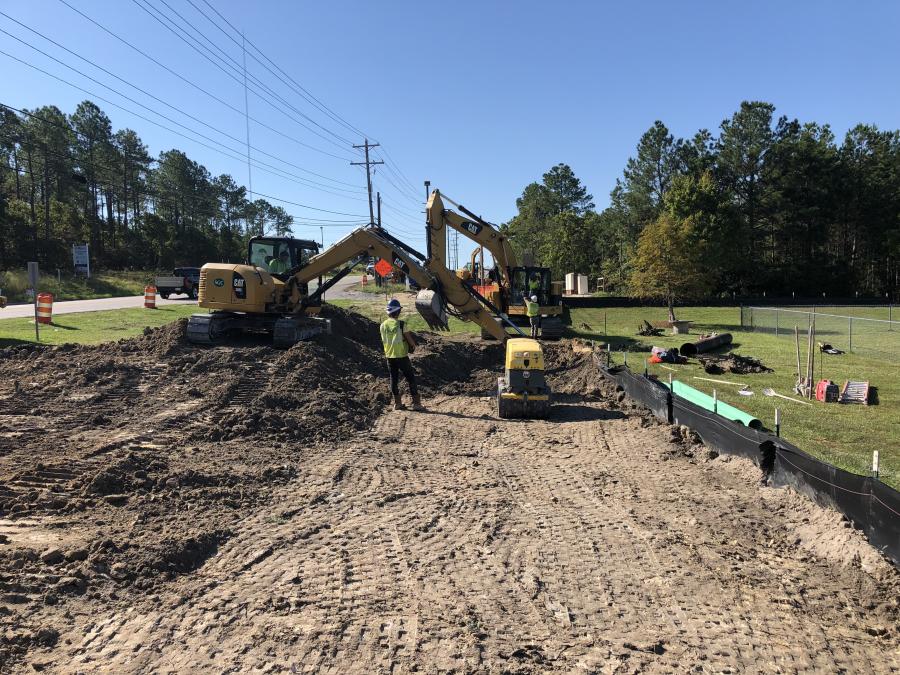 "We have a conflict with trying to work around utilities that are still operating and where utility relocation is ongoing," said Hugh Edwards, Palmetto's project manager. "The delays have put us out of phase with our intended schedule, and we're working in areas where we've got access and room."

Traffic and pedestrian safety also is an issue. An elementary school and a high school are located along the road, as are several churches, apartment complexes, subdivisions, businesses and a fire station, which frequently dispatches ambulances.

"I've done similar projects before and like those, there will be detours and lane shifts around Christmastime," Edwards said. "We'll start the widening operations in the spring."

As clearing and grubbing and rough grading operations move forward, a new waterline for city of Columbia water customers is being installed along the length of the project in coordination with the road widening. The waterline contractor is working under the roadway general contractor to help facilitate coordination of work activities.

"There are also a lot of areas that require fill in low areas that are wet," Edwards said. "To help with this, we're also installing prefabricated vertical drains, something I have not done before — it's a unique installation. The machine basically punches a hole in the ground to aid in displacing of ground water. It facilitates a wicking effect for drainage, so when you're putting in large fill, you have the pressure pushing down to make the ground water go up."

Erosion control also is crucial, as is compliance with regulations.

"We have a weekly inspection," said Edwards, "which produces a report for every rain event greater than 0.5 inches."

Preparation for bridge work has already started. One bridge, which is 120 ft. long and passes over Crane Creek, is being rebuilt, while a completely new 95-ft. bridge is being built over Rice Creek, where there are currently three culverts under the road.

Edwards has about 30 workers on site, which will peak at about 100, with several crews and multiple contractors when operations hit full stride. Subcontractors include Shady Grove Construction for water and storm drainage; Grant Electrical Contractors for signals; Republic Contracting for the bridges; and Hayward Baker for prefabricated vertical drains.

The amounts of materials to be removed and brought in are still being determined.

Palmetto Corp., which is based in the Myrtle Beach area, is expanding its areas of operations from Myrtle Beach through the Pee Dee area and into the Midlands area of the state, which includes Columbia. Palmetto now has the Midlands, Pee Dee, and Coastal divisions. 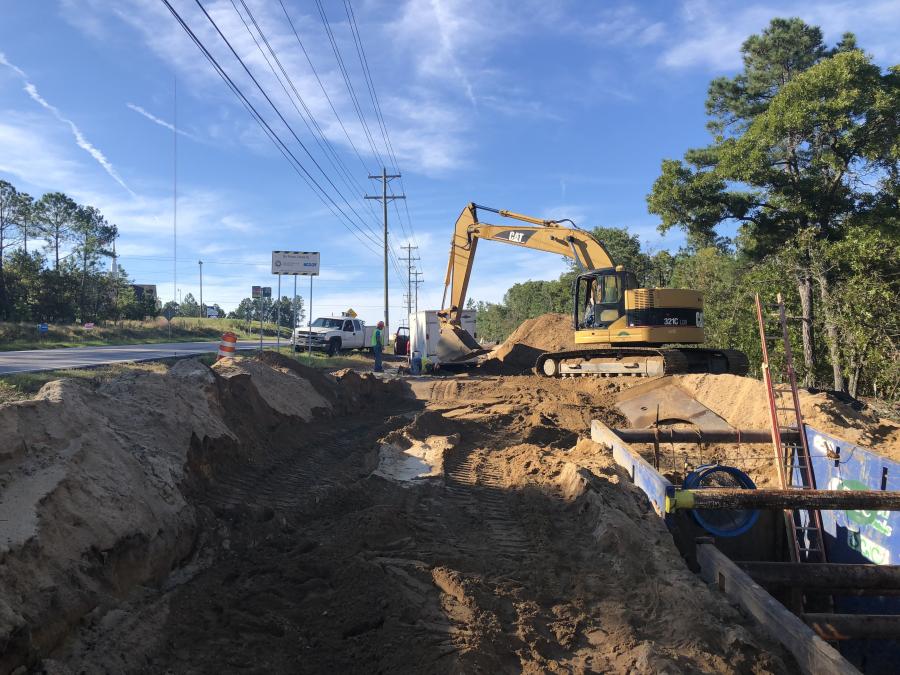 "I'm from Columbia, and the company is relatively new to this area," said Edwards, who has been in construction for 30 years. "We've got a good team, and a good business concept. And 15 minutes from the job site we have a new asphalt plant in Lugoff to facilitate this project and other paving projects in this area, as well as upcoming projects. A new gas tax in S.C. is going to be spearheading a lot of work for all the existing general contractors."

Wirtgen equipment will be brought in later on for milling and reclamation.

"Because we're dealing with the removal of lot of asphalt, concrete, and some rock, we're hard on our track hoes — having to replace bolts on the buckets to keep them on the boom and the teeth on the bucket itself," Edwards said. "We haven't had a whole lot of issues with tires, but we had to replace a lot of hoses due to small leaks that result in losing pressure on the hydraulic systems, whether it's a rubber tire backhoe or a bulldozer or a track hoe. Demolition is always hard on equipment."

Mechanics are brought in as needed, and dealerships such as Blanchard Cat and Linder Equipment are servicing vehicles under warranty.

"We get a lot of support from the standard manufacturers and dealership reps," Edward said. "For tools, we use HD Supply and White Cap hand tools. We have accounts with the local Napa and Lowes stores and we are getting our oil changes locally, so we're stimulating the economy." 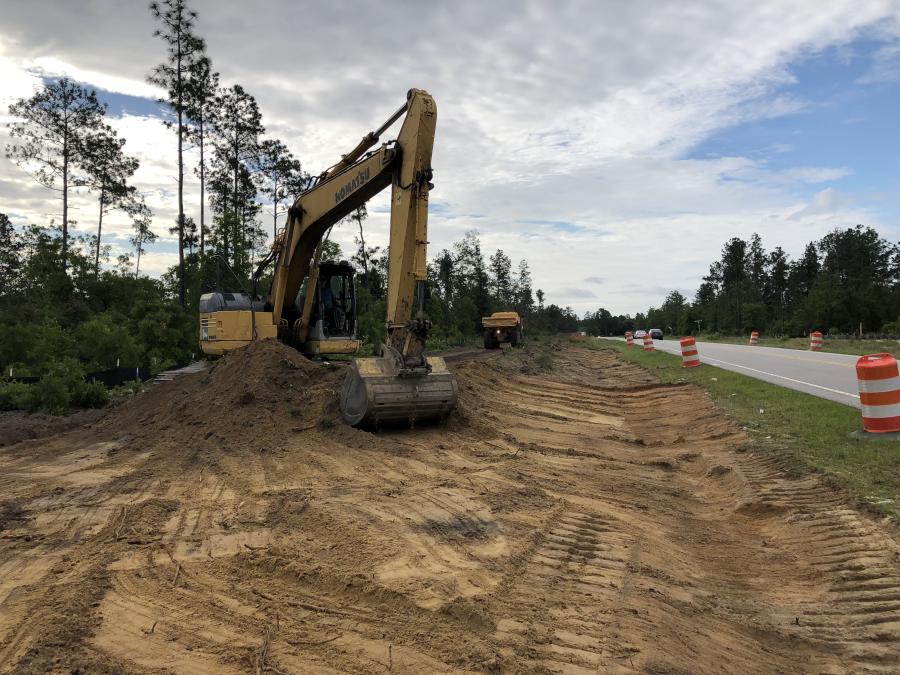 The project has Edwards doing public relations, too, especially in light of the utility delays, and both he and the project have been featured in many local newspaper articles and newscasts.

Palmetto also demonstrated its concern for the community in the aftermath of Hurricane Florence.

"We were not that affected," Edwards said, "but we took measures to keep the roadways clear and safe. We had around 1,500 traffic barrels and removed them so they wouldn't become projectiles in case the winds got over 50 MPH, and we did a lot of erosion control measures to control the water that we knew was coming.

"We made the job safe and sent everybody home to be with their families because some of workers live in the areas that were affected by the flooding."