More than an average of 1,400 workers are on site daily to get the massive sports and entertainment arena ready for its debut this fall. 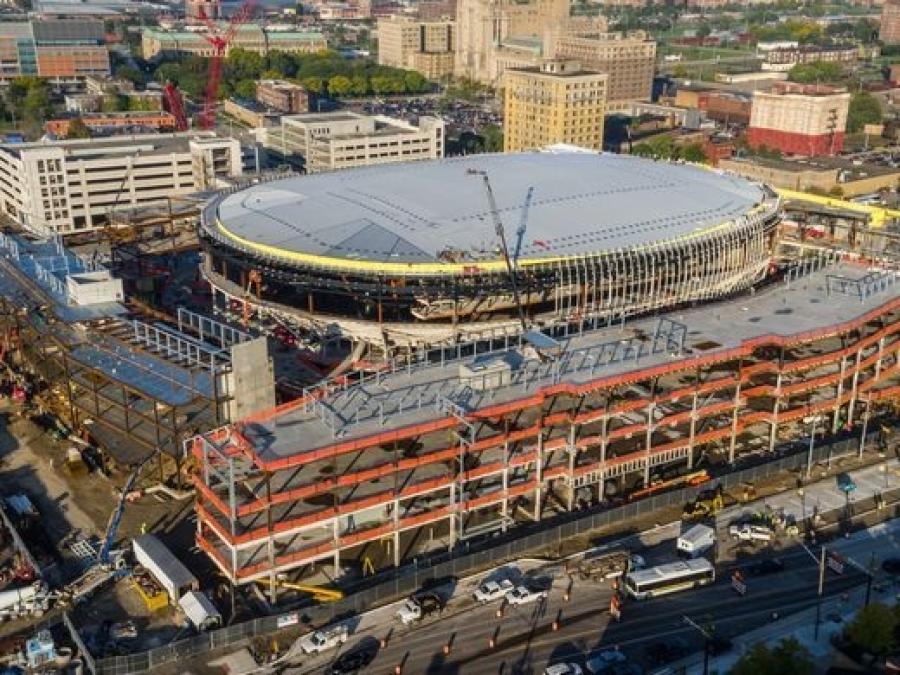 Metro Detroit added 2,900 construction jobs in the last 12 months and has one of the highest job growth rates in the county, officials with the Associated General Contractors of America said on Tuesday.

The association released its latest figures inside the under-construction Little Caesars Arena in Detroit, where more than an average of 1,400 workers are on site daily to get the massive sports and entertainment arena ready for its debut this fall. The crew worked more than 2 million man hours in the month of March alone.

Since September, more than 230 Detroit-resident apprentices have been working onsite at the arena, said Dannis Mitchell, director of workforce development with Barton Malow.

Of the 70 companies working on the arena project, 40 of them are Detroit-based, Mitchell said. That number exceeds the 30 percent requirement set for hiring Detroit-based companies, she said. No figures were available on the number of Detroiters hired, however.

“We want to thank Olympia Entertainment and the Ilitch family for taking a leap of faith in Detroit at a time it was needed,” Mitchell said. “We are seeing families starting to grow.”

Brian Turmail, national spokesman for the Associated General Contractors of America, said Metro Detroit added construction jobs at a faster rate than all but six of 358 metro areas during the past 12 months

Turmail said his organization is working with Washington officials to put in place pro-growth measures that would contribute to even more construction job gains in the future.

“Thanks to new projects like this arena and the related developments nearby, this area is now one of the fastest growing construction job markets in the country,” Turmail said.

AGC officials said the recent increases in construction employment in Detroit are a significant change from the multi-year construction downturn earlier this decade that eliminated nearly one out of every four construction jobs between March 2008 and March 2010, a loss of 5,100 jobs.

Turmail said nearly one-third of the construction jobs that existed throughout Michigan in 2008 had disappeared by March 2010.

But 92 metro areas lost construction jobs during the same time period while employment levels were stagnant in another 42 areas, Turmail said.

Darryl Massa, vice president of Granger Construction, said there is a workforce shortage across the state and nation. He added construction is the key to Michigan's future.

His company is trying to meet increased demand for workers and is holding a construction career days and a skilled-trades conference.

“We are trying to address finding workers and those people who may not want a four-year degree, and we need to put them to work in construction,” Massa said.