More than 10,700 homes, apartment buildings, schools and other buildings have been demolished by approximately 20 demolition contractors since 2014. 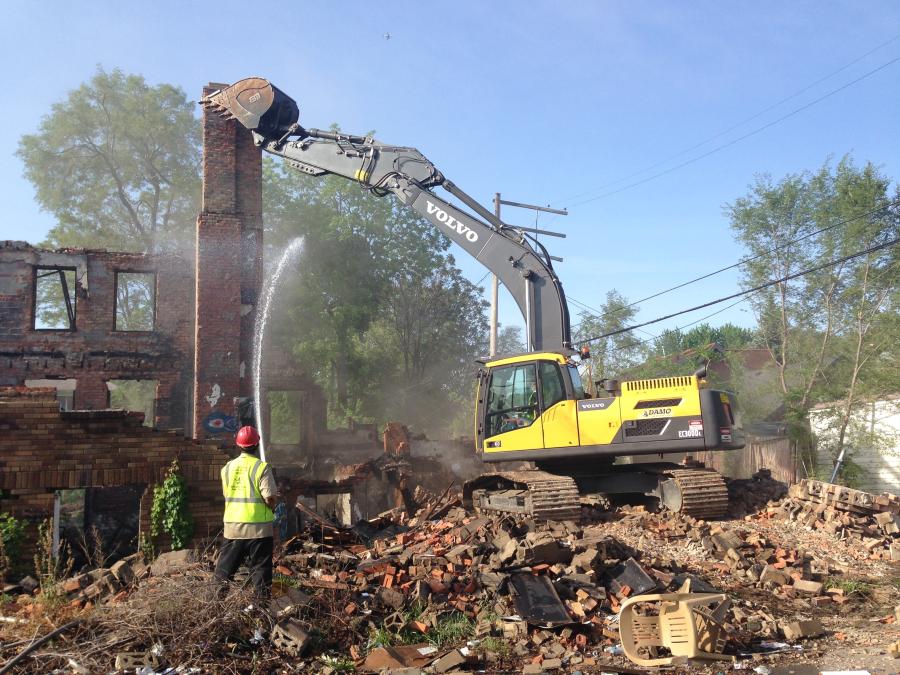 The municipal authority of Detroit has been engaged in a program to demolish nearly 40,000 structures across the city as part of its plan to rebuild and renew the city and spark reinvestment.

The municipal authority of Detroit has been engaged in a program to demolish nearly 40,000 structures across the city as part of its plan to rebuild and renew the city and spark reinvestment.

Thus far, more than 10,700 homes, apartment buildings, schools and other buildings have been demolished by approximately 20 demolition contractors since 2014 and the program is expected to be completed between 2020 and 2022. The properties are owned by the Detroit Land Bank and the demolitions are being managed by the Detroit Building Authority (DBA), which is handing out the contracts and taking all the necessary measures to minimize the complexity of the work.

The demolitions are expected to cost between $500 million and $1 billion and are being funded by the U.S. Treasury's Hardest Hit Fund.

The largest contractor, Adamo Demolition Company, has accounted for close to 2,200 homes and 200 buildings.

“We're not tearing down occupied homes,” said Brian Farkas, director of special projects of the DBA, “we're tearing down the worst of the worst — burnt out and fire damaged, collapsed, abandoned — you name it. It's very important that we don't move anyone and we'll work around occupied houses.

“Detroit has been demolishing houses for a long time,” said Farkas, who noted that the work is year-round. “We slow down a little bit in the winter, but we work through pretty much any weather.”

The project is providing work for demolition firms, asbestos abatement contractors and recyclers. Since the 1950s, Detroit has seen its population shrink from around 2 million residents to just under 700,000 today.

“We need everyone's capacity,” said Farkas. “The overall goal of our program is make the neighborhoods investment grade and to bring families back to them. The land bank owns about 80 percent of the properties and if there is a resident next door, they can buy the side lot for $100. We made the acquisition process extremely user-friendly to get this land into the hands of Detroiters. No one is going to invest next to a blight and our goal is to get rid of the blight.”

On average, between 100 and 150 homes can be demolished per-week and early on in the program, demolition peaked at 250 homes. Contractors have 30 days from the demolition to remove the foundation, fill in the hole, and then smooth and seed the property. Properties with debris piles or open holes are required to have secure orange fencing around them. Contractors are required to secure certificates from inspectors to confirm that the holes are free of debris.

Recycling programs for the homes are still being developed to remove valuable building materials.

“A recycling hub, called the deconstruction hub, is being scaled up with private money,” said Farkas. “Some of the houses have structural timbers that have old-growth virgin hardwood and if they are suitable, we can put them out for deconstruction first. After that, you have different types of waste that mostly goes into the landfill. Then you have your hardfill —cement, concrete, and similar materials. If that is not painted, the materials can be taken to a yard to be crushed and re-used for a different aggregate.

“We're still at the pilot phase of the reclamation,” he said. “We have a private group building the deconstruction hub at a city-owned building that they are renting.”

Before a house can be demolished, it must be surveyed for asbestos and hazardous materials. Inspectors identify the material that needs to be removed prior to demolition. With that report, contractors bid on the work — the most competitive bid receives the contract — and when the contract is issued, they are required to file a 10-day notification with the state and when they can do the asbestos abatement work to prevent the materials from becoming airborne.

Water is sprayed on the structures to minimize the dust from the demolition. A hole in the attic will be made and the house will be flooded.

“Most of the houses have asbestos — you can have something as small as pipe wrap and something as big as transite plaster,” said Farkas. “Most houses do not have the plaster and removing the wrap is about a half-a-day job, while transite removal takes about two days.”

DTE Energy Co., a Detroit-based utility, has been involved in the demolition program from the start and cutting and capping gas end electrical linkages when the asbestos surveys are being carried out. Demolitions can only occur when confirmations of the capping are secured.

“For water,” said Farkas, “most of the demo contractors can cut and cap the connections themselves so that they can keep up with the production level, because we have really ramped up production to huge amounts. If they have a problem and can't shut it off then we'll call the water department. I don't think anyone is going as fast as we are. We recognized early on that we had a large amount work ahead of us and we put together a best practices group that included the U.S. Environmental Protection Agency, the Michigan Department of Environmental Quality (MDEQ) contractors and health experts to design and revise the Detroit specifications for demolition to make sure that we put public health and safety first, because no one is going at this pace and this fast.”

Once the demolitions are completed, the rebuilding could result in billions of dollars of new investment and construction.

“Property values in some neighborhoods where we have done demolition have increased significantly,” said Farkas. “As study shows that for every dollar in demolition spending, we increase property values of properties within 500 feet by 4$.”

Moreover, the city is promoting the hiring of residents by the demolition contractors so they can be hired for the reconstruction.

“It would be one of the greatest legacies of this program to have them work for private companies that will be rebuilding Detroit,” said Farkas, who noted that other cities have been contacting the city to learn more about the demolition program and its methodology. “In a project of this size, you're going to have a lot of logistics issues. By listening to the contractors and asking them where the chokepoints are, what are the problems and their needs, we can help them out and streamline the process and do things differently to help them achieve their goals. We have bi-weekly meeting to address problems before they become problems and talk them out.”

Richard Adamo, Adamo's president, praised the city for its planning.

“We knew what we were getting into” he said, “but it has been a constant barrage of every week getting more requests to tear down houses and we still have the current work to finish. Without the city management there to help facilitate the administrative tasks associated with the work and being able to get in touch with the utility companies and work with them, this would never have happened.”

“At the beginning we didn't know where the buildings were located and there were random locations,” said Adamo, “and it was a fast-tracked program. But we knew there was going to be a lot of work and it was a question of lining up the manpower and equipment. Since we started, we've assigned anywhere from 35 to 55 new employees during peak performance and have had an average of 14 people on site.

The plan of attack is simple: One crew tears downs a house; another cleans up the debris, followed by a crew that removes the foundation; and ends with the last crew filling in the hole and grading the site. Adamo completed 19 homes, start to finish, in one day in 2014.

As the program proceeded, Adamo was awarded many structures within specified areas to maximize its crews and equipment.

“It was easier to manage, watch, and facilitate,” said Adamo. “It's been a little slow this winter, but the past couple of winters have been pretty busy. Our people are working year-round. It's easier to tear down an apartment building or school because you're not managing multiple locations. I prefer to do them because it is one location and you can have more people and equipment doing the work.

“You don't have to disturb the daily activities of the neighboring property owners,” he said. “Rats are not a problem as rats need food and there is no food in the buildings and homes. The houses have been abandoned for years and many were burned down. Nor are there many squatters to deal with. A lot of the houses were in such bad condition that they did not provide shelter.”

Adamo points out that his planners and crews have the demolition down to a science.

“We can do 200 to 300 houses a year on average and if asked to do more, we'll take it on,” he explained. “We're geared to handle large volumes and have proven our abilities to adapt. Tony DaGuanno, our project manager, has been in the business for over 35 years. He's managed a lot of tear downs and knows what needs to be done.

“We've seen the transition in the industry since 1964 and the changes in technology and equipment that have seen us go from wrecking buildings with track loaders to using hydraulic excavators with all kinds of tools from grapples, thumbs, and whatever. We're able to get a building down in the fastest time to get the job done and minimize our costs.

“Tearing a house down sounds simple,” he added, “but then you have the clean up and the filling in of the basements. At one point we were importing 3,000-plus cubic yards of fill a day. At one point you could drive down a lot of streets at the start of the project and there were a lot of open basements. It looked like Swiss cheese, but eventually we and the city got a handle on it and the city is expanding the demolition process.”

Securing fill material from brokers posed a problem at the start due to a major highway project occurring at the same time.

“There was a major shortage of fill,” said Adamo, “and we had to arrange for trucks to not only haul out the debris, but to bring in fill. This was a massive undertaking. Our hands were tied and it was a nail biter. Once you tear down a house, you own it and when you have 200 to 300 down, you need 20 to 30 trucks — you can't do it with four.”

Adamo likens it to running a small army and efficient army that is always on the move.

“Be it 600 to 800 homes or a smaller amount today,” he said, “they are all individual jobs and everyone wants to know about the house that was wrecked a week ago and 'how come it's not cleaned up yet?' My response is that 'we haven't got back there yet and we're on the other side of Detroit, working our way around. Clearing the debris and filling the holes takes time.

“This is a remarkable operation and it requires a tremendous amount of planning and scheduling,” he said. “We have four superintendents; four people dedicated to overseeing MDEQ notifications, doing the paperwork, tracking the loads of fill material, and getting the clearances for the utilities to apply for permits; another person to track day-to-day trucking; two to three people to handle the billing process, and we have had our CEO, CFO, general manager, and my myself on board. This is like nothing we've ever done before.”—CEG