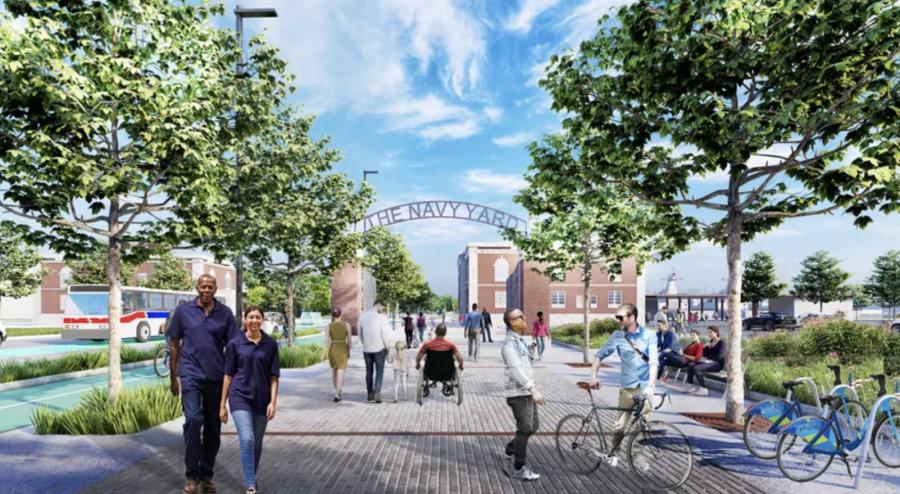 The redesigned entrance to the Navy Yard on South Broad Street. (James Corner Field Operations, courtesy of PIDC and Ensemble/Mosaic)

The developers behind the revitalization of 109 acres at the Philadelphia Navy Yard unveiled a new plan June 28 to bring $6 billion in investment to the site over the next two decades, with the hope of creating a new neighborhood in the city.

The Philadelphia Inquirer reported that the enterprise is estimated to bring 12,000 new jobs to the Navy Yard, as well as 8.9 million sq. ft. of residential, commercial, retail and mixed-use space.

In total, the project's Philly-based developers, Mosaic Development Partners and Ensemble Real Estate Investments, plan to build nearly 4,000 residential units and 235,000 sq. ft. of retail and manufacturing space at the South Philadelphia site under the deal they have with the Philadelphia Industrial Development Corp. (PIDC), which manages the Navy Yard on the city's behalf.

With those additions, the hope is to create a "real Philadelphia neighborhood with density, mix and a broadly appealing identity" that will become "one of the world's foremost urban transformations," said James Corner, founder of James Corner Field Operations, an urban design studio in New York City.

The presentation showcased a new version of an initial plan from 2021 that called for a $2.5 billion investment to develop three million sq. ft. of space at the site along the Delaware River. The latest plan, according to Corner, builds on the Navy Yard's designation as a base for health and life sciences by going beyond office, manufacturing and laboratory space.

He told the Inquirer that the idea is to "create a new community," complete with 37 acres of open space for recreation, a more developed waterfront along the river, and hospitality space totaling 440,000 sq. ft. The plans also call for 1.5 million sq. ft. of life science and manufacturing facilities, 2.8 million sq. ft. of office and laboratory space, and 250,000 sq. ft. of retail and market space.

"In sum, the 2022 plan update envisions the neighborhood as the best of what a mixed-use campus and city neighborhood can be — green resilient, mixed, diverse, inclusive, welcoming and vibrant," Corner explained.

Inclusive Practices to be Followed at Navy Yard

The Inquirer noted that the Ensemble-Mosaic development team previously announced a commitment to a fair, inclusive development at the Navy Yard, pledging to use $1 billion to hire workers and contractors from underrepresented groups, as well as institute other diversity and inclusion measures over the next 20 years.

The design and planning process has so far involved more than a dozen companies owned by women and underrepresented groups, with approximately 49 percent of the project costs to date having gone to those companies, PIDC said in a statement.

The developers intend to set aside 15 percent of the site's apartments to be offered at affordable rates and subsidize 25 percent of retail for businesses owned by women and the underrepresented. The team also hopes to expand accessibility for the Navy Yard with new bike lanes, bus rapid transit routes, pedestrian-only plazas and streets, and a new gateway to the area at its Broad Street entrance, the daily Philadelphia news source reported.

"The Navy Yard has been an anchor and economic driver for Philadelphia for more than two centuries," Mayor Jim Kenney said in a statement. "I look forward to its bright future for continued investment, entrepreneurship and employment in Philadelphia." 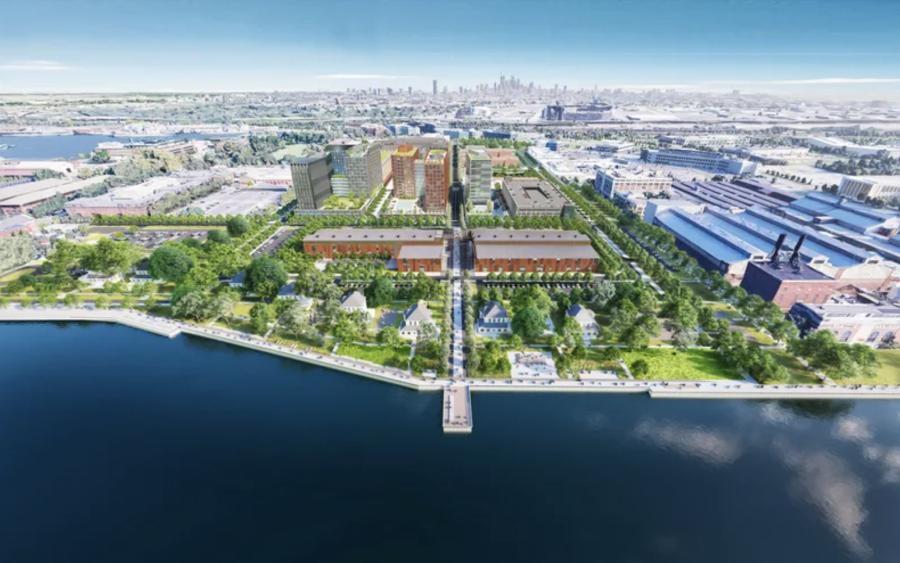 An aerial view of the proposed development plan for the Navy Yard. (James Corner Field Operations, courtesy of PIDC and Ensemble/Mosaic)