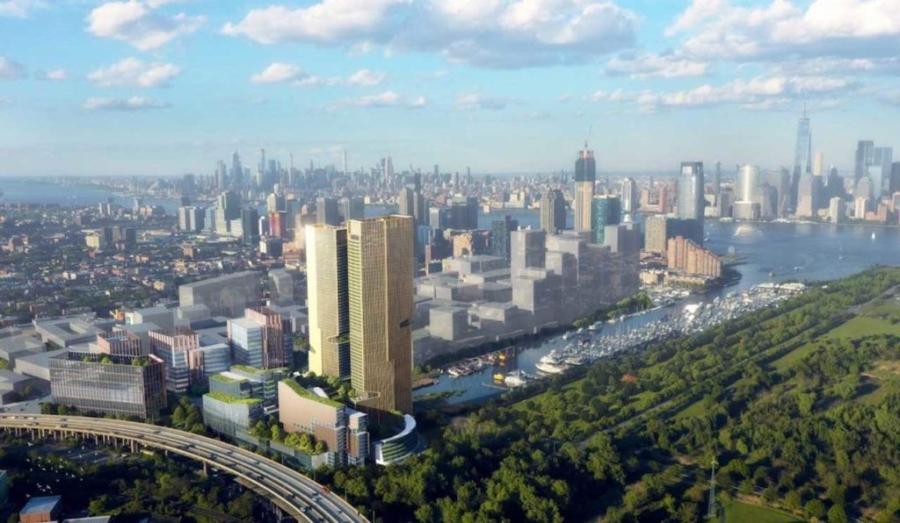 A joint venture between Argent Ventures and the Canadian-based H&H Real Estate Investments Trust is in the preliminary stages of transforming 18 acres on the Hudson River waterfront of Jersey City, N.J., into "The Cove," a $3 billion mixed-use campus.

Favorable zoning allows for multiple uses at the new development, including residential, office, retail, hotel, laboratory and research facilities. As a result, The Cove will offer 1.4 million sq. ft. of lab and office space for life science and other tech users at rental rates lower than those found across the river in Manhattan.

The Cove looks to draw upon the region's numerous life-science employers, New Jersey's sizeable life-science labor force and Jersey City's urban dynamic in a state where most lab space is within suburban office campuses built decades ago.

Additionally, local regulations will permit up to 2,840 residential units at the development.

The Cove will feature bold architectural designs and bring a completely new vision to the area bordering the New Jersey Turnpike to the west and downtown Jersey City to the north. To the east, residents and workers at the campus will be afforded spectacular views of the Manhattan skyline when the project is complete.

An initial set of renderings released by Argent show a slew of buildings at the sprawling property, but the first components of the development would fall along the portion of the parcel near Liberty Landing Marina, reported Jersey Digs, the real estate and development news website. They include a planned two-acre public park consisting of an ecologically restored tidal salt marsh surrounded by two mixed-use towers.

In 2020, New Jersey-based land-use consultancy Dresdner Robin performed an initial $10 million environmental remediation at 18 acres of property along Jersey Avenue and Aetna Street. The site is also just south of Jersey City Medical Center and next to Liberty State Park.

The next phase of the project will focus on infrastructure improvement design and permitting. The work will be performed in coordination with the Jersey City Redevelopment Agency (JCRA) and the Jersey City Municipal Utilities Authority.

Jersey Digs recently noted that a series of land-use permits are expected to be submitted to the state's Department of Environmental Protection in the coming months as part of the next phase. When construction on the property starts this summer, according to Argent, a site elevation of 10-12 ft., as part of resiliency efforts, will be undertaken.

Dresdner Robin, the provider of environmental, civil engineering, surveying, and planning services on the development of The Cove, highlighted sewer upgrades in a statement heralding the progress and noted that the endeavor includes a large subsurface overflow storage chamber that will be used to temporarily store discharges during heavy rain events.

"This is not a typical redevelopment project," Dresdner Robin's Director of Environmental Services Doug Neumann told Jersey Digs. "It is without question the most complicated remedial project that I have been involved with."

Ennead Architects, from New York City, has been brought in to design the proposal. Renderings from the firm show one residential tower would be slated for the area just north of the marina, while the second high-rise would be situated near the entrance to Liberty State Park. Illustrations show extensive walkways and open space between the towers and the various lab buildings that will make up The Cove.

Argent will need to obtain additional approvals before construction of the towers can begins. For instance, approvals from Jersey City's planning board are still needed, and it appears as though Argent has yet to submit a formal application to officials, according to Jersey Digs on April 12.

Despite that, the company has announced that it expects construction to commence on The Cove's initial towers in 2022, which should closely coincide with work wrapping up at the nearby Jersey Avenue extension over Mill Creek.